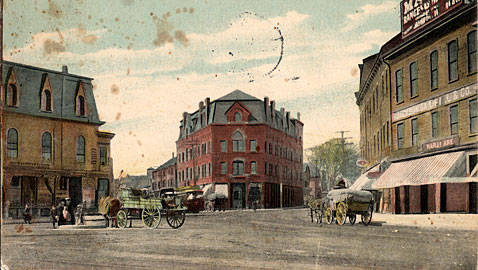 A detail from a postcard shows Somerville’s Union Square in 1908. (Photo of the postcard: Jeff Myers)

Somerville has released its plan for major redevelopment in Union Square over the next few decades, and Somerville Patch has the rundown, including the 146-page document.

The plan designates nearly 117 acres of Union Square as a revitalization district, and it calls for the city to acquire seven key “development blocks” — currently assessed as being worth around $26 million, in total — for future disposition to developers.

Most immediately, the plan calls for the city to acquire a number of properties — between Prospect Street, Somerville Avenue and Allen Street — to create a development block that would be home to a future MBTA Green Line station. This parcel, called the “North Prospect Block,” would be set aside for the development of retail, restaurant, office, research and development, and residential space to coincide with the station.

The rest, by Somerville Patch’s Chris Orchard, is here.

The green line extension project that includes Union Square is supposed to move Cambridge’s Lechmere stop to the NorthPoint development side of Monsignor O’Brien Highway; add a one-stop spur to Union Square, roughly where Prospect Street and Webster Avenue meet; and lengthen the line through Somerville into Medford, including to Brickbottom, Gilman Square, Lowell Street, Ball Square, College Avenue and finally to Route 16, to a site near the Starbucks, Whole Foods Market and U-Haul depot. Officially, after a first announced delay, all but the outermost stop were to be built by October 2015. Another delay has the project done as late as 2020 but only as early as 2018.