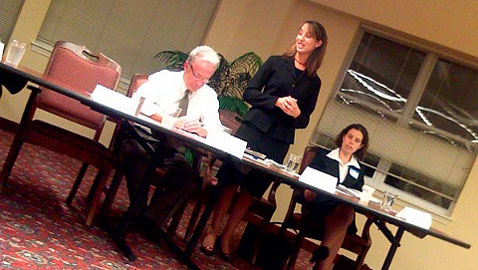 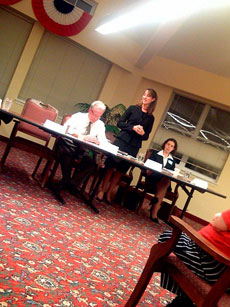 “I’m not sure my office hours would be legal in the city from what you just read,” alderman at-large Dennis Sullivan told Rebekah Gewirtz, who explained that she discovered the surprising ordinance this summer when musicians in Davis Square were asked by police officers to show performance permits that the city does not have or issue. Among the musicians was former “Cambridge Rag” cable access host Roger Nicholson.

Cambridge Day reported on the clashes and First Amendment issues in August here and showed the roots of the confusion here.

“I have considerable concerns about that with respect to First Amendment rights to free speech,” Gewirtz said in early August, after reading the current ordinance:

No meeting shall be held and no person shall deliver a sermon, lecture, address or discourse, or shall sing or play or perform on any musical instrument, in a street or other public place, except in connection with a funeral or a military parade, and except in connection with a procession of a political, civic or charitable organization for which a police escort is provided by the chief of police, unless licensed thereto by the board of aldermen, as hereinafter set forth.

She’s still pursuing a legal opinion of the law and plans to set a date soon for a committee hearing to address the permitting issue, she said last weekend.

Not all Somerville aldermen were alarmed by the First Amendment ramifications of the law. As quoted in the Patch, alderman at-large John Connolly felt ironing out the question of permits took precedence over wondering about the rights of people to perform music — or much else — in public.

“What we really have is not so much a constitutional issue but a lack of a policy,” Connolly is quoted a saying.

The Patch article is here.