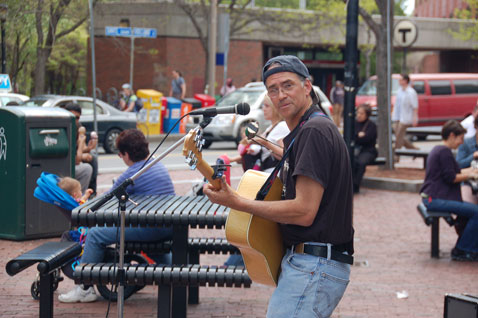 A busker plays in Davis Square, Somerville. A handful of noise complaints have brought musicians into conflict with police who think performance permits are being issued by the city. (Photo: Chris Devers)

In an interview last week Chief of Police Tom Pasquarello cited a city ordinance — one Gewirtz said she was likely to move to repeal on First Amendment grounds when her board meets next month — and noted that “it does talk about specifically there is a license and it talks about the license fee which will be set from time to time and which is on file at the city clerk’s office.”

Long, though, also spoken to last week, said there had been no permits for street performers for some four years, and that it has been only recently that a real need for them has become obvious.

“We never used to have people who wanted to perform in Davis Square, so we never needed a street performer permit,” Long said, but the square has evolved since the T arrived in 1984. “When people first said ‘I want to set up in Davis Square,’ we tried to use the public event permit, but then that clearly was not working well for the musicians … It requires people to write down on a piece of paper when they’re going to perform and what hours they’re going to perform, and about a month in advance. That’s fine if you’re organizing a parade down Highland Avenue but doesn’t work so good if you just want to play on a nice night.”

When the difficulties became obvious, “we said, ‘Well, let’s see if we can get away without a permit. But if someone asks you to move or turn it down or if there’s another musician playing, please, we’re not trying to create problems in Davis Square,’” Long said. “And that worked for about four years. This is the first year, to my knowledge, there’s been a problem.”

Street musicians such as Roger Nicholson, the former Cambridge Community Television host, have told of a handful of encounters with Somerville police that have turned nasty as officers ask to see permits that the performers do not have. In scenes out of Kafka or “Catch-22,” Nicholson said that when he’s objected to the officers that no permit is needed to perform in Davis Square — a fact confirmed by Long and the aldermen — he has been threatened with arrest for disorderly conduct.

Pasquarello knew of at least one of these confrontations, referring to an incident whose basic facts were confirmed by Nicholson, in which a musician playing amplified music in Davis Square after 10 p.m. was approached by an officer:

[Nicholson], who was in the process of leaving, raised the issue and said, “You don’t need a permit, I’ve never had a permit, and he can play if he wants here,” which was not accurate. And that’s when it started: “No, that’s not the case. You do need a permit to play, you do need a permit to be here.” The fact that sometimes the permits aren’t being asked for is because we’re not responding to the call of a disturbance. That’s basically what it came down to — because we were responding to a complaint, that’s what required the asking of a permit. If something else manifests from that, that the person becomes disorderly, they don’t want to break down their equipment and they continue playing, that is disturbing the peace or is disorderly conduct.

Many complaints have come from Connolly, who describes himself as living some 150 yards from the area known as Statue Park or Davis Square Plaza, as well as keeping a business office there and having a 22-year history representing Ward 6 before it went to Gewirtz in 2005.

When the wind’s blowing right, amplified music from the square can drown out conversation with family and friends, he said, and neighbors come to him with the same complaints.

“I enjoy music as much as anybody, but sometimes when you can’t adjust the volume or make the selection you’re not as thrilled,” Connolly said. “To get drowned out by an overzealous performer in the square can be a little annoying.”

He recalled previous summers being worse than this one, and he said the city had been trying to avoid putting a formal process in place and to let neighbors and police handle the situations as complaints arise. If it gets to the point permits can’t be avoided, there will “more than likely” be an administrative fee or processing application fee involved, and performers will have to apply for certain nights or times — exactly the problem the city clerk described from four years ago.

Pasquarello, hired as chief in 2010 (he grew up in Cambridge, where brother Frank served until recently as public information officer for the police), would likely not know the history. But  Connolly didn’t realize that his noise complaints were reaching officers who also weren’t aware of the facts.

“As far as I’m aware, they must have a pretty good idea,” he said of the police officers. “I happen to know there aren’t permits that are being issued right now, so it wouldn’t be a difficult matter for them to check.”

Pasquarello, though, sees only a city ordinance that is “very clear about what’s required.”

“It is an awkward situation,” said Long, the city clerk, and an imperfect solution — that street performers can play without a permit, but “if someone wants them to move or turn it down they should move or turn it down” — that will be solved only when aldermen tackle it head on.

As with Cambridge’s City Council, aldermen in Somerville are on a summer break from a regular meeting schedule. Gewirtz said that at the first scheduled meeting back, Sept. 13, she will likely be asking for repeal of the ordinance.

Before that happens, though, Long may be forced to provide an awkward solution.

“I guess the answer is that we have a permit process that is unwieldy for street performances. Several years ago we tried to do away with the permitting process and allow street performers to perform without a permit, and that worked for several years.” Given the problems this year, he said, “I will go back to passing out the unwieldy permit again until there’s a legislative solution.”