Cambridge has 17 new parks for the day, some for games and reading, some for the dogs 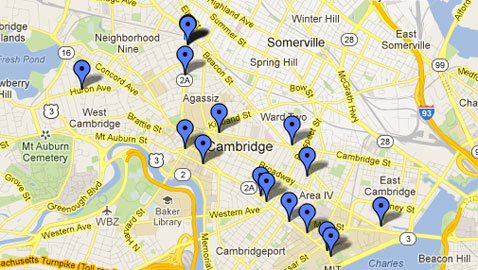 Cambridge has 17 new parks for the day, some for games and reading, some for the dogs

It’s Park(ing) Day around the world, when artists and activists claim parking spots and transform them from places for cars to places for people — usually a minipark, although minitheaters and minicookouts have been known to spring up as well.

There are 17 miniparks in Cambridge today, stretching from the Friends of Tobin park in the Huron Village (where they’re making costumes for next month’s Honk! parade) to the East Cambridge Dog Owners’ spot in Kendall Square. A map of them is here.

The staff of Cambridge Community Development, which organized Park(ing) Day in Cambridge, has a park in Porter Square where they invite people to play cards and games such as Trivial Pursuit and ladder ball; The Democracy Center has transformed a spot in front of 45 Mount Auburn St. into an outdoor living room “where people can take a load off and partake of various international newspapers, magazines and journals” as well as learn how to fold geometric origami.

Other parks have an environmental bent, including the nonprofit Oceana’s park at JFK and Brattle Streets in Harvard Square, where members hope to warn people of the dangers of seismic testing and offshore drilling; the Cambridge Energy Alliance, also near Porter, which is hosting a spot looking at Cambridge’s solar potential; and CitySmart, yet another Porter spot, where members say they are highlighting alternatives to driving (magic carpet and a witches broom included).