Tuesday is deadline to claim parking space for your own minipark 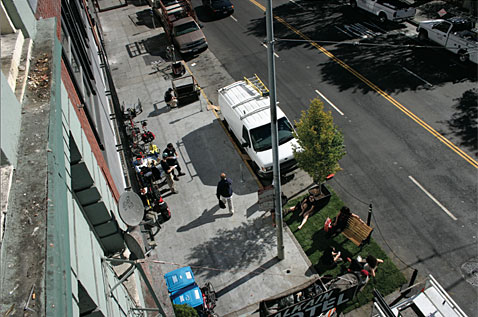 Tuesday is deadline to claim parking space for your own minipark

An image provided by art and design studio Rebar shows a classic use for a parking space on its Park(ing) Day. (Photo: Rebar)

If previous Park(ing) Days are anything to go by, spaces around Cambridge and more than 100 other cities around the world will be cordoned off and filled with grass, benches, grills and even stages for tiny theatrical performances — part of an annual event that began in San Francisco in 2005 when a year-old art and design studio called Rebar took over a single parking space.

“We approach the metered parking space as a short-term lease, and as long as you’re paying the parking meter, you can rent the space for a variety of different activities. It doesn’t have to be just the storage of a private vehicle,” Matthew Passmore, a Rebar principal, explained to NPR’s “All Things Considered” six years ago.

It was a simple affair, Rebar says on the event’s website:

Our original park stood in place for two hours — the term of the lease offered on the face of the parking meter. When the meter expired, we rolled up the sod, packed away the bench and the tree, and gave the block a good sweep and left.

It’s grown from guerrilla art project to municipal tradition rapidly, and cities such as Cambridge now seek out participants. (As of Monday, there are 10 citizen applications, City Manager Robert W. Healy told the City Council.) The city’s Community Development Department gets people thinking about it this way:

Have a great idea for transforming a parking space into a park? Let us know about it! Previous years have focused on many different themes including, but not limited to: Shakespeare in the park, lemonade stands, book swaps, hula-hoop lessons, chalk drawings and music … The mission of Park(ing) Day is to call attention to the need for more urban open space, to generate critical debate around how public space is created and allocated and to improve the quality of urban human habitat … at least until the meter runs out!

No selling or political use is allowed and, in Cambridge, no cooking (or drinking of alcoholic beverages) The city also asks that its “street artists” fill out a form to participate, after which it will take responsibility for securing traffic-related permits, promoting the event with the department’s website and Facebook and Twitter accounts and creating a map of Cambridge parks. The forms and more information are here.

The deadline for submissions, though, are Tuesday. They should be sent to the department’s Jennifer Lawrence.