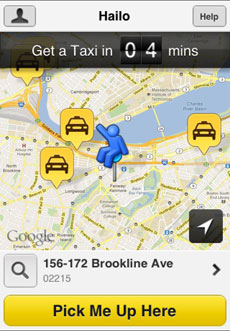 Hailo’s smartphone app is designed to summon a cab in two steps, company officials say. The company launches in the United States on Wednesday in Boston.

Hailo, which counts three London cab drivers among its six founders, puts equal emphasis on giving drivers tools — for instance, to navigate city streets — as well as giving consumers the ability to summon a car with just a couple of taps on a smartphone. Credit card information is on file and billed automatically, but from information tallied up by the cab’s own meter, which dodges the GPS-estimation issues hounding Uber as that company rolls out in cities around the country.

“We always go in and talk with major stakeholders to make sure what we’re doing does not breach the rules,” said Ron Zeghibe, the chairman and a founder of Hailo. “We have found consistently that we’re either given formal licensing [or can operate without]. In Toronto, we’re a licensed service. In Boston, we went and talked to the regulators and City Hall and they were very happy … they didn’t feel it was necessary for us to get formal licensing.”

There are some 1,825 taxi medallions in Boston, and Hailo is launching with more than 650 registered drivers, Zeghibe said in a Tuesday call. There are also thousands of users primed to go and already getting e-mail alerts that they can download the app and start using Hailo on Wednesday — theoretically, as of 12:01 a.m., but really whenever Hailo-using cabbies hit the streets.

The system launched in London in November, where it has 7,800 registered drivers using the system daily, he said, and more than 200 joining each week. The company is privately held and doesn’t release financial information, but Zeghibe noted that use is growing despite the company doing no marketing — in part because the drivers themselves help sell it. In Dublin, Ireland, as well, Hailo’s 2,000 cabs instantly makes it by far the largest car service in Ireland.

Uber, which has been focused more on livery-car service through its smartphone app, has far fewer cars in London since its launch in July before the Olympics.

While Uber didn’t have those figures available, it acknowledges Hailo as “a very strong player in London” and benefiting from its use of the city’s iconic black cabs, said Michael Pao, general manager for Uber in Boston. “We’re certainly more of a newcomer than a dominant player in London.”

As for Boston, “Competition is normal in any market. Our partners are used to competition,” Pao said. “It’s certainly going to be interesting.”

Zeghibe grew up in Boston, but the choice of launching here wasn’t sentimental, he said. “It’s relatively small compared with New York, but very much a taxi town,” he said Launches in New York  — where Uber said today it was ending its taxi experiment — and Chicago are planned and Washington, D.C., is mentioned as well. London, meanwhile, made sense not just because it is where Zeghibe lives now but because “it’s the biggest taxi market in the world. If we could make it work in an environment like that, we could make it work anywhere.”

“It’s a 400-year-old industry in London. If you don’t understand that industry intimately, you’ll fall flat on your face,” he said.

Uber’s initial model of using livery services instead of taxis and its GPS-estimated, automated billing of credit cards has drawn lawsuits in some cities and states, and Massachusetts’ Division of Standards filed its own order to stop the company’s local operations in August. The state quickly withdrew, though, and Cambridge filed its own lawsuit in September. Some city councillors and residents object to the city pursuing a lawsuit even the state doesn’t support, especially when Cambridge tries to project an image as a home to innovation. Councillors held a 40-minute closed-door session Monday to assess where it stood on asking the city to withdraw the suit.

In the meantime, Uber continues to operate in Cambridge but not to market itself here, Pao said. The free-taxi offer through Thursday — it actually covers only the first $25 of a cab ride — is for all of Uber’s coverage area in Greater Boston, but only for Boston cab drivers who cannot come to Cambridge to pick up fares.