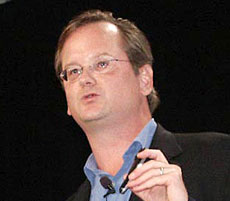 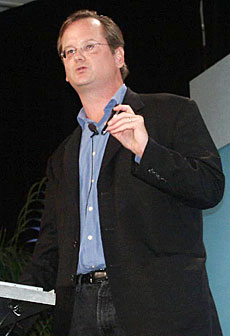 Harvard law professor Lawrence Lessig speaks in 2004 at an event in San Francisco. As a foe of corporate influence in politics, Lessig has endorsed the 26th Middlesex District campaign of independent Mike “No Money” Connolly for its refusal to take contributions of money. (Photo: J.D. Lasica)

Candidates for state representative in the 26th Middlesex District are touting their endorsements as they heading into tonight’s Cambridge debate.

While incumbent Democrat Tim Toomey boasts the backing of more than a dozen labor groups, for independent Mike “No Money” Connolly the big get is Harvard law professor Lawrence Lessig, a natural considering his vow to take no money as campaign contributions and spend as little as possible to get the seat.

Lessig wrote “Republic, Lost: How Money Corrupts Congress — and a Plan to Stop It” and founded Rootstrikers, a nonprofit, nonpartisan organization that sees money in politics as the root of America’s problems. His endorsement follows Noam Chomsky’s implicit endorsement via a “donation” of zero dollars to Connolly’s campaign in August (complete with a giant check prop); Chomsky, a professor at the Massachusetts Institute of Technology, is another critic of U.S. campaign finance rules.

“Proud to stand with Mike on his quest to stand for something important. Too often we let the impossibility of the fight against corruption generally stop us from acting locally. But here’s a place we could do some good. Please help as you can — if you’re in the district, most importantly by voting, but elsewhere, simply by spreading the message,” said Lessig on Connolly’s campaign blog, identifying him as “a candidate who is making money the issue” and calling it “a great and important campaign.”

“Thank you, Mike, for taking this burden on,” Lessig wrote.

The campaign announced the Lessig endorsement Monday, along with a reminder that Cambridge city councillor Craig Kelley backs the Connolly campaign.

“I’ve always fought for the people who build this country, for the teachers who educate our children and for the public servants who keep us safe … I view these groups’ endorsements as part of my report card,” Toomey said in the release. “If the voters choose me to represent them Nov. 6, I promise to work as tirelessly as I always have on behalf of the hard-working men and women who make our communities great.”

The groups endorsing Toomey for re-election include a Cambridge firefighters local, nurses association, two carpenters locals, the Massachusetts Teachers Association, two locals of the Service Employees International Union and others. A more complete list of endorsements is here.

The 26th Middlesex District includes parts of Cambridge and Somerville. Connolly and Toomey are Cambridge residents, while Republican candidate Thomas Vasconcelos was born in Cambridge but lives in Somerville.

Vasconcelos’ campaign has been quiet since mid-October, but all candidates are expected at the night’s 90-minute debate, taking place at 7 p.m. at Cambridge Community Television, 438 Massachusetts Ave., Central Square, and broadcast live on CCTV, which is Channel 8 in Cambridge.

The format is to be the same as at the Oct. 17 debate at Somerville Community Access Television in Union Square, and the Somerville channel’s Joe Lynch, host of the “Greater Somerville” show, will be moderating again.