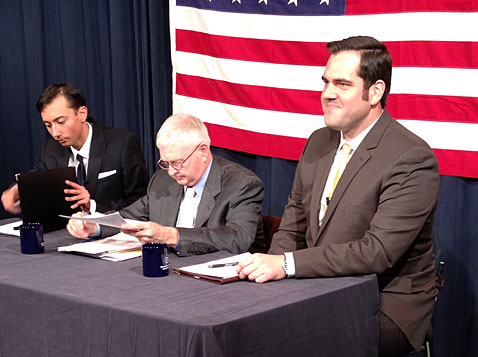 Things got lively toward the end of Tuesday’s three-way debates for state representative in the 26th Middlesex District, when candidates were allowed to ask each other questions.

Tim Toomey, the Democratic incumbent and Cambridge city councillor, asked independent candidate Mike “No Money” Connolly how he could morally justify working for a multinational company with ties to Halliburton and government spying after writing in college that you “can’t check your values at the door”; Toomey took hits from Republican Thomas Michael Vasconcelos, of Somerville, for being a hypocritical, anti-reform, part-of-the-problem politician whose guess about the size of the state deficit was off by a factor of 50; and Vasconcelos did himself no favors with a series of loud, impassioned rants that had him repeatedly apologizing to the audience for getting “all riled up here.”

“I’m very passionate,” said Vasconcelos at what was not even the midway point of his interrupting diatribes, “and I just can’t take this anymore from these politicians. My goodness.”

Vasconcelos dominated the third portion of the hour-and-a-half debate at Somerville Community Access Television in Union Square, which began with brief introductory statements and included a segment in which residents of Cambridge and Somerville, portions of which make up the district, asked the candidates whether they supported a gas tax or charter schools; how they would ensure the success of various developments coming to East Somerville; what they would do about air quality by Interstate 93; how important they considered service to individual constituents; and, in a final question from “Greater Somerville” show host and debate moderator Joe Lynch, how they would quickly explain their differences from their opponents on the Nov. 6 ballot:

Connolly reminded voters he is taking no financial donations and spending little money on his campaign, giving him credibility in reforming a broken two-party political system.

Toomey pointed out he has two decades’ of experience in navigating state politics and was the only Democrat in a race where “to deliver to the district” it’s important to be in the party dominating Beacon Hill.

Vasconcelos said he was the only candidate who recognized utter fiscal disaster loomed in the next few years for Massachusetts and had a comprehensive plan to escape it.

Vasconcelos stressed that he was more a libertarian than Republican and had plenty of criticisms for both parties — if not more for his own — while Toomey warned the small audience in the television station studio (and those watching at home or online) that if Republican Mitt Romney were elected president it would be vital to have a strong Democratic majority in place in Massachusetts. Vasconcelos, 25, said he was running in part because of the difficulty he was having finding a job after graduation from college, despite his focus on business, finance and accounting, while Connolly, 32, also noted the terrible job market and crushing debt that faced students upon graduation. Toomey, 59, was in a much different situation but agreed these were difficult times for many.

That did not, however, let Connolly off the hook with Toomey for taking a job at Autonomy, a software company owned by Hewlett-Packard that — Toomey noted, citing an article from The Guardian — has worked for British Petroleum, Royal Dutch Shell and Halliburton and provided eavesdropping and e-mail-monitoring products to governments around the world. “You chose to work for this company … That would not be a company I could ever work for,” Toomey said.

Connolly had answers, starting with Hewlett-Packard’s work force including 300,000 people around the world and his project being simply a database manager for lawyers that allows them to search quickly through large amounts of text such as e-mail. He also explained his financial straits, namely coming from a poor family and having to take on debt to get a college degree and employment that would then pay back that debt, to which Toomey replied that he would “rather go hungry than work for a company like that that could be detrimental to the constituents of Somerville and Cambridge by taking away their personal liberties and listening to their conversations. There are other avenues you should look at.”

Perhaps Connolly’s most powerful response on the issue was that while studying law he learned about the emotional, off-topic attack, and that by Toomey “raising what I do to help afford an apartment in Cambridge and what I do to raise money for my wedding, I would call that an ad hominem attack … a distraction. And I ask voters to think: What is it when a state representative and city councillor with 20 years’ experience chooses that his first question in a debate would be about what I do to earn a living?”

Vasconcelos scored here as well, calling Toomey a hypocrite: “This whole spiel, ‘How dare you work for this company,’ when our government does far worse,” he said to Toomey. “You yourself are part of a system, this bureaucratic machine that hurts so many people around the world and your own citizens.”

That began something of a roll for the young Republican, which included having Toomey and Connolly guess the dollar amount of the Massachusetts deficit. He stunned the crowd by saying it was, all told, about $100 billion, when his opponents had guessed about $2 billion, and that at $16,000 per person Massachusetts was consistently among the top three states of debt per capita. “A lot of it is good debt, but how are we to have either of these two tackle it when they have no idea how much debt we have, and they want to spend even more,” he said, reminding the audience — as he did several times over the 90 minutes — that he studied debt and finance. “The math is not adding up. This is not good.”

He also blasted Toomey for voting against reforming what could be bought with Electronic Benefit Transfer cards used by the poor, when other Democrats voted for reform (“It shows my independent streak,” Toomey said; “It shows your inability to reform government,” Vasconcelos replied) and got in a zinger when Toomey reminded watchers that his tax returns showed he paid more than he owed and donated to charity: “That’s wonderful, but we’re not voting for the next Mother Teresa.” Another good line came when Connolly reminded everyone of his “No Money” pledge, only for Vasconcelos to show he’d done his homework there as well.

“You have spent more money this campaign than I have. I should start calling myself Tom ‘Even Less Money Than Mike Connolly’ Vasconcelos,” he said to laughter from the audience before showing he’d spent about $400 less than Connolly’s $1,800.

For as many good lines and facts as he had at his command, though, many in the audience grew uncomfortable with Vasconcelos’ repetitive points, occasional self-contradictions (he said Toomey had “voted for some reform” despite his “inability to reform”) and loose interpretations of facts (on legislators voting themselves pay raises), interruptions, dominance of debate time that resulted in Connolly’s final answer being literally cut off midsentence as the clock ran out and seeming boasts (“We need more adults,” he said, referring to himself. “I know I’m young, but believe me, I have a lot more common sense than a lot of these people at the State House”).

Connolly came off well, remaining calm in the face of attack, allowing Vasconcelos to declaim on his time and also getting a chance to show off a wonky knowledge of and concern for Somerville despite Toomey’s charge that the signatures getting him on the November ballot were all from Cantabrigians. When a resident asked about buying a home amid the bad air quality by the interstate, Connolly not only called the area near the Mystic River beautiful; he cited a statistic that there was more heart disease and lung cancer deaths in Somerville (adjusted for age) than anywhere else in Massachusetts; noted his involvement in a relevant Somerville citizens group; and offered solid advice in suggesting residents get certain filters for their homes.

Toomey scored points even when he wasn’t talking, as his opponents paid him homage in many of their responses — with Connolly admitting, for instance, that while some constituents didn’t know the name of their state representative, many others thought of Toomey as “an incredible public servant who works really hard on constituent services” and Vasconcelos agreeing that to many Toomey was like a member of the family.

Lynch, a veteran of moderating nine debates in the past four years, said afterward that all three candidates seemed well prepared but might have benefited from setting time limits on responses in the final part of the debate. “Debate is healthy … you have to have spirited debate. But you have to have guidelines, and one candidate cannot monopolize the time,” he said.

He was purposely more of a stickler in ensuring each residents’ question was answered, he said, but would have set time limits in the final portion.

“They came up with it, not me,” he said of the candidates’ debate format.

The same format has been announced for the candidates Oct. 30 event in Cambridge. A location and moderator hasn’t been pinned down, the campaigns said.