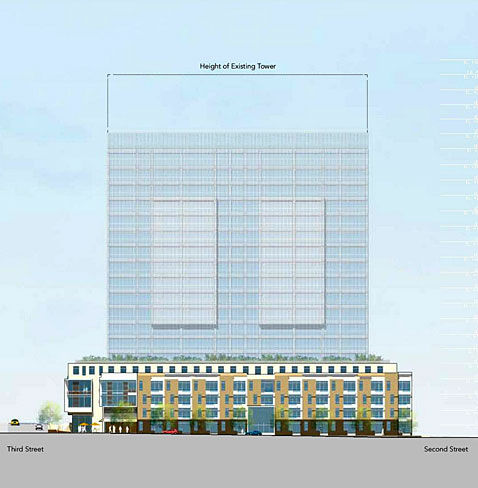 A push to reverse the state’s decision for who gets to redevelop the defunct Edward J. Sullivan Courthouse has had some result, East Cambridge Planning Team President Barbara Broussard said Saturday: The winning developer has agreed to appear before the neighborhood group Jan. 23, with state officials considering a Feb. 13 appearance.

A letter appealing directly to state Division of Capital Asset Management Commissioner Carole Cornelison and copied to other city and state politicians, including Gov. Deval Patrick, may have done the trick.

Leggat McCall Properties was chosen Dec. 14 with a plan for 500,000 square feet of office space using all of the tower and half the base, with the rest being retail and amenity space. The builder plans a park, health club and small grocery store, as well as 50 to 100 parking spaces, but its Jan. 23 appearance will be the first time neighbors to the courthouse will see details of that proposal, Broussard said. Even as several other prominent developers showed renderings and made comprehensive presentations, Leggat McCall decided to talk fully only with state officials.

HYM Investment Group, on the other hand, provided documentation and detail on its plans to shear the top four floors off the much-loathed, long-protested 22-story, three-basement, asbestos-ridden tower. Those floors are now Middlesex Jail space.

An Aug. 22 poll by the planning team showed HYM the favorite with about 78 percent of the vote. DivcoWest, which proposed about 400,000 square feet of office space, with the remainder split between retail, community space and amenities, “received 11 No. 1 votes,” wrote East Cambridge Planning Team leaders to Cornelison, “and Leggat McCall came in third, with only a handful of votes.”

The company’s proposal wasn’t “thoughtful or professional,” they said.

“We formally request that DCAM re-open the selection process and take our views into consideration,” wrote Seth Teller and team president Barbara Broussard, saying it was “unacceptable” Cornelison and DCAM had ignored two previous letters on the topic.

The agency also ignored requests to come to the team’s most recent meeting, according to its Facebook page.

“DCAM, despite multiple invitations and follow-up emails, has not yet responded to ECPT’s request to attend Wednesday’s meeting and discuss the awarding of the courthouse redevelopment,” a status update said. “Yes, DCAM said neighborhood involvement was important and that they considered us an important stakeholder in the process, however, their actions speak loudly to the contrary and we are disappointed with the process and their lack of a response of any kind to our invitations to attend.”

That changed last week, Broussard said, and Cornelison and Leggat McCall promised an appearance and some answers Jan. 23.

State officials likely already knows the line of questioning they’ll face. Since community preference didn’t seem to play a large role in the choice – something signaled early on by state officials – the letter asks what criteria were used, how long ago a decision was made and why there’d been no reuse study beforehand.

The state heard the community and its concerns, Cornelison said last month, “but we also had to follow our process and the criteria set forth on the [request for proposals].”

She cited specifically Leggat McCall’s offered price for the site, which has not been revealed, its financial capacity to complete the redevelopment and the promise for employment offered by the mass of office space – 2,100 new, permanent jobs after an estimated 133 construction jobs per month from 2014 to 2018 once Middlesex Jail prisoners are moved to Billerica.

“The proposal appeared to be complementary to Kendall Square and the activity there,” Cornelison said. “Clearly the developer thinks there’s an opportunity to provide space to renters and leasers with businesses in that area. There’s a big win here for the community and the commonwealth. This is a property that has long been deteriorating and an eyesore, and it will now be returned to productive use and to the tax rolls.”

With the addition of the planning team’s letter to the City Council’s agenda for Monday, councillor Tim Toomey and others may take the opportunity to address the state’s decision. Toomey said last month that “it feels like we were ignored” and that the neighborhood’s enduring of the hulking building, the resulting parking issues and stress from jeering prisoners overheard since 1974 should have “earned us a greater say in how this property is redeveloped.”

In other development news, the end of construction was reported for Seven Cameron, the apartment complex replacing Rounder Records and Fort Apache recording studios in North Cambridge.

“Where alternative rock bands including Radiohead, the Pixies and the Mighty Mighty Bosstones recorded their music” is now 37 one- and two-bedroom units going for $2,400 to $3,300 – and already 86 percent rented, wrote Thomas Grillo in the Boston Business Journal. Oaktree Development paid $3 million in 2010 and another $11 million on construction and environmental cleanup.

Rounder moved to Burlington in 2007.

The Boston Globe’s Scott Kirsner is also wondering why the Apple logo has gone up over the door to a four- or five-person office in the Cambridge Innovation Center. Although Apple had offices in Cambridge briefly after acquiring a local company in 1989, Kirsner reported in an update from a one-time employee, almost all Apple engineering is done at the company’s Cupertino campus.

A commenter conjectured the office could be only an offsite office for the nearby Cambridgeside mall Apple Retail Store.

This story was updated Jan. 15, 2013, to show state officials won’t be attending a Jan. 23 meeting of the East Cambridge Planning Team.