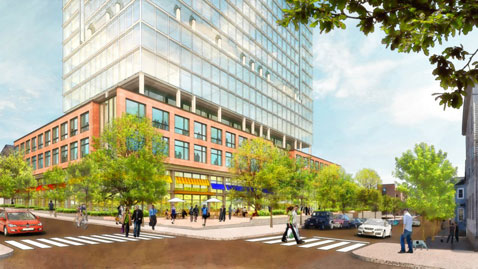 Leggat McCall‘s plan for 500,000 square feet of office space has been chosen for the defunct courthouse in East Cambridge.

Leggat McCall Properties has been chosen to redevelop the Edward J. Sullivan Courthouse in East Cambridge, according to the office of state Division of Capital Management Commissioner Carole Cornelison.

The announcement came at about 1 p.m. Friday.

HYM Investment Group had been among the three finalists with a plan to shear the top four floors off the 22-story, three-basement, asbestos-ridden tower, but the division went instead with a plan for 500,000 square feet of office space using all of the tower and half the base, with the rest of the base being retail and amenity space. Space in Leggat McCall plans is reserved on the south side for a park, and a health club and grocery store (but not a supermarket) are being considered, company officials said in August. There will be 50 to 100 parking spaces.

The final builder option was DivcoWest, which proposed about 400,000 square feet of office space, with the remainder split between retail, community space and amenities.

But the state chose Leggat McCall.

“I haven’t had a single positive response. People are very disappointed,” said Barbara Broussard, president of the East Cambridge Planning Team. “People would have taken DivCo or HYM. They didn’t want commercial development with [few] amenities.”

East Cambridge city councillor and state Rep. Tim Toomey also said he was disappointed. “DCAM heard from the community about how other developers’ proposals were clearly better for East Cambridge, but it feels like we were ignored,” he said. “The neighborhood has dealt with the aggravation of being the location for Middlesex County’s jail and courthouse for generations, and that should have earned us a greater say in how this property is redeveloped.”

Factors in the decision

HYM’s option was preferred overwhelmingly by East Cambridge residents, Broussard has said. She told Cornelison in August that 78 percent of team members liked the company’s proposal for a lower building with mixed uses that included housing. “The East Cambridge neighborhood has suffered with a poorly conceived and constructed courthouse for more than four decades,” Broussard said, urging the state “to select the developer for this project with more than financial considerations in mind.”

The state heard the community and its concerns, Cornelison said Friday, “but we also had to follow our process and the criteria set forth on the [request for proposals].”

The decision was based on such factors as the strength of the Leggat McCall team, led by company president Eric Sheffels, its financial capacity to complete the redevelopment and the purchase price, which was higher than the other bidders’, Cornelison said. The price would be revealed in a couple of months when the sale is finalized.

The state is “studying options” to get the property emptied of its final use — the Middlesex Jail taking up the top four floors — by the end of 2013, allowing the developer to begin a four-year construction process beginning with the remediation of asbestos, Cornelison said. Another factor in choosing Leggat McCall was that construction would bring 133 jobs per month, and that the building’s office and retail space would ultimately be filled with 2,100 new, permanent jobs.

“The proposal appeared to be complementary to Kendall Square and the activity there,” Cornelison said. “Clearly the developer thinks there’s an opportunity to provide space to renters and leasers with businesses in that area.”

“There’s a big win here for the community and the commonwealth,” she said. “This is a property that has long been deteriorating and an eyesore, and it will now be returned to productive use and to the tax rolls.”

The state had warned as far back as November when the process started that the city would have little input on the selection of a developer, although whatever company was chosen would have to go through Cambridge’s public process afterward.

The public bidding process began only after the state offered to sell the space to other state agencies and to Cambridge itself, but all passed on the opportunity.

The worry at first was that East Cambridge might get socked with high-density housing. Up to 259 units were possible on the site, said Brian Murphy, assistant city manager for community development.

The courthouse finished construction in 1974 and held a jail, District Attorney’s Office and Middlesex Superior and Cambridge District court. With those functions moved, the 595,000 square feet of space on 1.37 acres, zoned to take everything from homes to office space, retail or even a hotel, was announced in November as being for sale. Eight developers filed bids for the site in February, and a second round in June attracted seven developers; in August it became three; and Harrell said a recommendation for the winner was made in mid- to late October.

Leggat McCall has worked in Cambridge before, having converted the Durans chocolate factory, built in 1898, into the 196-unit luxury condominium building known as One First Street. The building opened in 2008. The company made the least public effort of the three finalists during the selection process, and did not return a call for comment Friday after its selection was announced.