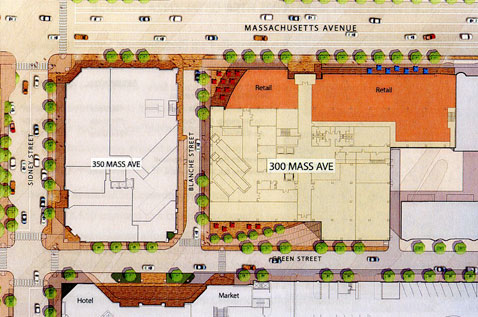 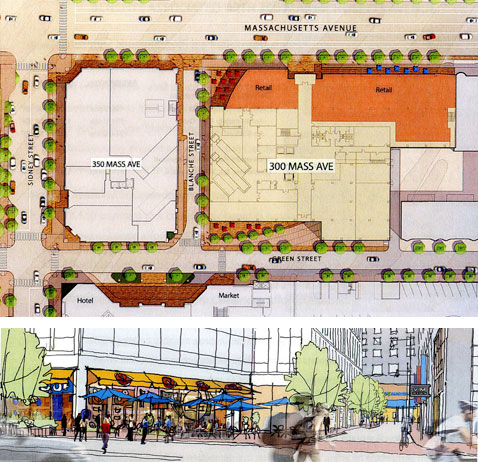 Forest City has carved out open space on at Massachusetts Avenue and Blanche Street, probably for open-air dining, company officials said Thursday, showing it from overheard and in a rendering of a proposed use.

Developer Forest City’s plan for a giant lab and office building was back Thursday with some people-pleasing tweaks: a promise to build 25 units of affordable housing, which is five more than previously; to seek out and charge low rents to small, local, owner-operated stores and eateries for the 15,000 square feet of retail on the building’s ground floor; a commitment to gold-level compliance with LEED environmental buildings standards, an advance from silver; and knocking out one corner of the building for what is likely to be open-air dining.

The sweetener of building 25 units within seven years is new since Tuesday, when Forest City gave a presentation to the Planning Board. The company was then pitching 20 units within four years.

The changes weren’t pleasing enough, though. Roughly the last hour of a more than three-hour City Council Ordinance Committee meeting was taken up with cautious, skeptical or downright hostile public comment – part of a two-hour public comment period that skewed 63 percent negative.

The proposal is to change local zoning to allow a 246,716-square-foot building at 300 Massachusetts Ave. for the Millennium biotech company, designed to be 95 feet tall at its highest point. (A “penthouse” of mechanicals such as heating and air conditioning doesn’t count against allowed height but would add some 30 feet to its peak.) Current zoning for that area near Central Square allows 80 feet (again without counting mechanicals).

City councillors also had their doubts about the plan, with most resistance centering around those units of affordable housing.

The plan – presented mainly by Peter Calkins, executive vice president and chief operating officer for Forest City – was largely the same as how it ended in August, and that became a problem: While promising an additional five units of affordable housing, councillors noted, the amount the company would pay for failing to keep that promise didn’t go up proportionately. As councillor Ken Reeves first noted, it was $4 million going into the Affordable Housing Trust for a default on 20 promised units, and it’s the same for 25.

“I would certainly want the 25 units, but if we don’t get the 25 units, I want what the formula would have given us in payment,” Denise Simmons said. “I want the equivalent by formula.”

David Maher looked at the estimated per-unit cost of $200,000 and upped the estimate to about $5 million – and even that would need to be supplemented by tax credits, bank loans and other funding, according to officials from the Community Development Department. Leland Cheung noted that the payment would come only after seven years, when $4 million or $5 million would be worth less than when the commitment is signed.

“I [also] would hope to never see that $4 million,” Cheung said, asking it it was possible “for the petitioner to make building the housing seem more obviously in their benefit. I’d rather it be in their financial interest to create the housing, not to give us the funds.”

Councillors Craig Kelly and Minka vanBeuzekom had another point of resistance: Suggesting that Forest City could pay the city a promised $1.08 million in community benefits immediately upon approval of the zoning rather than in four incremental steps triggered by the granting of the zoning, special permit, building permit and certificate of occupancy. “We give them something, they use it, they don’t use it, that’s their issue. We should not, I don’t think, have to wait for them to do stuff to access the payments,” Kelley said of payments modeled after a recent agreement with Novartis.

“Why can’t we get the money up front?” vanBeuzekom said. “There will be things perhaps outside our control in terms of the timing of the building, but we’ve given away the right and we can’t get it back.”

Kelley continued to push on issues such as how far from the zoning area Forest City might build its 25 units and why the 168 units of affordable housing it promised to spare within its University Park for 75 years (the length of the company’s ground lease) couldn’t instead be granted forever by the land’s owner, the Massachusetts Institute of Technology. Meanwhile, vanBeuzekom had requests that predicted what some residents would ask in the public comment period ending the night: that the company add the mechanicals to its drawings, since “just because it’s a penthouse of mechanicals doesn’t mean you don’t feel that extra 30 feet from the street”; and that it do studies of traffic, transit and parking for after a Millennium building went in. (Resident Steve Kaiser, a traffic engineer, submitted his own study to the council and hoped there be others to challenge it.)

While Calkins assured there would be enough parking in a Franklin Street garage when Vertex workers move to Boston and other spaces are reallocated, vanBeuzekom noted that there would still be a significant gain in people and perhaps cars when new businesses moved into the buildings Vertex and Millennium were relocating from.

All agreed the retail could be a win for the area, giving life to a city block referred to more than once Thursday as “desolate.”

Nearly the entire frontage for the building at ground level would be retail, including one, 10,000-square-foot section that could be broken up into four or five businesses. A small gap between retail sections would lead people to Millennium, a sacrifice of the typical “trophy lobby” that retail expert Jesse Baerkahn said was a significant gesture on the company’s part.

“It’s exciting to have a long strip along the street … it sets up a situation where we can be far more creative and dynamic in how we devise the space. That is crucial today, as we’re seeing far, far less large retailers and more folks that have a hyper-focused concept. They may require only 1,000 square feet where five years ago they would need 5,000,” said Baerkahn, who was charged with finding Millennium tenants after his success in Kendall Square, which he transformed from a silent business district with upscale restaurants, bakeries and coffee shops, services and stores. There were two steps to finding the right tenants, he said, starting with “making a true commitment to marketing and hustling and finding those folks. That’s not easy. The second is also not easy … it’s making a commitment to structure deals and offer economics that are conducive to allowing small businesses to occupy the space.”

After the meeting, Baerkahn expanded on the difficulty of finding the right retailers, considering that “local is often more expensive … but I think it’s certainly achievable.” He named Clover Food Lab, which began selling its sandwiches and snacks out of a truck and has expanded to multiple storefront locations – yet still sells nothing over $7.

Residents and councillors suggested they were extremely serious about the affordable aspect of those potential shops and eateries. Resident Nancy Seymour coined the term “exclusionary retail” to describe the sort of high-end, tech worker-oriented wares residents wanted to discourage in favor of shops that could be used by long-term residents of the area, many of whom have low or moderate incomes. Lee Farris said that if residents had to choose between locally owned and affordable, the latter was better.

According to the Community Development Department, the city has a master plan, a set of documents that “taken together, reflect the evolution of the city over the last three centuries and provide a planning framework into which new projects must be inserted with care and with attention to many trade-offs.” But the several resident e-mails seen in a packet available Thursday make it clear this either isn’t generally known or that the set of documents, completed anywhere from 1987 to last year on a piecemeal basis, isn’t accepted as comprehensive or cohesive.

Speakers mentioned the need for a master plan too. Mike Connolly – an independent candidate for state representative in November – said he saw a need for “a plan driven by the people” rather than developers such as Forest City.

Kristen von Hoffman, a sustainability expert with the school district, noted, as Kaiser did, that Forest City’s zoning request was just one of four overlapping upzonings requested for Central and Kendall squares, and that the city had some 12 million square feet and 5,000 units of housing in development. As a Yale undergraduate 11 years ago, she said, she conducted urban planning research on revitalizing New Haven, finding that a master plan with “mixed-income affordable housing as well as an integrated economic approach were key to New Haven’s success.”

The members of the Ordinance Committee that remained after three hours – Cheung, Maher and vanBeuzekom – voted to let the Forest City zoning petition go to the full council without an up or down recommendation and to bring the matter back to a 4:30 p.m. Jan. 30 committee meeting, again at City Hall.