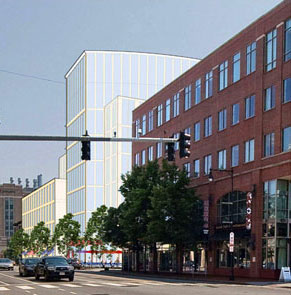 The bid to build a giant office and laboratory building near Central Square for Millennium Pharmaceuticals returned to the City Council on Monday, essentially the same as when councillors declined to vote on it over the summer.

The proposal again would keep 168 apartments built by developer Forest City for low- or moderate-income residents and add 20.

“Several councillors and affordable-housing advocates suggested more time was needed to assess what we were proposing,” said Peter Calkins, executive vice president and chief operating officer for developer Forest City’s local office. “Since August, we have met many affordable-housing advocates in a variety of settings, including the council’s own housing subcommittee … we received a very favorable response.”

The proposal was toxic in August, before the City Council let it expire instead of voting on it, but the 21-member Central Square Advisory Committee has since settled on suggestions presented Tuesday to the Planning Board, a signal to Forest City. The company sent its renewed proposal to the city the next day.

An eventual yes vote from the council would stretch “Cambridgeport Revitalization Development District” zoning, which the developer won for its University Park in 1988, to Massachusetts Avenue instead of stopping it at Green Street. That would let Forest City build as high as 95 feet instead of the current zoning’s allowed 80 and result in a structure with 230,000 square feet space of lab and office space for Millennium Pharmaceuticals and 15,000 square feet of ground-floor retail.

The city has preserved 275 apartments in recent months, but another 820 are set to expire in roughly the next seven years, according to a report from the council’s Housing Committee.

Forest City’s 168 affordable units expire later, ranging from 2021 to 2036 depending on when construction started and ground leases were signed, company officials explained Monday. But government subsidies already in place stretch those expirations to between 2029 and 2059, and the company had agreed to look for even more subsidies that would keep the units as affordable until between 2064 and 2078.

A Forest City “letter of commitment” repeated its promise to preserve the 168 affordable apartments for the maximum 75 years for each even if there were no subsidies.

That would cost the developer “millions,” according to the Housing Committee report, “but Forest City is willing to make the commitment.”

“With housing being the biggest concern … we thought it was important to do our part to help,” Forest City Boston President Frank Wuest said Wednesday. The developer also repeated a pledge of more than $1 million in “community benefits” payments to the city.

What ended Forest City’s bid in August was in large part resident anger over housing issues. A residential tower with a ground-floor restaurant that would have taken away most of a park was taken out of the plan in July; residents later became upset when they learned the University Park affordable-housing units were due to go market-rate.

The company offered a deal to keep them as affordable and said it would build another 20 units of affordable housing within a half-mile of its zoning within seven years, a figure based on how much affordable housing would have been built as part of the proposed apartment tower. If the 20 units aren’t built, Forest City was to pay $4 million into the city’s Affordable Housing Trust so more units can be built without the company’s involvement.

“We were strongly encouraged by city officials and residents concerned about the future of the Central Square area to refile our petition,” Wuest said. “This expression, combined with the conclusion of the Central Square Advisory Committee’s recent intense work, led us to conclude the right thing to do was to move forward with the 300 Massachusetts Ave. project.”

Resident James Williamson said during public comment that he’d spoken with affordable-housing tenants disagreeing with Forest City executives’ description of their public outreach and its results, but he presented no specifics.

The 168 total includes 77 apartments at Forest City’s own Kennedy Biscuit Lofts and 100 Landsdowne buildings, all for low-income residents; and 91 (including the 22 for moderate-income residents) at Auburn Court, which is inside University Park but controlled by Homeowner’s Rehab Inc. and managed by Winn Residential, according to Chris Cotter, housing director of the city’s Community Development Department. Homeowners Rehab is a group founded by residents in 1972 that now owns more than 1,100 apartments and 40,000 square feet of commercial space in Cambridge.

“Millennium’s goal is to maintain a single campus in Cambridge that can support our ongoing growth,” Millennium’s Mark Hernon said in a press release. “The 300 Massachusetts Ave. location provides the opportunity to achieve that objective.”