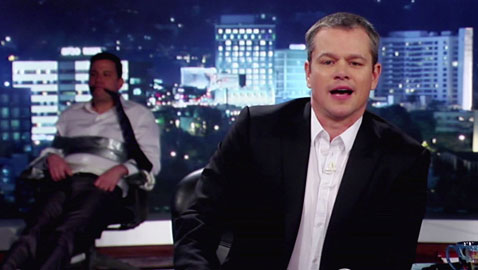 Ben Affleck: J.J. Abrams, who revived “Star Trek” in 2009, will direct “Star Wars: Episode VII” for a 2015 release, according to The Wrap in a Thursday report saying also that Affleck had been in the running. Comicbook.com reminded us that Affleck had downplayed his hopes in November, telling MTV “I’m glad I don’t have that job. It’s a tough thing, it’s a tough decision to make. Now, that’s the one where whoever it is, I guarantee you by the time the movie gets made I’m going to be that dad calling in favors, where it’s like ‘Hey, it’s Ben, can me and my kid come to the premiere, swing by, by any chance?’ … J.J. would kill it. I mean J.J. would crush it. J.J. is spectacular, but he would be great at anything.”

Now, since Abrams had once rejected the idea of directing “Star Wars” but now will be, the site points out that this means Affleck should still be considered in the running to direct “Justice League.”

Meanwhile, the Producers Guild of America’s PGA Awards 2013 winners will be announced today, and “Argo” is in the running, Alt Film Guide says. Already this weekend Affleck was named Modern Master at the Santa Barbara International Film Festival. And who handed him the statuette Friday? Matt Damon, The Hollywood Reporter notes.

Casey Affleck: Reviews of “Ain’t Them Bodies Saints” are coming in from the Sundance film festival, with critics saying the movie plays like an impressive, worthy (albeit slowly paced) sequel to Terrence Malick’s 1973 film “Badlands.” Hitfix has a representative review that credits the “puppyish glint of hope in Affleck’s hard, milky gaze” and says the audience roots for his character’s “heart not to break while knowing full well it will.”

Lenny Clarke: The comic, actor and sports commentator has a three-day stand coming up at Comix At Foxwoods in March, with the fourth and final show billed as the “Nasty Show.” The Connecticut Broadway World says it’ll be “one not for the faint of heart or easily offended … Lines will be crossed and common decency will be left at the door during this final uproarious performance.” Tickets for the 21-plus shows are $25 and $50 in advance or $35 and $60 the day of the show. But wait! There’s more. Because in addition to that money, people who go also have to meet the – blerg! – two-drink minimum. The shows are March 28 and March 29 at 8 p.m.; and March 30 at 8 p.m. and 10:30 p.m.

Matt Damon: Locally, the big Matt Damon news is that the Office for the Arts at Harvard says the screenwriter and actor will be getting its Harvard Arts Medal on April 25 at Sanders Theatre, launching the three-day Arts First festival of university creativity.

Nationally there are other Damon concerns. Like, that although he said in November “I was way too old 10 years ago to play” Lance Armstrong – making one think the rumors of him taking on a biopic of the shamed bicyclist would be over with – the rumors persist. But there was little ink spent on the rumor, digital or otherwise, because of all the “Jimmy Kimmel Show” madness.

In case you missed it, Damon took revenge this past week for Kimmel bumping him 1,205 times from the show:

And Kimmel retaliating that he was “F*@#ing Ben Affleck”:

So now, in what we’ve been assured is a publicity stunt and not a sign of the Hollywood star’s inevitable derangement, Damon “kidnapped” the talk show host:

And had a good, star-studded show Thursday (renamed “Jimmy Kimmel Sucks”) that beat Jay Leno and David Letterman for the night for ratings, according to The Washington Post. Damon brought on Amy Adams, Ben Affleck, Sheryl Crow, Andy Garcia, Nicole Kidman, Jennifer Lopez, Demi Moore, Gary Oldman, Robin Williams, Reese Witherspoon and, wow, Silverman. The Hollywood Reporter said the show got a 2.92 rating in Nielsen’s Metered Market ratings, a record for it, and will get an encore airing Tuesday at 10 p.m.

With numbers like that, this isn’t going to end anytime soon. “I have escaped and there will be retaliation, I promise you,” Kimmel told Access Hollywood on Friday.

Passion Pit: The remix of the electropop band’s “Carried Away” by Tiësto is pretty cool. The Daily Beast called it one of the best music videos of the week. (Slight praise, when you think of it, but that doesn’t mean it’s not a good remix and cool video.)