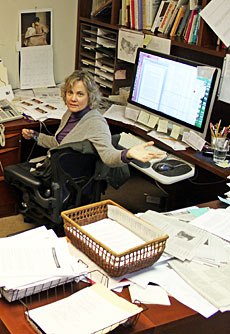 An atheist group wants the school district to take back its recognition of the Muslim holidays of Eid, saying closing school for Eid one day a year violates the Establishment Clause of the U.S. Constitution.

“We ask that you immediately adopt a new district calendar that adheres to these constitutional mandates” and instead switch to a policy of excused absences for Muslims who want to take a day off to observe the holiday, wrote Annie Laurie Gaylor, a co-president of the Madison, Wis.-based Freedom From Religion Foundation. The request was in a faxed April 5 letter, which was followed by a reminder June 28 and another Jan. 22 complaining no response had been received The foundation hoped to hear back “in writing indicating what action has been taken to resolve this issue and ensure it will not occur in the future.”

The April 5 letter was sent “on behalf of concerned Cambridge residents,” Gaylor said and also names Good Friday and Rosh Hashanah as violations of the clause.

As a result, the School Committee grappled Tuesday with whether to pay for outside counsel to help Maureen A. MacFarlane, legal counsel for Cambridge Public Schools, prepare for possible action from the foundation.

Members had issues with the request.

“I’m still a little lost on figuring out why we would need more legal counsel to deal with something like this,” committee member Richard Harding said. “This is similar to what I’ve seen before: some outside fringe group making a judgment call on something the committee did … I don’t see know where the level of this rises to the occasion that we would spend any particular time and why we should stretch you in your capacity to even address this.”

MacFarlane made clear she would still be working on the case, but “I am an office of one” and additional, specialized help could be useful.

She and Superintendent Jeffrey Young originally talked about a just-in-case authorization of $25,000, although MacFarlane suspected the costs of using the Boston office of Edwards Wildman would be less than $10,000 to $12,000. “I was trying to be anticipatory, to have it [in place] as opposed to having to ask for it midstream,” MacFarlane said, indicating that if the committee turned down the request she would be resolute in tackling the matter herself.

Committee member Patty Nolan said she didn’t want to approve the money because the foundation seemed “really just out to have us to spend money and are going after Cambridge for frivolous reasons.” Nolan said a look at the foundation’s website showed that the cases it won tended to be those where defendants had acted for solely religious reasons, while the district created a policy based on a significant number of Muslim missing school.

Facing resistance, Young and MacFarlane agreed before a vote to do all the initial responses to the foundation themselves. The committee agreed formally to allow them to respond to the complaint – suggesting as well that the city solicitor be included in the case – and, at the superintendent’s suggestion, moved their funding request to the calendar so it could be raised again quickly if the need arose.

“I really don’t want to give them any satisfaction in raising it to the level of thinking we need outside counsel,” Nolan said. “I think it’s responding to a bully. I do think they have a good purpose … but in this case the school district was very clear that there are secular reasons for us to be closed on several major holidays, which has to do with the attendance of students – very well documented by Ms. MacFarlane.”

If a letter were to be sent to the foundation, it should include the same data, Nolan said. The foundation’s letter suggests that schools have a “secular justification” for closing schools only if many students are affected by a holiday.

The committee considered the information about school absences before approving the holiday January 2010 – years after the original request for the policy by students at Cambridge Rindge & Latin School.

“I’m not willing to back off from a policy we approved unanimously,” McGovern said, who recalled that while leading the policy through the public process to a vote, “the feedback from Cambridge residents was overwhelmingly supportive. The people not in favor of this were from outside Cambridge. ”

“They’re writing on behalf of concerned Cambridge residents,” McGovern said. “I’m interested as to who these concerned residents are.”

At least one complaint

The Foundation, now 35 years old, says it has more than 17,500 members, making it the largest association of atheists, agnostics and skeptics in the country, and nearly 400 members in Massachusetts. Patrick Elliott, a staff attorney, said Wednesday that there are more than 20 members in Cambridge.

He said the foundation’s letter came about because there had been “at least one complaint about the holidays” from a Cambridge member, and not more than three. It was not possible to identify the person or people making the complaint, he said, but it was not unusual for a member to mention a possible violation of the constitutional separation of church and state and for the foundation to follow up on it independently.

While McGovern said he was disturbed that a complaint about school holidays was made only after a Muslim holiday was added to the list of those being recognized, Elliott assured that Islam “is not at all” the foundation’s concern. “This is not simply about Islam. The letter talks about the Good Friday holiday as well,” Elliott said.

The April 5 letter, which says “the intentions behind this action may be laudable,” cites a judge’s finding in the 1995 Illinois case Metzl v. Leininger in saying that “The First Amendment does not allow a state to make it easier for adherents of one faith to practice their religion than for adherents of another faith to practice their religion, unless there is a secular justification for the difference in treatment”  and refers to closing for Good Friday as wrong because there was “no evidence that the school could not afford to stay open on Good Friday due to lack of attendance … the court held that requiring schools to close on Good Friday had no secular purpose and therefore violated the Establishment Clause.”