Violence and comedy? Sweet’s ‘You Only Shoot the Ones You Love’ explains it 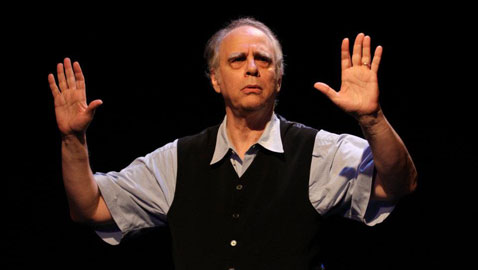 Violence and comedy? Sweet’s ‘You Only Shoot the Ones You Love’ explains it

Playwright and historian Jeffery Sweet performs “You Only Shoot the Ones You Love.” (Photo: Dixie Sheridan)

Jeffery Sweet literally wrote the book on improv comedy, but his gig Saturday in Central Square goes a different direction, looking into how history, violence, storytelling and comedy relate.

His one-man show “You Only Shoot the Ones You Love” interweaves the story of how Cossacks trying to kill his grandmother – and the grandparents of many others in the comedy world – and his encounters with such famed names as Mel Brooks, Del Close, Lenny Bruce, Mike Nichols and Elaine May. The result of the violence?

A vengeful explosion – of satire and comedy, he says.

“The show I’m doing is funny – the critics said it is, so it must be true, right? – but there aren’t many jokes. Mostly it’s storytelling,” Sweet told DigBoston’s Sara Burgess.

Some of those encounters with famous comedians have been used in his books about theater and comedy history, including “The Dramatist’s Toolkit” and “Solving Your Script” and his oral history of Chicago’s Second City comedy troupe and club, “Something Wonderful Right Away.”

But some were also vital to “You Only Shoot the Ones You Love.” The Cambridge-born writer, journalist, songwriter and theater historian brought the show to the New York Fringe, then brought it back for an extended engagement after it won critical acclaim. The New York Times’ Anita Gates called the show “compelling” as well as entertaining, aided by Sweet’s “amiable, laid-back style.”

Even before he hits the stage Saturday, though, Sweet’s presence will be felt in Central Square. He’s contributing an unfinished script to Improv Boston’s “Playbook” series Friday – he’s also written a Baker’s dozen of performed plays – and is teaching a course at the club early Saturday.

“Jeffrey Sweet is one of the most diversely talented, universally respected and inspirational artists working in theater today. We are thrilled for Mr. Sweet to share both his vast writing experience through ‘Playbook’ and his unique style of comedic performance in his impressive one-man show,” said Mike Descoteaux, the theater’s artistic director.

“You Only Shoot the Ones You Love” is at 9 p.m. Saturday in the Studio Theatre at ImprovBoston, 40 Prospect St., Central Square. Tickets cost $12, or $10 for students.