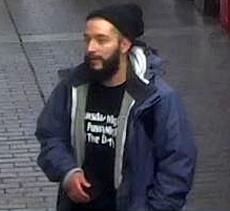 MBTA police released this image of a suspect in an April 10 double stabbing at the Downtown Crossing T stop.

A Cambridge man was arraigned Thursday on charges he attacked two people at the Downtown Crossing train station April 10, puncturing one victim’s lung by stabbing him.

Jose Murillo, 27, was arraigned in Boston Municipal Court on two charges of assault and battery with a dangerous weapon. At the request of Assistant District Attorney Erica Brody, Judge Annette Forde set bail at $25,000 and ordered Murillo to stay away from his victims.

According to prosecutors, officers from the Transit Police Department were called to Downtown Crossing at 10:15 p.m. April 10 and found the result of a confrontation between Murillo and two strangers.

He had been yelling and making obscene gestures at a group of passengers on a southbound red line train, including two men who got on at Park Street but left at the next stop to get away from him, prosecutors said. Murillo followed, though, exchanging words with them, then punching one and cutting him on the wrist. Murillo stabbed the second victim in the chest when he tried to intervene, prosecutors said. The stab wound punctured the man’s lung and liver.

Both men were taken to Massachusetts General Hospital and are expected to survive.

Transit Police released surveillance images of the man the following day and, with the help of a witness, named Murillo as a suspect.

“The break in this case came as a result of three things,” District Attorney Daniel F. Conley said. “First, high-quality surveillance cameras captured the suspect’s image. Second, a member of the community came forward to share identifying information based on that footage. And third, Transit Police detectives acted on the information to secure a warrant for the suspect’s arrest. This is an example of investigative resources in place, solid community involvement and good police work.”

Murillo returns to court May 21.

Update: The Cambridge Chronicle confirmed with police that Murillo turned himself in to police Wednesday.