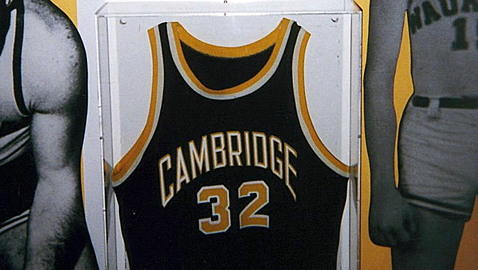 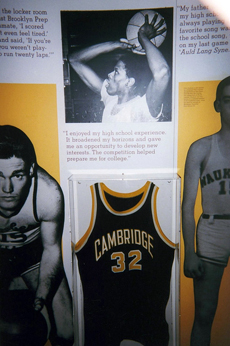 Patrick Ewing’s jersey from Cambridge Rindge & Latin is displayed at the Basketball Hall of Fame in Springfield. Ewing, Class of 1981, was inducted into the Cambridge Athletic Hall of Fame last year. (Photo: Wally Gobetz)

Cambridge Athletic Hall of Fame nominations must be in by May 15 for a Oct. 19 ceremony.

When the inductions are made, they’ll be only the second round for a revived program. “The hall of fame had been inactive for 31 years, and it was rejuvenated last fall,” said Kevin Crane, the former city councillor who serves as clerk for the program. “We had a wonderful event at St. John’s Church Hall where various inductees were [honored], and it was a spectacular reunion. It brought together a lot of different generations.”

In addition to acknowledging contributions and accomplishments within Cambridge sports, the program raises scholarship money and nurtures pride in Cambridge athletics, Crane told members of the School Committee at their meeting Tuesday.

This year’s induction ceremony will be Oct. 19 at Walker Memorial Hall at the Massachusetts Institute of Technology.

First, though, nominations are being taken through May 15 for coaches, contributors, teams and individual athletes to be honored. More information is here.