‘The Great Gatsby’: Fitzgerald classic remixed with lots of spectacle, but no soul 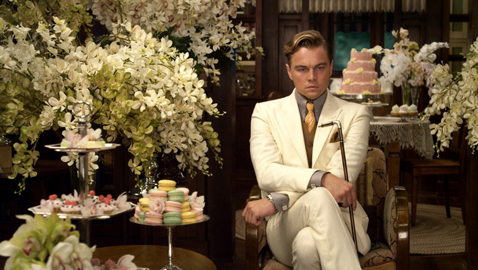 ‘The Great Gatsby’: Fitzgerald classic remixed with lots of spectacle, but no soul

F. Scott Fitzgerald never really made it in Hollywood (he was an uncredited revisionist on the script for “Gone with the Wind”) and Hollywood never got his seminal novel “The Great Gatsby” right in four attempts and a TV movie, or the latest go by gonzo stylist Baz Luhrmann. 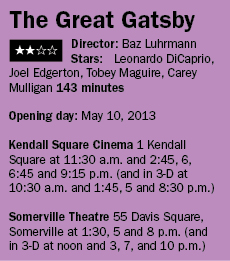 The book got middling reviews when it was published in 1925 and sold only 20,000 copies. Fitzgerald died in his forties unfulfilled and unrecognized, topics (fame, wealth, longing and loneliness) that are recurrent and at the fore of his works. Some of his works, such as “The Curious Case of Benjamin Button” and “The Last Tycoon,” his reflection of his feckless times in Hollywood, have translated well onto film, but not Gatsby, not yet.

It’s a spectacle enhanced or inflamed, depending on your stance, with a 3-D rendering. I never thought I’d see a novel of such internal reflection, limited physical action and high literary regard get the 3-D treatment, but leave it to Luhrmann, who jazzed up “Romeo + Juliet” and made the seedy side of turn-of-the-century Paris seem hip and romantic in “Moulin Rouge!”

After much camera sweeping of vast estate grounds and swirling through Gatsby’s writhing bacchanals, we resettle with Nick Carraway (Tobey Maguire), who narrates Fitzgerald’s novel and here recounts his time with Gatsby by unburdening himself to shrink at a sanatorium where he hopes to dry out and find solace. Luhrmann has him writing his recollections to his therapist, and at times Fitzgerald’s prose hangs oddly on the screen in silky wisps as Nick types. For anyone unfamiliar with the story who’s just sat through the first 30 minutes of Luhrmann’s bombast of roaring ’20s glitz and bam scored to semi-retro tunes by Jay-Z and Beyoncé, you may be in for a letdown when the weave of longing and a tangled triangle of love takes center.

The soirees of tawdry excess are put on by the titular Gatsby (played with great range – far more so than Robert Redford in the1974 version – by Leonardo DiCaprio) to garner the attendance of the Buchanans from across the bay. They’re old money and he’s nouveau riche, but Gatsby isn’t concerned about social classifications; he only desires the company of the lady of the house, Ms. Daisy Fay Buchanan (Carey Mulligan). That’s a problem, because she’s married. Nick happens to be Daisy’s cousin, and because of such relation (and the fact he just moved into the bungalow next door), the reserved Gatsby befriends Nick. Both men benefit from the friendship, and it’s an earnest one. Nick helps make arrangements to get Gatsby near the woman he knew and still longs for.

But matters are not so easy, Jay Gatsby is shy and afraid of failure and rejection, and then there is Tom Buchanan (Joel Edgerton, who does a decent job of being endearing and menacing despite a silly Snidely Whiplash mustache) who without a second thought drags Nick on midday jaunts into the city for copious consumption of top-shelf booze and trysts with lusty, bust-thrusting women.

Everything flows through Nick, and in that lies the film’s problem. The bug-eyed Maguire is miscast and his Nick is uninteresting and a wallflower. Daisy too is not that compelling or desirable. On the page, yes, but not here.

It’s a tough sell, people burning up mad gobs of cash to feed their egotistical desires and assuage their boredom — not an endearing portrait. The French do ennui better, and it’s more interesting when it’s done down in the dumps where one does not have a lifeline of a bottomless trust fund. Read some Raymond Carver and you’ll know what I mean.

What confounds Luhrmann and his crew is not period sets or score; it’s soul. “Gatsby” the book was about internal longing and the burn of unrequited dreams – having everything and yet nothing. The arcane mystery of how Gatsby came to be is an intriguing revelation and one that must have been the seeding for Don Draper. It drives the movie. So does DiCaprio, but his thoughtful and nuanced performance is practically incongruous amid Luhrmann’s aggrandized vision.

Leo’s the right man for the part, but Gatsby the story might just be one of those cherished classic tales that’s untellable on film.