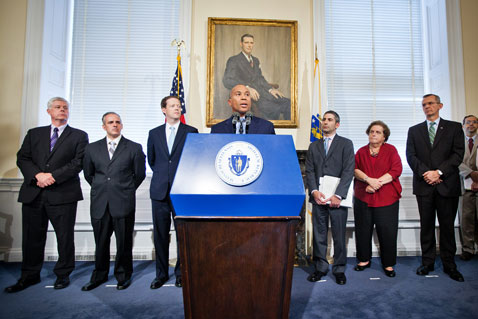 Gov. Deval Patrick speaks Friday at a press conference about his signing of the state’s Fiscal Year 2014 budget. (Photo: Office of Gov. Patrick)

A Waltham company’s promise to back off on shipping ethanol by train through Cambridge, Somerville and surrounding communities will be tested by Gov. Deval Patrick’s Friday veto of a bill that would have made the shipments impossible.

Global Partners, which ships ethanol by barge to its Revere terminal, would have been denied the license it needs to take shipment by rail instead through densely populated Eastern Massachusetts cities and towns – a change it has wanted for years. Residents celebrated July 1 when the bill went through for the governor’s signature and Global Partners backed away from the plan – with Edward Faneuil, the company’s executive vice president, general counsel and secretary, reportedly telling state Sen. Sal N. DiDomenico and others that it was a “good company that doesn’t want to go against the wishes of the local community.”

But Section 81 of House Bill No. 3538 was returned by Patrick on Friday, with the governor arguing it “would interfere with marine terminal operations and potentially impact existing licenses throughout the state” and get in the way of safe transport of ethanol and other hazardous materials.

Citizens active against the ethanol shipments met with Patrick early this week to urge him to sign the bill, but representatives of Global Partners were also said to be meeting with the governor’s staff, said Cambridge’s Alexandra Kepner, who has been vocal in the battle.

“Prospects are not looking good,” Kepner warned other residents in an online forum. “Global Partners has officially withdrawn their proposal for upgrading their Revere rail facility, [but] they are strongly lobbying the governor to veto the amendment.” She noted that her knowledge of the company’s meetings with Patrick’s staff was secondhand.

A message was left Friday with Global’s publicist, Scott Solomon, for comment.

Patrick’s proposed version would stop the issuing of “Chapter 91” licenses such as what Global Partners would need to prepare its terminal for rail shipment only until July 1, 2015, and licenses that have already been issued wouldn’t be affected.

He also called for the Massachusetts Emergency Management Agency to consult with other state agencies and “develop a comprehensive ethanol transport [disaster] response plan for all municipalities that accommodate the transport of ethanol by rail.”

There were four possible train paths for the proposed ethanol trains to deliver 187 million gallons of the gas additive every year. A total 191,992 people live within a half-mile of the four stretches of train tracks, and citizen groups among them were alarmed by the potential for disaster.

An ethanol fire can be fought only with a special and expensive chemical foam that cities must buy themselves. Ethanol is vulnerable to bursting into flame from a single spark at only 63 degrees Fahrenheit, said councillor Minka vanBeuzekom, who sat on a two-months study group after the rail plan was announced.

Not only do tracks pass within several feet of Cambridge homes – and some residents were panicked at the thought of what ethanol passing twice a week would do to their property values – but go right by Everett’s giant Liquefied Natural Gas storage facility; power substations at the Walden Street bridge in Cambridge and in Union Square in Somerville; through a short tunnel at a Massachusetts Institute of Technology building; and directly by the institute’s nuclear reactor.

“This has got to win terrible idea of the year. The idea you’re going to take almost a mile of highly flammable liquid and ram it through one of the most densely populated residential areas in the country is just a recipe for disaster,” councillor Leland Cheung said in June. “There’s not anybody in this room or watching at home who wouldn’t be in the evacuation zone if something were to happen.”

But vanBeuzekom saw merit in Patrick’s revisions, including the order to develop a comprehensive disaster plan and its allowance of some licenses. “It might even be better than the original, which would have prohibited all licenses,” she said.