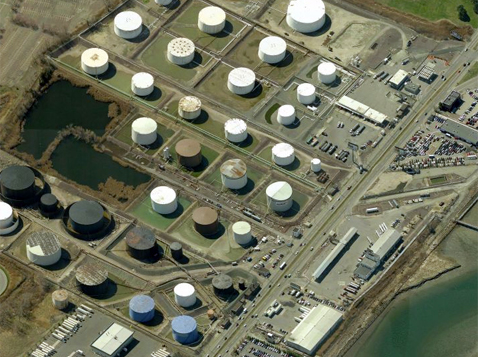 The Global Partners plant on the Chelsea River in Revere could take ethanol shipments by rail instead of barge. (Image: Bing)

The fight to keep trains hauling ethanol off tracks in Cambridge and surrounding cities goes on with informational meetings Tuesday and tonight, after city councillors grappled Monday with pessimism over whether there was a chance to succeed.

And that followed a reminder from resident Brad Bellows that the trains will pass within 50 feet of a nuclear reactor at the Massachusetts Institute of Technology where safety inspections until now had no reason to take an ethanol train derailment into account.

In part, councillors’ gloom was a response to letters from city Assistant Chief Gerard E. Mahoney and from U.S. Rep. Mike Capuano, neither of which expressed much hope in battling state indifference and federal embrace of shipment of hazardous waste by rail, even through a densely populated city such as Cambridge.

“My office approaches all issues honestly, even when I expect the response may not be what is hoped for. Therefore, I am compelled to inform the council it is my understanding that neither federal nor state law seems to provide ways to prevent ethanol from being transported through any community,” Capuano wrote. “As far as I know, no other city has passed legislation banning the transit of hazardous materials and had the ban stand up in court. Of course, if others can identify alternative paths to judicial success, I stand ready to support them.”

The town of Ayer tried to impose conditions on the use of local rail and was beaten in court, Mahoney letter says.

The city’s state delegation, including councillors Tim Toomey and Marjorie Decker, have been leading the fight – and the meetings.

On Monday the council also asked the city manager to put together a working group of up to 11 residents, city representatives, first responders and representatives of the business community to draft a community response to the plan. Maher said he wanted the group appointed “as soon as possible.”

The ethanol plan benefits Waltham-based Global Partners, which has been shipping by barge from Providence, R.I., but now wants to take the gas additive from the Midwest by rail through Western Massachusetts and ultimately a plant in Revere. There are four possible paths that would be taken by 60-car trains running twice a week at 30 miles per hour, delivering 187 million gallons every year likely through parts of Boston, Cambridge, Chelsea, Everett, Revere and Somerville. A total 191,992 people live within a half-mile of the four stretches of train tracks.

“This has got to win terrible idea of the year. The idea you’re going to take almost a mile of highly flammable liquid and ram it through one of the most densely populated residential areas in the country is just a recipe for disaster,” councillor Leland Cheung said. “There’s not anybody in this room or watching at home who wouldn’t be in the evacuation zone if something were to happen.”

An ethanol fire can be fought only with a special and expensive chemical foam, which cities must buy themselves. Ethanol is vulnerable to bursting into flame from a single spark at only 63 degrees Fahrenheit, said councillor Minka vanBeuzekom, who sat on a two-months study group after the rail plan was announced. But she also said there was a bit of good news: Local rail is in much better condition that at the scenes of the three recent derailments, although crossings still need upgrades to be able to accept ethanol shipments – another expense Global Partners doesn’t have to pay but that might be lessened by federal grants.

“They’ve decided to go a less expensive route. The reason it’s less expensive [for Global Partners to ship by rail] is that we’re bearing the cost of upgrading the system for them,” vanBeuzekom said.

State legislators have been debating forcing Global Partners to pay more of the costs of fighting an ethanol fire, as well as by blocking the rail plan entirely by keeping Global Partners from getting a license needed under Chapter 91 of The Massachusetts Public Waterfront Act to expand its waterfront Revere facility to take ethanol by rail.

Capuano’s letter doesn’t refer to the Chapter 91 approach, but says that he is generally “not optimistic that I can prevent this proposal from being implemented.”

“I found the letter from Congressman Capuano extremely alarming,” Cheung said, shaking off its pessimistic message.

It also alarmed James Williamson, a resident and co-president of the tenant council at Jefferson Park, a housing project with structures mere feet away from where rail where ethanol trains could pass. While asking to be put on the working group, Williamson also expressed concern that Capuano had a conflict of interest: a download he made from the Center for Responsive Politics database opensecrets.org suggested Global Partners was Capuano’s second-biggest campaign donor, and that company executives were faithful donators as well.

Toomey was quick to defend the congressman.

“He’s a man of great integrity. I have great respect for Congressman Capuano and he’s been showing great leadership on this issue,” he said. “It’s a very frustrating issue for a lot of us … the reality is that Washington is not working right now, so I don’t think this is going to be topping the agenda.”

Decker noted that the ethanol lobby, based in America’s Midwest heartland, is a powerful one, and that shipping of hazardous waste by rail goes on daily throughout the country.

“We’re a minority in the country that don’t want this,” she said.