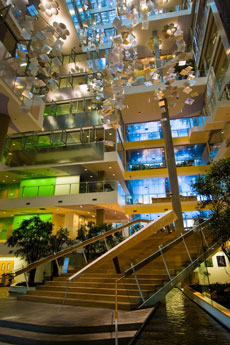 The writers of a zoning bill calling for strict environmental standards in large Cambridge construction said Wednesday they welcomed suggestions for improving the language, while a representative of the Chamber of Commerce called for them to withdraw the petition if they wanted a real discussion on green development.

“A stakeholders’ meeting probably should have happened before this was filed – not probably. It’s imperative that that had been addressed before this was filed,” said Terrence Smith, director of government affairs for the chamber. “If a developer wished to have some of zoning changed, it would have been expected to come in and talk to the community before it filed anything.”

Smith pointed out that as with all such zoning changes, the June 19 filing of the so-called Connolly petition for net-zero greenhouse gas building standards instantaneously changed the process of building, requiring developers to come in for a special permit even if the petition ultimately is rejected by vote of the City Council. That will continue until a council vote or until the petition expires Nov. 18.

“A discussion after you’ve reduced people’s rights is always harder to have than a discussion before,” said Terrence Smith, director of government affairs for chamber. “If a notice to withdraw is filed, I’m more than happy to bring a lot of people in to answer a lot of these questions. But at this point, the Ordinance Committee and Planning Board are where this is discussed.”

Cambridge zoning was already “complex and idiosyncratic,” Smith griped, and the petition would stifle rather than enable change.

The meeting, called by the Green Cambridge nonprofit that initiated the petition and led by Quinton Zondervan, its co-writer, drew some 30 people, including Mayor Henrietta Davis and city councillors Craig Kelley and Leland Cheung, as well as a representative for Tim Toomey and Minka vanBeuzekom; business leaders such as Smith, Bill Kane, vice president at BioMed Realty Trust, and Laury Hammel, executive director of the Sustainable Business Network; and others active in city politics, including Tom Stohlman, Sam Seidel and lawyer and former councillor Anthony Galluccio.

It was an awkward and cautious meeting, with occasional long pauses before someone opted to speak or ask questions, and at times people resisted joining the conversation.

Kane, whose company hosts the biotech company Genzyme in what’s been called “one of the most environmentally responsible buildings in North America,” was among the hesitant.

“I’m just here to listen,” he said when addressed, explaining that he was there representing the “extremely proud owner” of a LEED Platinum building interested in hearing potential effects to a “core component” of BioMed’s green strategy. “I’m not here to communicate concerns.”

But his admission about the 500 Kendall St. site – “the cost benefits relating to Genzyme Center far exceeded our expectations … we and Genzyme-Sanofi are still realizing lessons from that” – didn’t connect as well with the unhappiness of Smith and others in the business community as with the message of Green Cambridge and the first signer of its petition, Mike Connolly.

Pointing to various projects around the city, including Genzyme and its long-term energy contracts, Forest City’s considering raising its goal to 70 percent renewable energy from 35 percent and the city’s construction of a net zero school on Putnam Avenue, Connolly suggested that moving to a net zero standard wasn’t far beyond what was already happening in Cambridge.

“I have a deep respect for the concerns of the Chamber of Commerce and absolutely no desire to harm any of the interested parties – this is why we’re here having a conversation – but what gets me excited is these examples of how close we are to net zero already,” Connolly said.

Davis said there were between 75 and 100 LEED-certified projects in the city.

Organizers of the meeting also wanted to underline the message that the largest aspect of net zero construction was in conservation, not energy generation – in building a “tight box” that was insulated and equipped for energy efficiency and following through with energy-saving behavior. The message, which was repeated by Davis when she arrived for the meeting’s last half, was clearly obscured by language that mentioned buying renewable energy credits on the open market as an option for meeting net zero standards. (Although the price of renewable energy is coming down rapidly, according to several people at the meeting, with one person estimating costs were about 10 percent higher than getting energy through Nstar.)

The petition needs more detail, and its simplicity about the standards has to be matched by simplicity about how developers and tenants can do it, as the current text makes it “a pain to comply with bureaucratic requirements,” Stohlman said. Business owner Charles Marquardt had his own fears about the expenses tenants would face keeping up with net zero standards – and stated his own belief that discussion should have happened before the petition was filed.

“I just want to point out, we can amend the petition,” Zondervan said. “Again, if you have specific suggestions on how to make it better, we’re more than happy to do so.”

There was a contingent at the meeting, including Davis, who advocated a go-slow approach, despite evidence published in July in the Proceedings of the National Academy of Sciences that about half the residents of Cambridge would be “locked in” to a future below sea level in the next five decades. “I really have no doubt that we’re going to get [to net zero],” Davis said. “It’s great you brought this up … but I’m not sure it isn’t better to take the same measured approach as we did with LEED.”

Others resisted that message, saying the situation was already a crisis. “We do have a real tension here. I fully appreciate and understand the desire to go slow and figure this out,” Zondervan said. “But the hour is getting late.”

He said Green Cambridge would “consider” withdrawing the petition to get the business community to the table and engage with the experts and analysis Smith said the chamber had been accumulating as it pursued a greener agenda since the 1970s.

But Charles Teague, whose third attempt at a citizen petition against intrusive lighting – an attempt to solve a problem brought up by the council in 2007 – was voted down in July, warned that a simple withdrawal of a zoning petition meant it couldn’t be refiled for two years.

Resident Mark Jaquith also resisted the idea of withdrawal. After hearing Smith’s statement that conversation with informed stakeholders should have taken place before the petition was filed, Jaquith said, “This is a way to ensure that conversation takes place.”

This post was updated Aug. 16, 2013, to add that a representative of vanBeuzekom attended.