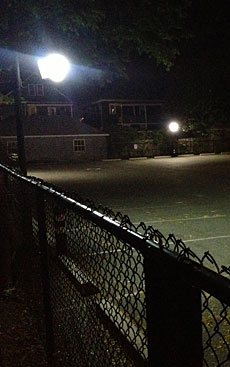 The six-year quest to get the city to enforce its own laws on intrusive lighting was made even longer Monday with a 5-4 vote from the City Council.

While a majority of councillors voted in favor of a petition written and pursued doggedly by citizen Charles Teague over the past two years, the change in zoning called for in the so-called Teague petition failed because it needed one more vote to reach a two-thirds majority.

“We don’t want to pass something that we’ll be correcting in a matter of months or six months or a year. We want to do this correctly and we want to give people legitimate relief from legitimate concerns that they have expressed to us,” said councillor David Maher, who voted against the Teague petition after saying council approval would be “us just passing something for the sake of passing something.”

Instead, councillors approved Mayor Henrietta Davis’ order for the city manager to form a task force that includes a lighting expert and draft a municipal law to keep lights from glaring into neighbors’ windows – an approach suggested by the Planning Board in a July 16 letter saying “a comprehensive lighting ordinance, with clear standards and processes for enforcement, would be the best and most direct way to address the concerns raised by members of the public regarding intrusive light.”

In the same letter, Hugh Russell, chairman of the board, said the Community Development Department had tried on its own to write improved zoning, but it was also rejected. The board could try again in the fall, when it returns from a summer break, Russell said.

That second try could “possibly [be] voted on before the end of the calendar year,” he said, while Davis’ order made the end of the year the definitive deadline for the city manager to report back with proposed language for city law and zoning.

In urging councillors to let his own zoning change through, Teague noted that the issue was nothing new. Despite current laws saying light fixtures should be “installed in a manner that will prevent direct light from shining onto any street or adjacent property,” there have been complaints from around the city for at least a half-dozen years that the law isn’t being followed – with the Inspectional Services Department saying it is helpless to enforce the law in part because there are no inspectors who work at night to assess whether a neighbor’s complaint about glare is valid.

Russell, though, despite calling current zoning “common-sense,” said he doesn’t want a law that relies on a city inspector’s discretion, which he fears could “lead to a proliferation of issues requiring resolution by the Board of Zoning Appeal or in courts.”

Unfortunately, none of the council effort is new, either.

In November 2007, an order sponsored by six of the current nine councillors called on the city manager to “confer with relevant staff members and report back … on the city’s program to enforce the city’s light ordinance,” and when that effort evaporated Davis hosted a February 2009 meeting of her Health and Environment Committee on many of the same concerns, with Davis concluding, according to notes presented to the full council, “that perhaps it is time to take the regulation of lighting to a more sophisticated level of establishing quantifiable requirements.”

“I’ve been following this issue with great interest and I very strongly believe that there should be some regulations relating to this outdoor lighting issue,” Davis said Monday, a full four years and five months after her committee meeting. “I’ve been hearing about it for years from people who’ve been feeling terribly uncomfortable about existing lighting shining into their homes.”

Change would affect only new lights

Davis, who voted against the Teague petition, said she shared a Planning Board objection – cited also by Maher – that it would fail to fix “many if not all of these existing issues,” despite explanations offered by Teague, other residents and councillor Minka vanBeuzekom on why a zoning change would still be a good thing. (The board had other concerns, including that even porch lights could get caught up in new zoning, but did not go into detail on its inability to insert language that would have prevented such confusion.)

“The Teague petition changes things for new construction and changes of use,” resident Marilyn Wellons said, saying she approved of the petition in part because it ensured that “new buildings will have new and conforming lights.”

Teague agreed, confirming his belief that “further discussion will take years of delay, and in those years more lights will be installed” under unenforceable rules; vanBeuzekom added that the change would let city inspectors address residents’ complaints wherever lighting had been installed illegally even under current zoning.

“The issues that were raised by the Planning Board are not necessarily germane and don’t weaken the way the Teague petition is set up,” vanBeuzekom said, noting that the petition would also apply rules everywhere in the city, matching an expansion of residential areas over the years.

She did agree with the board on one thing: The zoning change wanted by Teague and changes to city law proposed by Davis were complementary, not mutually exclusive.

Teague signed on to that idea as well.

“I support Mayor Davis’ light order. It’s the right thing to do – so long as we pass this tonight,” Teague said, speaking before the votes that killed his third attempt at a light petition but passed her order. “I agree with the Planning Board that a municipal ordinance is best, but a modern lighting ordinance has complex policy decisions” including a likely need to make rules about illuminated corporate signs, an issue that created a political firestorm in late 2010 and forced councillors to rescind a law they’d passed 6-3 only a few weeks earlier.

With passage of Davis’ order, the city manager has six months to produce a report.

In addition to Davis and Maher, the votes against the Teague petition – which expires Aug. 19, before the council is back from its summer break – came from Ken Reeves and Tim Toomey. In favor were Leland Cheung, Marjorie Decker, Craig Kelley, Denise Simmons and vanBeuzekom.