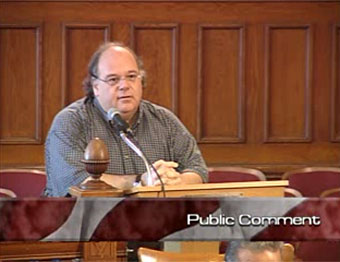 Saul Tannenbaum, of the group A Better Cambridge, wants a citywide plan beating back greenhouse gas emissions instead of a proposed zoning petition targeting new development.

Everyone wants their say about net zero, the citizen proposal to set higher environmental standards on big construction projects. Presenting the idea and getting public comment took up most of a three-hour City Council Ordinance Committee meeting Wednesday, leaving little time for councillors’ questions and resulting in suggestions of additional committee meetings and in-depth work sessions in addition to council field trips.

This followed a Tuesday meeting of the Planning Board at which, Acting Deputy Director for Community Development Iram Farooq said, board members didn’t have time for discussion after all the public comment there and needed to schedule a second meeting for their own conversation.

And just as there are delays caused by intense public interest, many opponents feel the issue is so important and urgent that they actually oppose the proposed zoning petition.

“It’s the wrong answer to the right question,” said Saul Tannenbaum, of a citizens group called A Better Cambridge that opposes the plan and seeks instead one that overlays green goals on the city as a whole via better transportation and a smart energy grid. “We should be talking about this for the entire city.”

It was part of a conversation that rebounded throughout the meeting, bouncing from speaker to speaker, opponent to proponent, starting with a presentation by the citizens group whose members wrote the net zero zoning petition, the Cambridge Committee for Net Zero Buildings. Called the Connolly petition, after first signer and campaign manager Mike Connolly, it calls for developments of 25,000 square feet or more to take any steps necessary to avoid greenhouse gas emissions – including being built to use very little energy; generating energy onsite, such as by adding solar panels; negotiating contracts to use renewable energy generated offsite; or buying renewable energy credits to offset energy use.

The council adopted a Cambridge Climate Protection Plan in December 2002 that aimed for an 80 percent reduction in greenhouse gas emissions by 2050 – a goal matched by the state, but one that has been slipping further away and contributing to the need for interim measures aimed at 2020. Meanwhile, evidence published in July in the Proceedings of the National Academy of Sciences says that about half the residents of Cambridge would be “locked in” to a future below sea level within the next five decades.

The petition targets buildings because 82 percent of greenhouse gas emissions in Cambridge come from buildings, said co-author John Pitkin, citing a 2007 CDD report. “A primary reason emissions have been going up is new building construction, and we’re in the middle of a building boom,” he said.

That led to Tannenbaum saying that the petition would fail in its goals because it affects only new buildings, and “we should be going after the existing building stock and not putting the entire onus on new development.”

That was echoed by George Metzger, an architect and president of the Central Square Business Association, who noted that by targeting big development the petition would affect only 1 percent or even 0.5 percent of the building stock each year.

Responses came from resident Heather Hoffman, who called the Connolly petition just one piece of potential environmental reform that would spark ideas “we can’t even imagine,” and proponent Charles Teague, who said that, like the adoption of the stretch energy code in December 2009, going into effect the next year, this was “another step. You have to take each step, and this is just one.”

In addition, in answer to councillor Ken Reeves’ concerns that he was seeing buildings that were coming down after only about 50 years of use, petition co-author Quinton Zondervan pointed out that “50 years is a long time. That’s a lot of greenhouse gas emissions” – implying as well that the 1 percent or even less of building stock turnover per year cited by Metzger was going to have a cumulative effect.

Fail to enact the petition, though, former resident Brock Adler said, and new development’s “inefficiencies will be lasting 50 to 100 years.”

A refrain among the public comment came from construction union representatives who opposed the petition because their members were finally getting an income after there being “no work in Cambridge for the past half-decade,” according to Brian Doherty, general agent at the Boston Building Trades. Several pro-petition speakers seemed dubious that development would suffer in Cambridge – one of the few cities in the country where construction actually went on unabated throughout the Great Recession and its aftermath despite what Terrence Smith, director of government affairs for the city’s Chamber of Commerce, called an “already complex and idiosyncratic” set of zoning and construction regulations.

A Better Cambridge agrees the petition will send developers off to the suburbs, but some residents made the point that it was exactly because Cambridge was invulnerable to development downturns that made it the ideal community to lead by example on cutting greenhouse gas emissions. “We need to stop piloting and studying and start doing,” Eric Grunebaum said. “Other cities will begin to follow suit.”

Kelly Thompson Clark, president of the chamber, didn’t seem to be buying. She feared the petition would have a “serious negative impact on Cambridge’s economy.”

Resident Mark Jaquith scoffed, noting that the chamber had also opposed the stretch code, which didn’t stop the flood of development to the city but did bring a flood of LEED-certified buildings, and had also expected disaster resulting from a smoking ban in Cambridge bars and restaurants, “but now Cambridge is a dining and entertainment destination.”

The largest note of opposition, heard from Thompson Clark and other business representatives, union reps, citizens and city officials, was that there had to be more discussion with more stakeholders to avoid unintended consequences for commerce and the city’s lower-income renters and potential homebuyers.

Writers of the petition have welcomed suggestions for changes before the council votes or it expires Nov. 18.

“This amendment needs to be reworked,” resident Gerald Bergman said, expressing his wish to see its impact on affordable housing spelled out. “But let’s have a sense of emergency about it.”