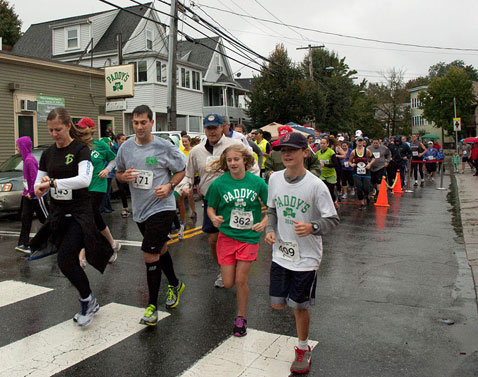 The annual 5k run and block party organized by the Paddy’s Lunch bar benefits girls softball, but the following block party will be farewell to Masse Hardware.

The annual 5k run and block party organized by the Paddy’s Lunch bar benefits girls softball – but this year the girls face competition for attention in a whole different league.

On Sept. 29, immediately after the 10 a.m. run, will be a block party that this year will serve as a farewell to Masse Hardware, said Ruth Ryan Allen, the owner of Paddy’s.

“We intend on making this block party a farewell and thank you party for the staff and Dave,” Allen said, referring to David Masse, the retiring third-generation owner of the nearby hardware store. “We are losing a great resource in Cambridge with Masse closing, and they deserve a great goodbye after 125 years.”

Masse’s closing sale was reported Friday. Masse, 73, said he’s been ready to retire for a decade, but only recently managed to sell his 249 Walden St. store’s parking lot to a developer for an apartment building. His own store will also be converted to apartments, and he’ll oversee them as landlord.

Paddy’s will have good reason to miss Masse Hardware: The bar has been a Cambridge mainstay since 1934, which means it’s been only about 100 feet from the hardware store since its opening 79 years ago – which still makes it a youthful establishment compared with Masse’s, which has been in business since 1888.

Paddy’s is at 260 Walden St. The run is expected to take about an hour, with the block party and its beer garden closing traffic on Walden and running from about 11 a.m. to 6 p.m. Parking will be available at Danehy Park.

For information on the block party and the run, including the route, cost and how to register for it, visit the website here. Allen can sent e-mail by clicking here.