Bloggers name their best Thai restaurants, and Cambridge has four among the top 10 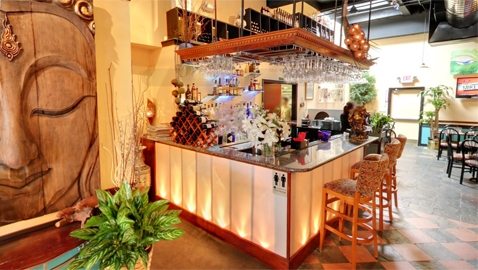 Bloggers name their best Thai restaurants, and Cambridge has four among the top 10

The Similans, on First Street in Cambridge, came in second in a ranking of 26 area Thai restaurants. (Photo: Google)

A couple of dedicated Somervillians have announced the winners in their 26-week journey through the area’s Thai restaurants, and Cambridge comes out looking pretty good – and would have looked even better had not a multiple award winner just closed. The city has four restaurants in the top 10.

Bloggers Julie and Alyssa of Thai Tuesday set about sampling and reviewing the area’s Thai restaurants at the end of August 2012, buying crispy rolls, vegetarian pad Thai, a bonus dish that changed each visit and a Thai iced tea and rating each place for atmosphere, food and value on a 10-point scale. (Their Google docs spreadsheet showing their visits and math is here.)

Thursday’s year in review post gave the overall best score – 7.7, or somewhere between “good” and “very good” on the Thai Tuesday scale – to Arlington’s Thai Moon, where the decor is “peaceful, thoughtful and vibrant” (and won best atmosphere in the wrap-up) and the food provides a “solid value for a very solid meal,” albeit with a pricey but “definitely the best we’ve had so far” pad thai.

In second place, though, was The Similans (145 First St., near the Lechmere green line T stop in East Cambridge), close behind with an overall score of 7.63. “It was a bit more expensive than other places ($10.95 for pad thai), but the food was so good (leftovers!) and the atmosphere so transporting that we were happy to pay a little more,” the bloggers said. The Similans was deemed the best pad thai, took second in best atmosphere and third for best food overall.

Thailand Cafe, the 302 Massachusetts Ave. restaurant that was deemed to have some of the best Sichuan Chinese food in the area, closed in July in expectation of the block being razed to make way for a Millennium Pharmaceuticals office and lab building with ground-floor retail. Thailand Cafe was called the third-best value of the restaurants reviewed by Julie and Alyssa, as well as the best food – Sichuan, not Thai – and the best bonus dish in Chendu fried dry hot chicken.

The complete rundown is here.