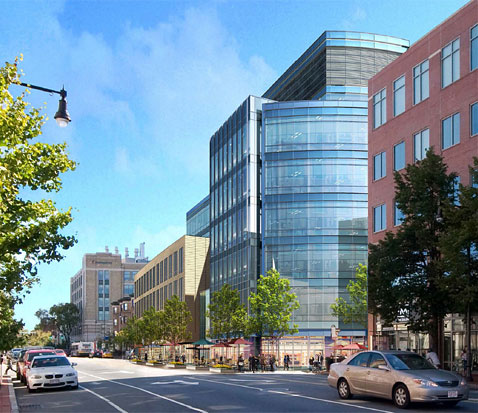 A building proposed for near Central Square feels too corporate for its position on Massachusetts Avenue, a Planning Board member member said Tuesday.

Developers and MIT officials left the Planning Board meeting Tuesday without a special permit for construction of a 246,716-square-foot building near Central Square and having raised doubts in at least one board member’s mind about how city zoning gets applied.

The way developer Forest City has stacked mechanical needs such as ventilation and air conditioning atop designs for 300 Massachusetts Ave. “quite frankly makes height a joke in our zoning, it really does,” board member William Tibbs said. “The whole purpose of having height in studies is that we limit the effects a built structure has at certain heights. And when you can put two and three and four stories of mechanical stuff on top a line of zoning height … it makes me retroactively rethink this use as appropriate so close to Mass. Ave.” 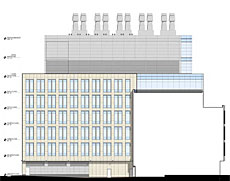 The proposed building rises to about 95 feet; the mechanical penthouses spike to 129 feet; and cooling towers and fans poke up roughly another story.

The building rises to about 95 feet; the mechanical penthouses spike to 129 feet; and cooling towers and fans poke up roughly another story above that. Until Forest City won its zoning in February, the height limit for buildings in the area was 80 feet with mechanicals.

“I can’t do anything about it because that’s what the zoning is,” Tibbs admitted. “It’s a struggle and a problem we have in the city, and it’s something the board will really have to start looking at for other things in Central Square,” he said of building height and size.

Central and Kendall squares have been through years of examination of how they will be transformed in the coming years, with consultant Goody Clancy suggesting in a $350,000 study that the city allow building taller and denser in Central to bring as many as 2,000 units of housing lived in by enough people to support new, vibrant retail and restaurants.

The Goody Clancy approach hasn’t been approved by the City Council, but the Cambridge Development Department said in late March that it was hoping to present the plan to the council before its July 29 meeting.

The zoning for 300 Massachusetts Ave. was approved in February, though, and the site has been leased by Millennium Pharmaceuticals in anticipation of construction, said Forest City’s executive vice president and chief operating officer, Peter Calkins – despite corporate changes announced in May that could bring cuts to the company’s 1,200 local staffers as it splits off its cancer research into a group called Takeda Cambridge US, after Japanese parent company Takeda Pharmaceutical.

Some 15,000 square feet of ground-floor retail at the building will be leased with the help of Jesse Baerkahn, president of CityRetail, which has been credited with boosting Kendall Square as a residential center with a strong mix of mainly local businesses.

But the road to a zoning change and construction that began some three years ago for the Massachusetts Institute of Technology and Forest City, its developer in University Park, led to a new roadblock Tuesday: The New England School of English, which is based in Harvard Square but has a student dorm called Green Hall that bumps up against University Park on Green Street near Central Square.

“I’m not opposing the building, I’d just like the same consideration you’re showing to the building that MIT owns,” said Anna Shine, president of the English school, referring to design changes made in sensitivity to Random Hall, an institute dorm at 290 Massachusetts Ave. A lawyer for the English school objected to how the height of the proposed building is applied and asked for a more complete shadow study and consideration of how its floor-to-ceiling windows interacts with the rear of Green Hall, which is only a few feet away.

“If my young Latin women are being peeped at by all these scientists, I have a problem,” Shine said.

Shine also worried about how she would be able to park at her own building after the transformation of the current so-called All Asia block, named after the relocating nightclub. The changes include using Blanche Street, which runs from the avenue to Green Street, as a combination pedestrian promenade and path to the new building’s loading docks. 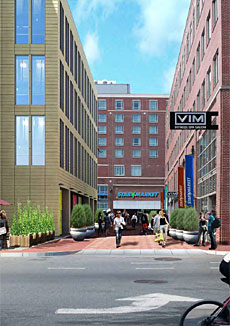 Blanche Way, a narrow path running from the avenue to Green Street, is to be expanded into Blanche Street, a combination pedestrian promenade and path to the new building’s loading docks.

Blanche Street’s combined use drew the attention of a few people during Forest City’s hour-and-a-half hearing, starting with resident Charles Teague during public comment. At least three of the eight board members on hand noted concerns about Blanche Street and its use as a service alley, while others talked about adding traffic and worried that calculations of the building’s effect on traffic was based on old data.

“You’ve got truck loading, pedestrian traffic, vehicular traffic, bicycles, a cafe. It’s an awful lot going on along the street in the renderings,” Tom Sieniewicz said. “I just want to be very clear about the details that are being cemented in the special permit that will be very important to the success or failure of the project as a whole.”

Members and residents also wondered at some of the aesthetics of the proposed building, including a rounded sweep of glass envisioned for where the avenue meets Blanche Street. Chairman Hugh Russell defended the penthouse of mechanicals equipment as being effectively masked by more use of glass, but seemed to express concern about unrelieved stretches of terra cotta and windows on the other end.

But none was more critical than Tibbs, who said he was a fan of tall buildings but alarmed by Millennium’s combination of size and height – despite”a great job” at breaking it into sections to make it feel less massive – and its corporate feel.

“The overall impression of the building is that it’s a building that belongs to University Park more than it belongs to Central Square,” Tibbs said. “One of the concerns I have with letting the zoning go forward is that we might lose that opportunity to really integrate” the building into the community.

The special permit hearing returns to the Planning Board on Aug. 6.