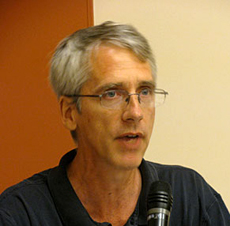 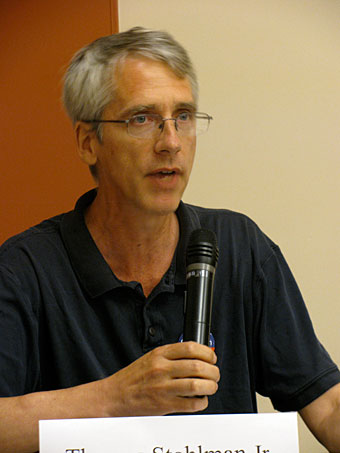 Tom Stohlman takes a question at a 2011 forum for City Council candidates. In December he complained councillors were breaking the law, and the state has agreed. (Photo: Marc Levy)

The City Council violated state law in its vote to appoint Richard C. Rossi city manager, according to a June 4 finding by the attorney general’s Division of Open Government.

After an aborted attempt at a short-term search process to replace the retiring Robert W. Healy, the council caucused by e-mail and, upsetting several members of the public, came into a Dec. 3 meeting with an order ready to go promoting Rossi from deputy city manager as of July 1.

“I’m appalled by how we’ve bypassed the public process,” said resident Mike Nakagawa during public comment, echoed by residents such as Elie Yarden, who spoke of “total mistrust” in city government, Gary Dmytryk, who asked councillors to see how their move had “all the appearances of cronyism [that will] inspire feelings of cynicism” and Pebble Gifford, who felt Rossi’s three-year appointment would begin “under a cloud, a serious cloud.”

But it was Tom Stohlman, who has run for City Council, who asked the attorney general to look into the council’s years-old process of soliciting co-sponsorships for policy orders by e-mail. While City Clerk Donna Lopez and councillor David Maher said the solicitation of co-sponsorships avoided breaking the law by using Lopez as the means to send around orders via e-mail, Stohlman didn’t see it.

“The moment that a quorum of the councillors see each others’ reasoning and their willingness to sponsor an order, they are deliberating,” Stohlman said. “The fact that it is being [facilitated] by an agent, the city clerk or anyone else doesn’t make it legal.”

The state agrees, said Hanne Rush, an assistant attorney general with the Division of Open Government.

“The e-mail communication sent by Ms. Lopez at councillor Maher’s request crossed the line into impermissible deliberation. While the e-mail was sent by a person who was not a member of the council, and the councillors responded to her individually, the attachment relayed the.opinion of the four original co-sponsors – that is, their support of the order – to the remaining five councillors,” Rush said. “Thus the e-mail constituted communication between or among a quorum of the council, facilitated by Ms. Lopez.”

“A public body may not use a non-member, such as a staff member, to communicate on matters that it would otherwise save for discussion at an open meeting,” Rush said.

In this case, it was Maher – whose Government Operations and Rules Committee had been in charge of the failed short-term search process – who sent an e-mail to Lopez asking her to “share the attached order … and ask if [the other councillors] would like to co-sponsor.” It was already co-sponsored by Leland Cheung, Ken Reeves and Tim Toomey, Rush said. After seeing the e-mail, Mayor Henrietta Davis and Marjorie Decker joined the order by calling Lopez. Vice mayor Denise Simmons called to join but missed the deadline.

When the order appeared on the meeting agenda, it did have Simmons’ name on it, along with the six other councillors’ name. Minka vanBeuzekom voted in favor of Rossi’s appointment when the policy order came up, leaving Craig Kelley the sole “no” vote.

“It’s a question of us doing or not doing our jobs, and we did not. We abjectly failed,” Kelley said.

Stohlman told the state he’d reviewed hundreds of policy orders over the past two years and found a “strong correlation” between co-sponsorships and final votes. “It is hard to find an order among the hundreds offered by a quorum of the council where there is any variance,” Stohlman said.

City officials, on the other hand, argued that the co-sponsorships show only support for an order being put on a meeting’s agenda. Such support is actually irrelevant to the council process, though. A single councillor can put forward a policy order, where it can be supported during a public vote.

The council has been breaking the law for as long as it’s been using this method of soliciting co-sponsorships, Rush said, but there’s a simple fix for the problem: Solicit co-sponsorships for an order without listing any councillors names on it at all. When the order is revealed at the council meeting, councillors and the public will see who co-sponsored at the same time.

“Alternatively, a council member who introduces an order can request sponsors during a meeting, or at a prior meeting before the order is introduced,” Rush said.

She also said – independently of Stohlman’s complaint – that the meeting minutes were inadequate because they didn’t have “enough detail and accuracy so that a member of the public who did not attend the meeting could read the minutes and have a clear understanding of what occurred.”

She ordered “immediate and future compliance” on both issues and and warned that “similar violations may be considered evidence of intent to violate the law.”

A Jan. 6 commentary piece in Cambridge Day recommended an end to the co-sponsorship process on policy orders.