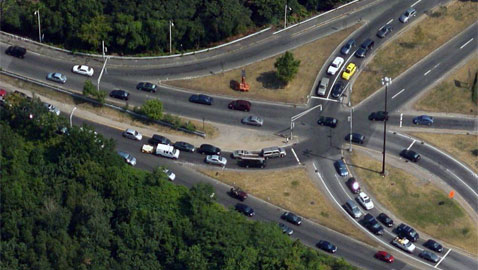 The welcome wagon is going to get a workout. There will soon be more than 2,400 new neighbors in eight apartment complexes under development in Cambridge between Route 2 and Concord Avenue. Ranging in size from 61 to 398 units, these structures will increase Cambridge’s population by more than 2.25 percent – and a lot of that new population is going to be leaving for work at the same time as Belmont’s residents. Traffic at Alewife and Fresh Pond will get even worse.

How could this happen? Easily. Any individual development doesn’t have much effect on traffic around Alewife and Fresh Pond. The decision document issued by Cambridge’s Planning Board for the 398-unit 160 Cambridgepark Drive, which is predicted to cause 1,324 new trips, states, “The project is expected to have minimal impact on traffic and will not cause congestion, hazard or substantial change to the established neighborhood character.”

Ominously, the decision continues: “It is also noted that the traffic generated by the project is anticipated to be less than that associated with the office/research and development project on 150, 180 and 180R Cambridgepark Drive, for which entitlements currently exist under a previously granted special permit.” In short, if the city of Cambridge accepted a potential increase in traffic for a special permit in the past, the city should accept that increase in traffic for all future permits – no matter how much the population has increased in the meantime.

All of these developments are theoretically within walking distance of the Alewife MBTA station, two grocery stores, a drugstore and many other amenities – but it’s difficult actually to walk to all these places from any of the developments. The problem is the commuter rail tracks: The tracks cut off the Alewife station and the housing on Cambridgepark Drive from the shopping and keep the Concord Avenue and Fawcett Street residents from getting to the T.

The single obvious pedestrian connection between Concord Avenue and Cambridgepark Drive is a narrow sidewalk that runs right alongside Alewife Brook Parkway from the Fresh Pond rotary to the Alewife T stop, but it’s unprotected.

No trees or shelters provide protection from the summer sun or winter wind, there are no benches where walkers can rest – and walking directly next to a four-lane highway and parking lots is unpleasant in the mildest weather. Bicyclists and pedestrians could cross from Cambridgepark Drive to the east side of Alewife Brook Parkway in other ways – via the underpass at Alewife Station, and down Rindge Avenue to Sherman Street, for example – but those routes are lengthy and go far out of the way.

Cambridge does have a plan for making the area more bicycle and pedestrian-friendly, eventually. On July 29, the City Council awarded $375,000 for a feasibility study for another pedestrian bridge across the railroad tracks. The bridge was recommended in Cambridge’s 2006 Concord Alewife Planning Study, and the developers of 160 and 130 Cambridgepark Drive were required
to contribute money towards the study and to reserve open space for a possible bridge in their project designs. “All projects on the north side of the railroad tracks have provisions for a pedestal for a bridge,” said Jeff Roberts, a staff project planner in Cambridge’s Community Development Department.

The current study is simply a study, though. Building a bridge may not be feasible. If it is,
it will have to be designed, put out to bid and built – a process that could take years and millions of dollars. 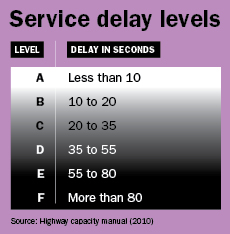 The bridge may be too late. Alewife’s traffic is already approaching gridlock, and the new developments are going to make local traffic slightly worse. A Jan. 18, 2011, memorandum about the Residences at Alewife at 231, 233, and 235 Concord Turnpike (the former Faces nightclub site) listed five out of seven intersections at the site as having a level of service as D or below during morning and evening rush hours, which means traffic is delayed at least 35 seconds.

The Residences at Alewife alone will increase traffic along Alewife Brook Parkway at Rindge Avenue by almost 1 percent – just a block from where all the Cambridgepark Drive residents will be starting their morning commute.

According to city estimates, those six combined developments will produce an estimated 6,364 more car trips per day on Concord Avenue, Route 2 and the Alewife rotary. This is not a trivial increase. The average total weekday daily traffic on Alewife Brook Parkway between Cambridgepark Drive and Concord Avenue was 27,000 trips per day, according to a 2006 study by the Boston Metropolitan Planning Organization.

Concord Avenue and the Alewife Brook Parkway rotary won’t escape traffic woes. Cambridge’s 2005 Concord Alewife Plan included a “critical movement analysis” of the area. Critical movements are conflicting traffic movements. They are the times vehicles block each other from moving, such as when a car turns left and crosses a lane of oncoming traffic. The Concord Alewife Plan reports that for the area roughly bounded by the Route 2/Route 16 intersection, the Alewife Brook Parkway and Concord Avenue, service starts to deteriorate when a roadway reaches the “critical sum” of 1,500 vehicles per hour (or 1,800 vehicles per hour for rotaries). Below those numbers and most motorists can get through an intersection in two or fewer light cycles; above those thresholds, you’ll wait at that light a long time.

As of 2005, the Concord/Route 2 rotary was already operating at 1,880 critical interactions – 80 above the threshold – with a total traffic volume of 4,300 trips per day, while Concord Avenue at Blanchard Road had already reached 1,400 “critical sums” per hour, with 2,460 trips per day. The report also predicted vehicle trips per day for 2024 for the area after Cambridge’s rezoning (which Cambridge enacted in June 2006). The permitted 70 Fawcett St. development, which will be between these two intersections, by itself promises to add enough vehicle trips to reach the predicted 2024 buildout trip level by 2014 – and there’s plenty more space for apartments and garages alongside between the Concord Avenue rotary and Blanchard Road.

To be fair, the developers of these various projects are trying to make car-free commuting more attractive to their residents. Several of these buildings have extensive bicycle-parking facilities, including the Faces site and 160 Cambridgepark Drive. But the city doesn’t anticipate that those bicycles will get much use. For 398-unit 160 Cambridgepark Drive, for example, the city estimates the residents will make 1,324 daily car trips and 202 pedestrian trips, but just 98 journeys by bike.

The builders along Cambridgepark Drive are also planning to share their parking facilities with local businesses. Once their residents have left for their daily stint of idling on Alewife Brook Parkway, those buildings’ parking spaces will be available to employees.

T will be crowded

Of course, some of these buildings’ residents will take the T to work – if they can fit on the T. As of 2010, the Alewife MBTA station had an average of 10,657 boardings per day on weekdays, and the developments planned around Alewife will increase boardings by 30 percent, adding another 3,202 trips per day.

The red line is already “congested” and running at capacity, according to a June 2012 study by the Urban Land Institute titled “Hub and Spoke: Core Transit Congestion and the Future of Transit and Development in Greater Boston.”

Replacements are needed for 74 cars, about one-third of the fleet, built in 1969-70. Vehicle availability, as tracked by the MBTA scorecard, is already problematic. The red line has been able to run with the 168 vehicles needed, but barely – there are generally 171 or 172 red line cars available at any given time. Recent breakdowns on the red line may well become a common occurrence if the hoped-for procurement is delayed due to lack of funds and the number of available vehicles falls below the minimum number needed to maintain current capacity.

Yet more and more commuters are taking the red line. The city predicts that by 2030, Kendall Square commuters alone will account for 3,000 more red line trips per day.

The MBTA is looking into connecting the Alewife MBTA stop with commuter rail to help suburban commuters get into Boston faster. In 2005, the MBTA rejected putting in a commuter rail stop at Alewife because there wasn’t enough new ridership projected to make up for the delays other commuters would suffer. But since then, the area has grown rapidly.

For now, the MBTA is considering using small trains called diesel multiple units to link Alewife with an as-yet-unspecified commuter rail stop, according to Brian Murphy, assistant city manager for community development. DMU cars do not have separate engines; each car can be powered and steered by itself, allowing for varying capacity to match demand.

Meg Muckenhoupt is editor of the Belmont Citizens Forum Newsletter, where this article first appeared.