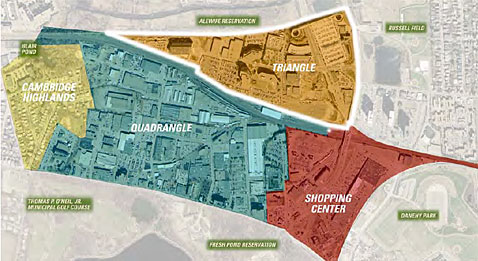 There is renewed city interest in a bridge getting pedestrians and bicyclists safely over the commuter rail tracks separating the Alewife Triangle and Quadrangle. (Image: City of Cambridge)

With some 2,000 more apartments and condos on the fast track for construction in the Alewife area, the city is looking anew at adding public transportation options and a bridge across the train tracks for use by pedestrians and bicyclists.

Monday’s meeting of the City Council awarded $375,000 for a feasibility study of a bridge – a revival of an idea in the Concord-Alewife Plan completed nearly eight years ago proposing a link between the so-called Alewife Triangle (the 60-acre area north of the commuter rail tracks and between the Alewife Reservation and Alewife Brook Parkway) and Quadrangle (the 130 acres south of the tracks between the Cambridge Highlands neighborhood and area shopping center).

While some conceptual design work could be squeezed out of the money approved by the council – itself given to the city with rights for the bridge’s end points by developers needing special permits to build on Cambridgepark Drive and Fawcett Street – “this is the kind of project that could be extremely expensive,” said Brian Murphy, assistant city manager for community development. “By the time you added related costs such as design and inflation, contingencies, et cetera, it would not surprise me if we were looking at $20 million or more.”

As of late last year there four area projects considered or under way for about 1 million square feet in development, bringing about 2,000 residents making a daily 5,080 car trips and 2,620 bus and T trips. About 68 percent of the proposed units were studios or had one bedroom; 31 percent had two bedrooms; and the family-size, three-bedroom units made up less than 1 percent.

Yet in addition to nearby nature areas such as the Fresh Pond Reservation and Blair Pond, the area hosts innovation industries locked out of a crowded Kendall Square and is zoned for light industrial use.

With growth in the area as a spur, transit officials are looking at connecting the Alewife T stop – a major hub for drivers from the suburbs who want to take the train to jobs in Cambridge and Boston – with commuter rail via short-trip “diesel multiple units,” Murphy said.

The DMUs are being looked at first on the Fairmount line in Boston, “with the idea being that if you’ve got a line that doesn’t really justify a full train and all the cost that goes with it, instead you look at a smaller, self-contained vehicle that would allow you to run more frequently and with smaller capacity, closer to being full,” Murphy said. “The MBTA seems pretty serious about this.”

The MBTA rejected the idea of an Alewife commuter rail stop because of studies showing that potential new ridership there was “insufficient to justify delays and potential loss of ridership due to increased travel time,” according to the 2005 report. But the area has grown rapidly.

That makes it a good time to talk with the agency about adding service, Murphy said, and he planned to meet regularly with Department of Transportation officials about easing some of the burden of the roughly 3,000 bus and T trips coming soon to Alewife.

“It’s definitely going to help with congestion right now and the congestion that will probably come in the future,” councillor Minka vanBeuzekom said.

That also makes a pedestrian and bicycle bridge offering access an even more important project to prepare for, and Murphy expressed confidence that the feasibility study would pave the way. “We would be surprised if this were not to be feasible,” he said.

Still Murphy called it “a challenging site” with environmental issues as well as complications brought on by the railroad tracks themselves. It wasn’t yet clear where on Cambridgepark Drive and Fawcett Street the bridge will start and stop, but the landing point north of the train tracks was important because it connected pedestrians and bicyclists with the Minuteman Commuter Bikeway and the Alewife T station.

Developers such as McKinnon could be a continuing source of money for building the bridge – Murphy hinted at coming back to the council to craft a funding approach “tailored to ensure that those who were benefiting from this bridge would also be those who were helping support its construction” – and councillor Leland Cheung wondered if Alewife made sense as the home of Cambridge’s first formal business improvement district, where property owners get together to pay for services beyond what city government provides.

“It may make sense as one possibility to explore,” Murphy said.