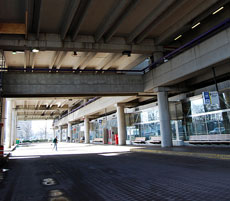 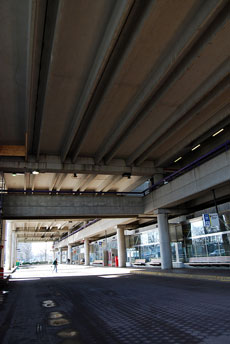 A second shuttle bus service to New York is on the way to Alewife, at the end of the red line in Cambridge.

Horizon Bus Line would run shuttles between New York and Cambridge seven days a week from 7:30 a.m. to 11:40 p.m., if the City Council gives its approval Monday. The city manager recommends council approval based on support won by Cambridge resident Deo Tumwine at the Nov. 26 meeting of the License Commission.

The shuttles would cost $27 per passenger, and its 57-passenger buses would also make stops in Woburn, Waltham and at Newton Riverside Station, according to minutes of a May meeting of Newton’s Board of Aldermen, where Tumwine’s plan won unanimous approval.

World Wide Bus (now GoBus) paved the way in October 2010 and still runs buses several times a day between Cambridge, Newton and New York, charging $18 per weekday trip and between $22 and $32 on the three weekend days.

There remain at least a half-dozen bus lines running between Boston’s South Station and New York, including the Lucky Star line that has just returned to service after being shut down in June with the legendary Fung Wah bus for safety reasons. (Fung Wah is also on the way back, according to The Boston Globe – represented by lawyer Jeffrey Mullan, the former state transportation secretary who also advises the Cambridge Redevelopment Authority.)

While only three years ago prices for a New York bus trip could get as low as $15, the new standard in Boston and Cambridge is around $25. With new safety requirements for the cheapest services, the price proposed by Horizon is on par, and the difference in time it takes to travel to New York from either city is negligible. Horizon’s additional two stops could add a few minutes.

The company Tumwine runs that would operate the bus service, Diaspora Investment Association, is based in Waltham.

Update on Feb. 24, 2014: The License Commission revoted the bus service application Feb. 11, 2014, after learning Tumwine’s agreement with the MBTA gave him permission to use Alewife bays on Saturdays and Sundays only. The council accepted the commission’s approval of Saturday-Sunday runs Feb. 24, 2014, without comment.