Member’s Lounge will be a 21st century comedy salon, or maybe just be weird 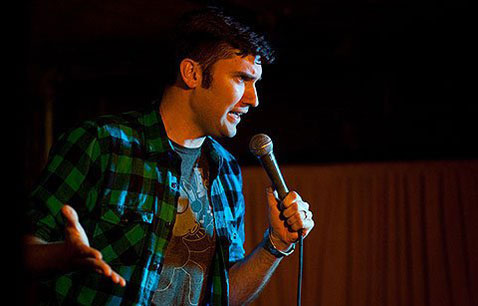 Member’s Lounge will be a 21st century comedy salon, or maybe just be weird

Ken Reid appears in comedy venues throughout the area, although not often with traditional standup comedy.

Ken Reid thinks the local comedy scene isn’t weird enough, and he’s doing something about it. Thursday, in fact, with a show called The Member’s Lounge.

“It’ll be different, something you can’t see at all the other venues in the city every night. One thing I really miss in comedy now is that there doesn’t seem to be as many weird shows. It’s mostly just showcases or open mics, that’s it,” Reid said. “I feel like we had a lot more actual shows that felt like shows. I want to get that going again.” 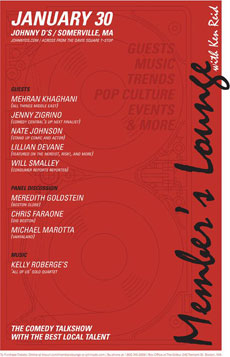 Reid has always been unique in Boston comedy, running auctions of worthless items, analyzing strangers’ yearbooks and leaning away from classic setup-punchline joke-telling toward long-form looks at his life through the filter of John Cusack films or his T-shirt collection. The approach has led to some interesting places – he just got back from Los Angeles, where he performed alongside comedy stars such as Thomas Lennon, Andy Daly, Brendon Small and Bobcat Goldthwait in a “Storytime for Grown-Ups” event hosted by James Urbaniak for KCRW-FM’s Riot LA alternative comedy festival.

Now it’s led to a partnership with The Wilbur, the Boston theater known for bringing to town the biggest names in comedy, for the Member’s Lounge.

It lets Reid add a little more of his oblique approach to comedy to the Boston scene with what he’s calling a variety talk show (and what Wilbur theater management is calling “a 21st century comedic salon with plenty of unrelated tangents and surprises”).

“We’ll have standups on, but they won’t be doing their material, they’ll be doing presentations on different topics,” Reid said. Signed up for the first Lounge are Mehran Khaghani, Lillian DeVane, Nate Johnson, Will Smalley and Jenny Zigrino.

The second half of the show will gather experts on various topics for a panel discussion and audience Q&A: Meredith Goldstein, the relationships columnist for The Boston Globe; Chris Faraone, the politics pro of Boston Phoenix fame who’s now news and features editor for Dig Boston; and music expert Michael Marotta, another Phoenix alum as well as founder and editor of online music magazine Vanyaland.

Not weird enough? The house band makes up for it: The “four-person quartet” known as All of Us that’s even better known as singer and saxophonist Kelly Roberge, although on stage (and Twitter) he’s also Phil Bianchi, Cecil Witherspoon and Marty Doty.

Wilbur managers were clear that “they wanted standups and funny people but wasn’t just to be a comedy showcase,” and Reid said he’s included his guest stars in the on-the-fly collaboration so “it’s not quite as much just a me vision.”

It’s also hard to capture exactly what Member’s Lounge is, which makes it a plus that the Wilbur’s marketing power is behind a show that has hints of “The Daily Show with Jon Stewart,” “The Eric Andre Show” and “Comedy Bang Bang” without actually being much like them. That element of uncertainty appeals to Reid.

“It’ll be very of the moment. It’s not very rehearsed. I like that kind of engagement and I like designing a show you sort of have to be at live – you have to be in the audience, because you try to explain it to people after the fact and they would be like, ‘I don’t really understand what you mean,’” Reid said. “That’s the kind of stuff I look forward to.”

Members Lounge with Ken Reid starts at 8 p.m. Thursday at Johnny D’s, 17 Holland St., Davis Square, Somerville. The show is 21-plus and lasts for 75 to 90 minutes. Tickets are $15, or $20 after TicketMaster service fees.