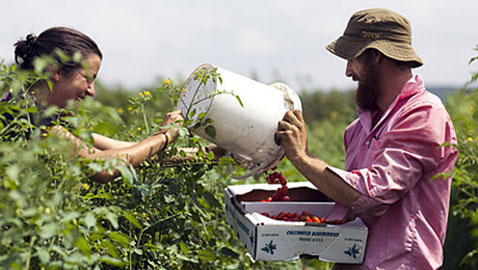 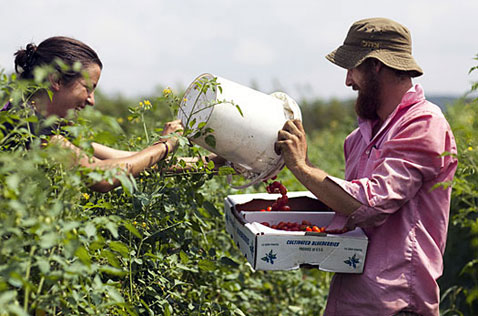 Granby’s Red Fire Farm is one of six Massachusetts farms in a Thursday CSA signup. The farm plans to drop off produce, flowers and fruits over the summer season. (Photo: Red Fire Farm)

Clover Food Lab is hosting CSA signups Thursday at its Inman Square location (and in Brookline), putting together locals who want to join a farmshare and reps from six Massachusetts farms.

The Meet the Farmer event runs from 6 to 8 p.m. and brings in the Red Fire, Next Barn Over, Enterprise, Queen’s Greens, Crimson & Clover and Stone Soup farms to explain their community-supported agriculture programs for the summer, said Lucia Jazayeri, the chain’s communications director. Share prices range from $190 for a fruit share to $715 for a large produce share paid upfront, and the farms use the money for the upcoming season.

Customers get just-harvested produce typically for each of 20 weeks from June to October, with Clover serving as the pickup spot. Its pickup hours are uniquely long, Jazayeri said in a press release – 3 p.m. to midnight, and Clover takes only a small advertising fee in return for running the program.

Last year resulted about 500 signups, and Clover wants to double that this year, Jazayeri said. It would mean about $500,000 for the six farms.

“I started talking to farmers a couple of years ago and discovered that farmshares are the best economic model for small farmers, as opposed to farmers markets, as I had originally thought,” said Ayr Muir, Clover founder’s and chief executive. “I started thinking about how we could use our restaurants to help farmers expand their farmshare offerings. We see thousands of customers every day, and we’re in a unique position to introduce folks to farmshares who may have never heard of them.”

In addition to being able to research and pick a farm, visitors at the Meet the Farmer event can win prizes, including gift certificates for summer cooking classes. Signups are also online here through May 15.