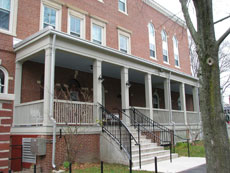 The Cambridge Housing Authority is beginning to prepare its residents for a new policy Aug. 1 banning smoking inside their homes and everywhere else in public housing developments except for designated smoking areas outdoors.

Officials began holding meetings with residents last month to discuss the ban and answer questions; more sessions will be held this month. A total of 12 are scheduled for tenants at all the authority’s low-income family and senior housing developments, which house more than 2,500 people.

Besides those meetings, smoking cessation workers from Cambridge Health Alliance will hold meetings at eight complexes this month and in June: four at senior housing developments and four at family complexes.

“We help residents learn about good strategies to comply [with the ban] and good strategies to quit smoking, as well as the resources available to them,” said Lisa Montuori-Trimble, director of health promotion and community outreach, who is supervising the program. Among those resources are medication and counseling, in many cases covered by MassHealth and private insurers, she said.

The Authority adopted the ban last September despite passionate opposition from some residents, many of whom attended authority meetings to protest. The tenant representative on the board, Victoria Bergland, voted no, saying the ban was too harsh and would hurt frail residents. Authority officials said, however, that a survey of residents showed a large majority favored a ban, with some saying their or their children’s health had been affected by smoke from other tenants’ cigarettes seeping into their apartments.

During discussions of the policy, officials said they and Cambridge Health Alliance employees would meet with with residents to help them deal with the ban. The task force of residents and managers that developed the policy recommended that the Authority also make quit-smoking counselors available to residents who wanted help.

Comer said the authority is working on finding counselors and hopes to hire some “in the next month or so” to work with residents at some developments. Residents expressed “positive interest” in using counselors at meetings that have been held so far, he said.

The task force said the smoking ban is needed to reduce the health effects of secondhand smoke. Authority officials also said the agency had to spend more to prepare apartments for rent if the former tenant was a smoker.

Although the ban takes effect Aug. 1, residents can bring it to their developments sooner if a majority of tenants at the complex vote for it. James Comer, director of operations, said tenants at 116 Norfolk St., a congregate housing building for elderly and disabled people, have asked for a vote, which is expected this month.

The ban exempts e-cigarettes, devices that produce vapor containing nicotine that can be inhaled and are becoming more and more popular, although their longterm effects on health are not known. When opponents of the ban complained that many residents, such as single parents, would find it difficult to go outside to smoke, officials said they could use e-cigarettes if necessary.

The U.S. Food and Drug Administration said last month that it intends to regulate e-cigarettes, including banning sales to people under 18. Some public health experts say they should be treated like cigarettes because of possible health risks; others say reducing the harm from cigarette smoke by allowing people to use e-cigarettes is more important than avoiding possible but unknown risks.

Last month the U.S. Centers for Disease Control and Prevention warned that e-cigarettes have begun presenting a new danger: accidental poisoning from the nicotine-laced liquid that produces vapor. The CDC said calls to regional poison centers relating to e-cigarette liquid had increased from one per month in September 2010 to 215 per month in February this year. A little over half the calls involved children under 5, the CDC said, and 42 percent involved people 20 and older.

Nicotine at high concentrations can cause severe injuries if it’s inhaled, ingested or gets on the skin.

Comer at the Housing Authority said he knew about the CDC report and that authority officials are keeping abreast of new information about e-cigarettes, as well as possible regulation by the city.

“As approved, the plan permits the use of e-cigarettes by residents, but we certainly have the right to amend the plan should we feel the danger posed by such devices is a significant risk to the health of our residents and our communities. As additional reliable health data about e-cigarettes emerges we will continue to monitor that information and assess policy in that light,” Comer said in an email.

Montuori-Trimble said health workers expected questions from residents about e-cigarettes and will tell them about the severe health risks of nicotine at high concentrations, often the case with the liquid used in e-cigarettes. Consumers can buy the liquid separately and fill the devices themselves, usually less expensive in the long run than buying an e-cigarette already filled.

Next story: Public housing smoking ban rolling out, with some acceptance, enforcement gaps