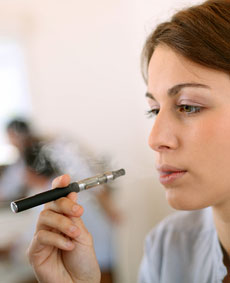 You’d expect that preventing youths under 18 from buying electronic cigarettes – the controversial devices that deliver nicotine-laced mist instead of smoke – would be a slam dunk in activist Cambridge. Yet a City Council proposal to do just that, introduced last July, vetted by the proper advisory committee and sent back to the Council last November to be enacted, remains in procedural limbo.

Meanwhile, at least 44 other Massachusetts cities and towns have already begun regulating the increasingly popular cigarette lookalikes, according to the Massachusetts Municipal Association.  The U.S. Food and Drug Administration said last month that it will develop e-cigarettes rules that include barring sales to minors, although observers familiar with the federal process said it could take at least two years.

E-cigarettes are cigarette-shaped cylinders that work by heating a liquid containing nicotine to produce vapor the user can inhale. (Some e-cigarette makers say their products don’t contain nicotine). Most health experts agree the vapor doesn’t hurt health as much as cigarette smoke, but many say there’s not enough evidence about long-term effects. Some studies have found small amounts of harmful chemicals in the liquid, whose constituents and manufacture are not regulated. The amounts of nicotine vary widely.

Recently, the U.S. Centers for Disease Control and Prevention identified another e-cigarette hazard: poisoning from the liquid that produces the vapor, which is often sold separately. High concentrations of nicotine can seriously injure people when ingested or put on the skin. The CDC said calls to poison control centers for exposure to e-cigarette liquid or vapor increased from one per month in September 2010 to 215 per month in February this year, and now accounted for almost 42 percent of total calls relating to cigarettes and e-cigarettes. About 51 percent of the e-cigarette poisonings involved young children, and developing a way to prevent poisonings is “critical,” the agency said.

Health care providers, the industry and the public “should be aware that e-cigarettes have the potential to cause acute adverse health effects and represent an emerging public health concern,”   the CDC said.

Many former smokers say they were able to stop smoking because they started using e-cigarettes, but the few studies are not conclusive and some public health officials say there’s no proof the devices are better than nicotine patches or gum – which aren’t very effective anyway. Health officials say an increasing number of youths and teenagers are using e-cigarettes, and some fault the makers for including flavoring attractive to kids in the liquid.

Although many officials have called e-cigarettes a “gateway” to cigarette smoking for young people, there is no conclusive proof the devices lead to smoking. Smoking cessation experts such as Lisa Montuori-Trimble, of the Cambridge Health Alliance, have said e-cigarette users could find it more difficult to stop smoking regular cigarettes because the vapor devices mimic cigarettes so well.

After councillors voted to consider Decker’s policy order nine months ago, it went to the Tobacco Advisory Committee, made up mostly of city officials, which reports to the city manager. The city manager also sits on the panel, so he is familiar with its conclusions, said Sam Lipson, director of environmental health for the city’s Public Health Department and staff member who serves the committee.

In a memo sent to Rossi on Nov. 21,  the committee said e-cigarettes posed “several public health concerns” and recommended that the city ban sales of e-cigarettes to minors. But the panel questioned including the devices in the rest of the city’s smoking ordinance. Current evidence indicates that e-cigarette vapor is less harmful than cigarette smoke, so “the rationale used in Cambridge and elsewhere to advocate for a ban on smoking in the workplace and other public places (i.e. risk to non-smokers) may not be applicable to this product [until] after more comprehensive exposure studies are carried out,” Chief Public Health Officer Claude-Alix Jacob wrote.

It didn’t take long for councillors to get the recommendations – they appeared on the Nov. 25, 2013, council agenda as a report from Rossi. Then, according to the city’s official record of the meeting, the matter was referred to the Ordinance Committee, which includes all nine councillors, for its Dec. 4 meeting. The committee reviews all proposed ordinances.

The councillors also got draft language for the changes from councillor Craig Kelley. It was on the agenda for the Council’s Dec. 2 meeting, two days before the councillors were to meet as the Ordinance Committee.

Despite the preparation, the changes were never considered by the committee Dec. 4 – or any time since then. The item listed on the committee agenda for that date was a proposal to restrict smoking in parks, another Decker policy order.

But even if the ban on selling e-cigarettes to minors had come before the committee Dec. 4, the committee didn’t have a quorum. It was adjourned with no actions taken.

Meanwhile, the Tobacco Advisory Committee promised to deliberate further on banning e-cigarettes in workplaces, restaurants and public places and send another report “early” this year, according to Jacob’s memorandum. Ini Tomeu, spokeswoman for the city administration, said the committee hasn’t made any more recommendations. Asked what was holding up action, she said in an email: “The city is still reviewing the recommendations from the Tobacco Advisory Committee and meeting a few more times on it before forwarding them to the City Council in the near future.”

Asked who in “the city” was meeting to review the Tobacco Advisory Committee recommendations, she said it was actually the Tobacco Advisory Committee, apparently reconsidering its November memo. Twenty of the 25 committee members are from city agencies, including the City Manager’s Office, Public Health Department, Community Development Department, Inspectional Services Department, Office of Tourism, School Department and Police Department; one from Somerville; one from the Cambridge Housing Authority; one from the Massachusetts Institute of Technology; and two from Harvard University.

The committee’s meetings are secret and its recommendations aren’t public until they are sent to councillors, Lipson said.

Lipson didn’t mention that a report had gone to the council last November and was therefore public. A Boston University public health professor who often but not always supports e-cigarettes, Dr. Michael Siegel, picked up an online copy of the report and put it on his blog. Siegel criticized Cambridge officials for claiming there was evidence that e-cigarettes introduced young people to cigarettes.

“The only study to examine this hypothesis found that electronic cigarettes are not currently serving as a gateway to cigarette smoking among young people,” Siegel wrote.

Still, Siegel said he supports banning sales to minors. “It’s really not what [e-cigarettes] are intended for,” he said by phone. Siegel also agreed that there’s isn’t evidence of harm to bystanders that would support a restaurant ban, but he supported keeping e-cigarettes out of workplaces. “There are other reasons” why the devices don’t belong in a place where people work, he said.

Siegel said “there is no question” that using e-cigarettes helps people stop smoking. But studies have come to conflicting conclusions and many aren’t comparable because they included different populations or examined different measures of smoking cessation.