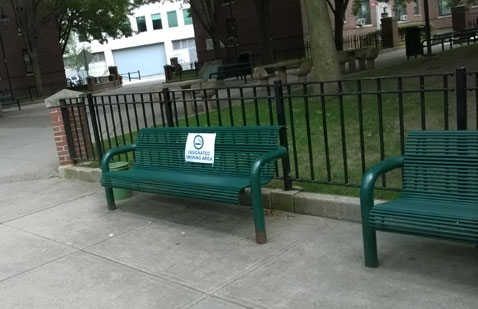 Smoking areas have been set up at nine Cambridge Housing Authority sites, including this one at Newtowne Court.(Photo: Sue Reinert)

A no-smoking policy for public housing tenants has gone quietly into effect, a Cambridge Housing Authority official said this week, after months of vehement protests from residents before the rules were adopted in September.

The change bars tenants of the authority’s 2,700 low-income public housing units from smoking inside their homes, buildings and anywhere onsite except in designated smoking areas. The purpose is to prevent “secondhand smoke” and its unhealthy effects, as well as reduce the cost of cleaning up units vacated by smokers.

It’s been two weeks since the Aug. 1 effective date, and “so far we haven’t received an enormous amount of pushback,” operations director James Comer said Thursday. After information meetings held at most developments, “there’s not a lot of confusion about the policy,” he said.

In conversations at designated smoking sites at two elderly housing developments Friday, smokers expressed a surprisingly tolerant view of the rules, given the vocal opposition. “I think all in all, people shouldn’t be smoking in their apartments,’ said Joe Batista, standing with three other smokers in the courtyard of the LBJ Apartments on Erie Street.

“My cat is really happy” not to have smoke in the apartment, said his wife, Susan. Denise Lecher said that she noticed the impact in the halls. “Before, I would walk down the hallway, and my god, how can these non-smokers stand it?” Lecher said.

At Manning Apartments on Franklin Street, James McCambridge sat alone at a table that bore a sand-filled container full of cigarette butts. He was not smoking; he said he smokes only one cigarette a day, usually late at night before he goes to bed. “I get a bit of euphoria,” McCambridge said.

The ban “has done wonders for our social life,” he said. “People meet out here.”

There was some resentment despite the acceptance. “We’re being discriminated against now,” said Karen Burke at the LBJ development. “We are now living by rules that the non-smokers are asking the government to enforce.” Echoing a theme of the protesters, Burke said: “Why can’t they have a nicely vented room for smokers?”

While acceptance may have smoothed the transition at the elderly developments, lack of enforcement might be playing a role at a family site, Newtowne Court on Main Street near Central Square.

There, the designated smoking area was empty at 2:45 pm. The benches for smokers faced a courtyard with areas marked for hopscotch and other children’s games. It wasn’t apparent whether children use the space.

But around the corner on Main Street, a woman sat on a plastic chair near the entrance to a building, smoking a cigarette. The policy calls for any designated smoking area to be at least 25 feet from windows and doors.

A young man sitting in another part of the development, who said he lives in Willow Street Homes, another family public housing site, said he follows his own rule. “I’ll still smoke if I have to,” he said, but “I don’t smoke around kids.” He was not smoking; there were no children around.

Comer said he has “not heard that there have been violations” but “that doesn’t mean [a development manager] hasn’t had a conversation with someone.” Under the rule, repeated violations can lead to eviction.

The change “is a big transition for people. We’re trying to be as sensitive as possible,” Comer said.

Comer also said there won’t be designated smoking sites in every development. Some don’t have enough space or an adequate configuration, he said. So far, there are smoking-allowed spaces in nine sites, Comer said.

In May, community health workers from the Cambridge Health Alliance held meetings at eight developments, four elderly and four family, to inform residents about the health risks of smoking and of strategies and resources to stop.

The contract, approved last month, calls for six weekly group counseling sessions at up to 10 developments, as well as “drop-in” hours for individuals three times a week at various locations. The groups could be repeated another two times.

The groups will probably start next month at the Manning Apartments and be scheduled at other locations depending on demand, Comer said.

The smokers at LBJ Apartments said they would like to stop but couldn’t. “We’ve got the [nicotine] patches. We’re just not ready to quit,” Susan Batista said.

McCambridge at Manning Apartments said he cut down a few years ago from six cigarettes a day to one when he noticed that he was getting out of breath while bicycling. He won’t give up that one cigarette, he said. “I enjoy it.”