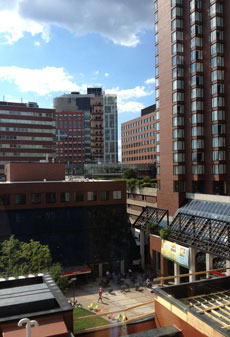 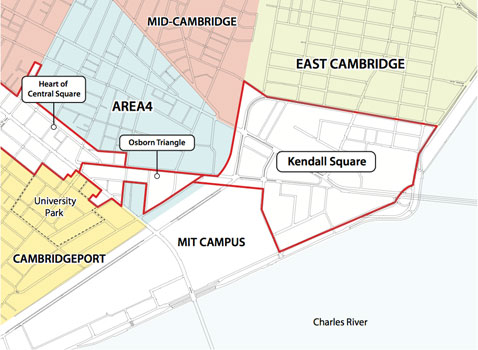 Although a single date has been posted as of late May, community meetings to help shape a new citywide development master plan are expected throughout June, along with a roundtable meeting of the City Council and Planning Board – gatherings taking place against a backdrop of debate about upzoning moratoriums, an onrush of development in the Alewife area and the fate of the so-called K2C2 recommendations.

Debate about those recommendations for Kendall Square and Central Square may be unnecessary, based on comments last month from Brian Murphy, assistant city manager and head of the Community Development Department.

“I’m sorry there’s not” a tidy answer on the timing of their adoption, Murphy said April 14 after a Cambridge Redevelopment Authority meeting. But he saw approval as under way, and their outcomes as essentially already in use.

Some have worried that the master plan process would “scrap” K2C2 or about how to fold its work into the larger undertaking. To Murphy, neither concern played a role in his answers.

“You got final committee reports, that part is done,” he said, referring to Kendall and Central documents released by Community Development in December. “There’s still zoning to be done, and it’ll be done in phases. Timing for some of it is still somewhat evolving … when the next phase of zoning goes to the Planning Board and then goes to the council is still a work in progress.”

But he identified the 26-acre East Campus Gateway project in Kendall, referred to also as PUD-5 before its April 8, 2013, vote, as “really the first zoning that really by and large followed the K2 recommendations, albeit with some minor adjustments and tweaks in terms of what the distribution was of community benefits.”

“The difference between the K2 recommendations and what the council adopted were quite minor,” Murphy said.

The re-envisioning of Kendall and Central squares and resulting zoning and design recommendations date back to 2011, at least as led by $350,000 consultant Goody Clancy, but the Central Square process actually began in August 2010 with the Red Ribbon Commission on the Delights & Concerns of Central Square, led by then city councillor Ken Reeves.

The Community Development website marks a May 9, 2011, presentation by Goody Clancy as early in the process, and its timeline follows a dozen more key dates through two Planning Board discussions on draft zoning proposals for Central Square in May and June 2013 and, finally, a March 14 memo from CDD to the board and Cambridge Redevelopment Authority “to provide an update on the status of the Kendall Square study recommendations, and to begin discussing the next phases of implementation.”

Murphy cited three key issues as getting ongoing or renewed attention for how they could affect the recommendations: incentives for builders that would ensure more middle-class housing gets built in the squares; the future of the 7.5-acre John A. Volpe National Transportation Systems Center site, where Goody Clancy counts on federal offices shrinking to a fraction of their current size to make room for development and a park; and the Mixed Use Development District or MXD that the council created to add more retail and housing to a lab- and office-focused Kendall Square.

“Momentum may have slowed”

When the developer Boston Properties began plans for an apartment tower on Ames Street in the MXD, members of the Cambridge Redevelopment Authority urged company representatives to build up to 300 feet instead of the planned 250 feet. But the company declined, fearing controversy over height might slow down the project.

In Murphy’s view, it was a warning of the need for more work on the middle-class housing incentives, and Twining Properties’ bid to build a project called Mass+Main in Central Square had a similar effect: After the company proposed that slender residential towers at two key Central Square intersections might be allowed to go as high as 285 feet, “with C2, some of the momentum may have slowed a little bit,” Murphy said.

“So we’re not done, and it’s taking longer than I think most of us would like in terms of the zoning piece,” Murphy said, “but … I don’t expect major changes for the K2 or C2 recommendations.”

He also called the process of issuing final reports in December and saying “zoning would come out incrementally” after that to be “probably not that dissimilar than some of what happened with citywide ECAPS,” a reference to the Eastern Cambridge Planning Study of 1999-2001. But the timeline for the project, as described on the website of Murphy’s department, looks – at least in retrospect – far simpler:

On June 18, 2001, the Planning Board submitted the Eastern Cambridge Rezoning Petition to the City Council. This petition derived from the zoning proposals developed by the committee and forwarded to the Planning Board in April 2001. Zoning changes based on these recommendations were adopted in October 2001.

ECAPS, which also involved Goody Clancy, began with an 18-month moratorium on commercial development over 20,000 square feet or 20 units in part of the neighborhood. From the filing of the residents’ Larkin petition to council adoption was about two years, while K2C2 has passed the three-year mark with no clear end date – or much clarity at all.

Before their April 28 master plan vote, city councillors got roughly 100 letters and emails from residents, many alarmed by “explosive growth” in Alewife that they saw as “haphazard,” done “without a coherent plan” and “without forethought and planning.” (The sole planning meeting scheduled is in councillor Dennis Carlone’s Transportation and Public Utilities Committee on June 19, looking at traffic, transportation and access to transit in the area “with a view toward understanding the impact of recent development trends in the area.”)

There were also some letters and emails about K2C2, some asking that the recommendations be taken up and adopted and others referring to the “recently completed” process.

Even councillors have expressed confusion over the state of the recommendations – among them Reeves, who launched his Central Square committee three years and three months before losing reelection in November without seeing his labors transformed into law.