MIT gets its zoning to remake Kendall Square (updated) 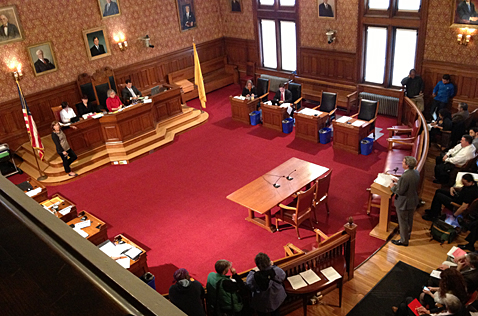 MIT gets its zoning to remake Kendall Square (updated)

Greg Bialecki, secretary of Housing and Economic Development for the state, speaks Monday in favor of a plan to remake Kendall Square. (Photo: Marc Levy)

The zoning, referred to as MIT PUD-5, was passed 7-2, with councillor Minka vanBeuzekom opposed and Denise Simmons voting “present.” A letter of commitment from the institute, with various sweeteners proposed last week, passed unanimously.

The votes marked a win for the university in a process that started officially in the spring of 2011, and forced councillors to face a contradiction: While David Maher was pointing out “this petition by no stretch of the imagination was rushed,” and the clock was nearing 11 p.m., three other councillors were introducing a flurry of literally last-minute amendments.

“We’ve just heard how many years we’ve been talking about this. This isn’t when we should be having these discussions. We should have had them long, long, long ago,” Craig Kelley said. “And to start throwing stuff in at this late date is going to make all those people who came here skeptical of the process even more skeptical, and it’s going to be tough for me not to agree with them.”

“Someone said this petition has been going on for two years, but actually we can well see it’s the last few weeks that have surfaced more concessions and more concerns for neighborhoods than we’ve seen for the last two years, and for me that’s a beginning process, not an ending process,” resident Kathy Hoffman said.

The final act of the years-long zoning debate, starting at about 5:45 p.m., had itself been long: The vote came after more than four and a half hours of meeting – with public comment by some 70 residents, university officials, business and union representatives and Kendall Square entrepreneurs taking up the first three hours – and two recesses, with councillors delaying to give councillors Marjorie Decker and Tim Toomey time to arrive. As state representatives, Decker and Toomey spent much of the night at the State House for debate and votes on a major transportation bill that could bring the state more than $500 million a year in new tax revenues.

At 10:08 p.m., Decker and Toomey arrived, with Mayor Henrietta Davis alerting other councillors that the state reps had only a brief window in which they could vote on the city zoning.

She cut off councillor Leland Cheung to do so, forcing him to switch from a filibuster-quality speech in favor of the petition to rushing through proposing amendments to it. His amendment to give the university more incentive for startup-business “innovation space” passed 5-4; bumping a 300-foot tower with housing up to a proposed 350 feet failed 4-5. Councillor Minka vanBeuzekom had amendments trying to cut the amount of noise allowed in the new zoning, which failed 4-5; and to compel the new buildings to be “net zero” on energy use through the purchase of renewable energy credits, which passed 5-3.

There had been criticisms that the university, while innovating overseas in geothermal and solar energy systems that could help save the Earth from disastrous climate change, wasn’t making the same effort for its own campus. A “net zero” agreement would have made up for that, vanBeuzekom said.

But Davis later changed her vote to “present,” causing the energy amendment to fail. Davis said she feared the amendment would result in “taking this project down.”

VanBeuzekom took that to mean that the official on hand to sign the letter of commitment for MIT didn’t have the power to accept such a sweeping amendment, and that his inability to sign would have pushed the petition into expiration.

Davis had another take: “We’d heard via the grapevine that MIT just couldn’t support [net zero]. They don’t really understand what that means, that’s what Steve just said to me, that they don’t understand the implications and it would put them too much at risk without knowing. I think in fact they’d be okay, but if it would cause them to withdraw the letter I didn’t want to vote that way,” the mayor said, referring to Steve Marsh, managing director of real estate with the MIT Investment Management Co.

An amendment by Decker to have $10 million in community benefits not be constrained by the so-called K2C2 rules, which haven’t been passed, was approved 5-4.

It wasn’t just amendments by councillors tilting the action toward Monday. A month ago, a deadline on the vote was set at April 23 or April 24, depending whether you asked the council or Planning Board; that changed March 18, when Maher and Davis announced that it was the opinion of the Law Department that the expiration was a week earlier.

The petition saw 14 changes in early March and another dozen or so changes this month, some in direct response to councillors’ demands for action in trade for a possible vote in favor. The clearest illustration of the university’s willingness to deal was in what’s happening with a vacant lot at 35 Cherry St. in Area IV. A livid Simmons demanded action on it at a March 22 roundtable, blasting MIT for doing nothing with it for years and yet refusing to let the neighborhood use it; the school agreed a week later to hand it over to the city for development, ostensibly as affordable housing.

Resident Gerald Bergman referred to such demands as “air fresheners to provide cover for this destructive upzoning” and scoffed at the turnaround on the Cherry Street lot in particular. “For years as an Area IV resident I was working on the Cherry Street lot that MIT was land-banking, and they wouldn’t give us the time of day,” he said. “Now we know what kind of bribe it takes from MIT to secure that land. They want land for votes. This is what happens when Cambridge becomes a company town for the universities and biotech corporations.”

Ultimately, of course, Simmons didn’t vote for the rezoning in Kendall Square, possibly because as an Area IV resident she was sympathetic to what residents described as the university’s indifferent approach to working with the neighborhood that will be most affected by Kendall Square’s development. In addition to Bergman’s bitter comments, there were complaints from residents such as Julian Cassa and Renae Gray.

“Why is it the community that is the most impacted has had the least voice? I don’t think anyone from MIT has come to an Area IV meeting to talk to us about the plans,” Gray said.

Public comment was roughly balanced between pro and con, with the crowd in favor of approving the zoning tilted heavily toward university representatives, spokesmen for unions (five) and officials from the Kendall Square Association (three). Also speaking in favor: Greg Bialecki, secretary of Housing and Economic Development for the state, who asked that the council “allow this great city to continue to grow.” As Bialecki said:

Massachusetts’ innovation economy is on a roll, and nowhere is that more evident than here in Cambridge … but over the next decade we will also face a tremendous challenge. Until quite recently, it was never really questioned that we were the dominant innovation economy [at least] on the East Coast. That unquestioned dominance is now over. That is not to say the fight is over. Indeed, it has just begun … there is one thing we will certainly need to do, and that is to dramatically grow the intensity and density and scale of the innovation activity that is happening here.

Although Kendall Square is the “envy of the world,” Bialecki said, “we will regret it for a long time” if development such as what MIT proposed wasn’t pursued and approved.

The crowd opposed to the zoning had distinctly local reasons for fearing the results, including the continuing trend of low- and middle-class residents being forced out by constantly rising property values and graduate students without appealing, lower-priced campus housing. There was also worry that the Kendall zoning set a precedent that would continue down Main Street to Central Square, ultimately transforming the entire city.

As a result, elections that are eight months away began to look much closer Monday as resident after resident reminded councillors of what they saw as their “moral obligation,” as Bergman and Gray put it, to look out for them over “corporate profits”; that the people who are “really upset” are the longtime residents and most faithful voters, as Carolyn Shipley did; or that they might be losing the support of people who campaigned for them as well as voted for them, as Dave Slaney did.

Marsh, of MIT’s development arm, had some slight comfort for the residents. The university’s first move would be to get the permitting on creating apartments at 1 Broadway, which is to be called Innovation Landing, he said, and assured them during public comment that “as we move forward, public input and participation will continue to be a priority.”

This story was updated April 9, 2013, with more details, context and comments.