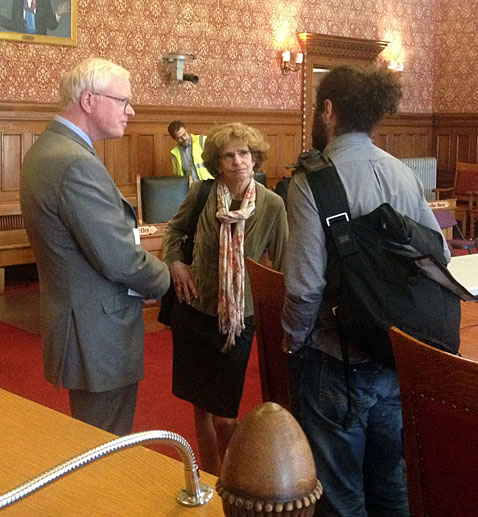 Responding to a plea for a slow, perhaps yearlong transition away from a dedicated psychiatric emergency room at Cambridge Health Alliance, instead of a sudden shutdown, Chief Executive Patrick Wardell told city councillor Marc McGovern he wanted to “take it under advisement.”

More than an hour later, Wardell mentioned to councillors and others gathered at a Thursday roundtable with the City Council that the closing of the psychiatric ER was already scheduled – for Wednesday.

“It has never been our intention to hold off on this,” Wardell said. “This was an important decision and one that we felt was important to bring to the public’s attention, but is an internal decision.”

Wardell said McGovern’s comments, such as about a studied transition from specialist nurses to general emergency room nurses, were relevant despite the sudden implementation, even though McGovern, a social worker with extensive experience with the psychiatric ER, said he’d just talked with a nurse who confided in him that “I’m not sure we’re ready.”

No triage to psychiatric ER

The health system’s non-psychiatric emergency rooms already handle about half of the psychiatric patients that would come in for emergency treatment, or about 2,500 people a year, said Wardell and Cambridge Health Alliance’s chief medical officer, Dr. Assaad Sayah – in part because, despite having a psychiatric ER and staff trained specifically to handle psychiatric emergencies, the hospital wasn’t doing triage to redirect patients to it.

With the closing of the psychiatric ER, none of the medical staff assigned to it will be switched to the emergency room that survives, but every worker was offered full or part-time work elsewhere in the Alliance, mainly in mental health areas, Wardell said. Meanwhile, two of the medical ER’s 22 rooms, most of which are private, have been converted to “safe rooms” like those in the psychiatric ER.

Still, mental health remains a focus for the Alliance, which is competitive even with Belmont’s McLean Hospital in the number of beds for psychiatric patients in the region, he said.

Planned for years, footnoted in March

Read more about the plan here and here.

Councillor Nadeem Mazen, who was in conversation with Wardell at that point in the roundtable, elicited the admission of the Wednesday closing during a series of challenging questions about the intent and need for the cuts, which the Alliance estimates will save $1 million at a time the Cambridge, Somerville and Everett health system is running $28.1 million in the red. (At the meeting, Wardell mentioned a “whopping loss in the area of $26 million.”) He returned to the tough line of questions and comments after Wardell explained the timeline for the decision to close the ward.

“We first talked to the council back in March … and we expressed at that point we were either finalizing our decision or had made a decision,” Wardell said. “So we have been working since March to prepare to implement, and we are prepared to implement Wednesday.”

But Mazen said that when Alliance officials met with councillors and other officials in March, the closing of the psychiatric ER was “literally a footnote.”

I’m looking back at my notes from that day’s meeting and the closure or merger of the psych ER is literally a footnote in that conversation. There’s a tiny corner where I said at the end of the conversation, ‘Asterisk: What does this mean?’ So if the idea was to use that meeting as a way to alert us to the vast implications this would have for a huge number of patients, on the face of it that’s not the approach.

Referring to that March meeting that downplayed the ER closing, Councillor Leland Cheung asked the officials why they “waste the time meeting with us if you’re not going to tell us something so important to the community?”

Plea to work together

With more warning, councillors said, the Alliance and city could lobby together for the health system’s needs and avoid such cuts, but councillor Craig Kelley called this just the latest “abject failure” to include the council – and warned that the current approach could make it harder to win council support some day for bonding.

Mazen agreed the Alliance could benefit from changing its approach.

“I would love to be engaged in the future with not a drop-dead ‘We decided this, we’re in service-reduction mode’ but “We have two years to do this and this is what’s at stake and we’re being treated unfairly in these ways’ and you have a whole community and a whole council and a whole set of stakeholders who have your back, rather than being in conflict,” Mazen said.

In addition to Wardell saying the Alliance was working on forming a patient-family council to advise on future treatment issues, City Manager Richard C. Rossi suggested its executives give quarterly briefings to the council, especially since more difficult financial decisions were expected “as the noose gets tighter.”

Wardell gave an apology of sorts to the council, saying “If there’s been any missteps on our part on our way through this, I’m sorry that happened.” But the comment came attached to his assertion that he’d alerted the council in March to the ER closing.