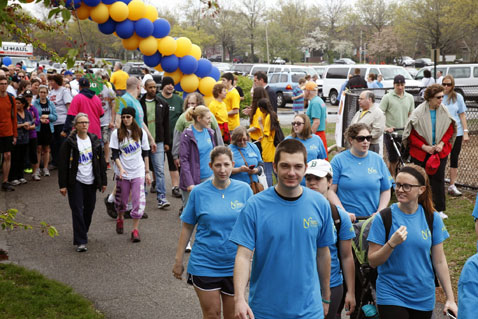 Thousands took part in the May NAMIWalk, a fundraiser of the state chapter of the National Alliance on Mental Illness that is working on a Patient and Family Advisory Council with Cambridge Health Alliance. (Photo: Carrolle Photography and David Fox Photographers)

After changing how it provides emergency services to psychiatric patients despite opposition from advocates, medical staff and family members of patients, Cambridge Health Alliance officials want to add representatives of mental health clients to an advisory board that includes patients and their families.

The Alliance “is actively working” with leaders of the local chapter of the National Alliance on Mental Illness to bring people representing psychiatric patients onto its Patient and Family Advisory Council, spokesman David Cecere said last week.

The advisory council now includes about 10 patients and family members “who are interested in helping us improve our services” and “give feedback on various issues and projects underway at CHA,” Cecere said. “We are working to enhance the council’s role and build up its membership,” including adding members from NAMI and having the council “play a role on other committees.”

Leaders of the Middlesex/Cambridge chapter of NAMI couldn’t be reached.

End of an ER

On June 4 the health care system eliminated its separate emergency service for psychiatric patients at Cambridge Hospital and began treating them in its medical emergency department. Before the change, opponents said it would endanger patients and staff; one psychiatrist resigned in protest. City councillors questioned the need for and speed of the merger, but hospital officials said the merger would improve care.

The merger eliminated the jobs of all five psychiatric nurses. The Alliance, which expects to lose about $28 million this year, said the change would save $1 million a year.

Ellen Semonoff, chairwoman of the health care system’s board of trustees and assistant city manager for human services, said she met with local officials of NAMI after the new policy was implemented. “They were concerned about the changes” in emergency services but “it was a very positive meeting,” Semonoff said at a June 17 trustees meeting.

“They want to be helpful as CHA addresses strategic issues,” she said. Alliance Chief Executive Patrick Wardell, who also met with leaders of the group, said most of the current members of the Patient and Family Advisory Council represent medical and surgical patients.

Treated half of region’s total

People with bipolar disorder were the second-largest category of patients admitted to an Alliance hospital bed, coming after mothers delivering babies. Six of the top 10 diagnoses for inpatients at the health care system were for mental illnesses and alcoholism.

In contrast, none of the top 10 diagnoses at Cambridge’s other hospital, Mount Auburn Hospital, were for mental illness or alcoholism.

In the first two weeks after the change in psychiatric emergency services, all patients, medical and psychiatric, generally spent slightly more time in the emergency room, Chief Medical Officer Dr. Assaad Sayah told trustees. The median length of stay – the point at which half of patients spent less time and half spent more time – rose from 117 minutes before the change to 126 minutes afterward.

Next story: As psychiatric emergency room merged with other ER, patient stays lengthened