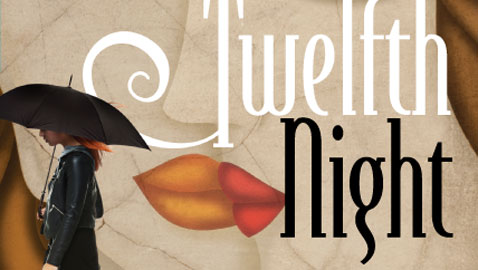 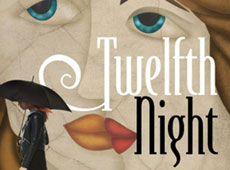 A detail of the program art from this year’s Commonwealth Shakespeare Co. production in Boston.

Shakespeare’s cross-dressing comedy “Twelfth Night” is the free offering on Boston Common through Aug. 10, a 20th anniversary gift of the Commonwealth Shakespeare Co. Should a Cambervillian cross the river to see it?

Well, sure, why not? Unless that person burned out totally on open-air Shakespeare for the year with the It’s A Fiasco production of “A Midsummer Night’s Dream” last month in Danehy Park or with the offerings at April’s Seventh Annual Bookish Ball and Shakespeare’s Birthday Celebration – or burned out on “Twelfth Night” itself, which was just performed in March by the MIT Shakespeare Ensemble.

The current “Twelfth Night” is a perfectly pleasant way to lounge on Boston’s lawn, especially for free. (Or ideally a $10 donation per person.) But it has a couple of smallish problems, and even though the company didn’t bring all the problems on itself, it could have handled them better.

If the phrase “Shakespeare’s cross-dressing comedy” didn’t immediately suggest the title “Twelfth Night,” that’s hardly surprising. Describing a Shakespeare comedy as the one with the lovers who cross-dress is like trying to explain which episode of “Three’s Company” had Jack Tripper nearly revealing his true sexual orientation to landlord Mr. Roper – which is to say, pretty much all of them, and it’s a trope by now just as anachronistic as the conflicts in Shakespeare comedies.

Directors often return meaning to the plays by identifying how themes Shakespeare sounded in the 1600s resound in modern life, delivering the message by updating sets, costumes, texts and the details of staging. Ethan Hawke’s “Hamlet” in 2000 was a film student who sees his father’s ghost on closed-circuit TV and delivers his “to be or not to be” soliloquy wandering around a Blockbuster Video; in Baz Luhrman’s “Romeo + Juliet,” the factions are basically warring crime families toting guns around Miami.

And in “Twelfth Night” as directed by the Commonwealth Shakespeare Co.’s longtime artistic director Steven Maler? Who knows? The costumes are a mishmash of eras suggestive of everything from Shakespeare’s own times to the 1920s and 1940s, and the backdrop for the action is a two-dimensional, two-story swirl of pen and ink, like scenic designer Cristina Todesco brought a doodle from a particularly long phone conversation to Kinkos and had it blown up 1,000 times its original size. It’s easy to spend the first third or so of the play trying to figure out what it all means before realizing: It likely means there’s less money to go around these days, and an abstract backdrop stretches donor dollars farther than a set that specifies a time and place (although not 1,000 times farther) such as the North End of the 1950s the director had made for “Taming of the Shrew” several years ago. 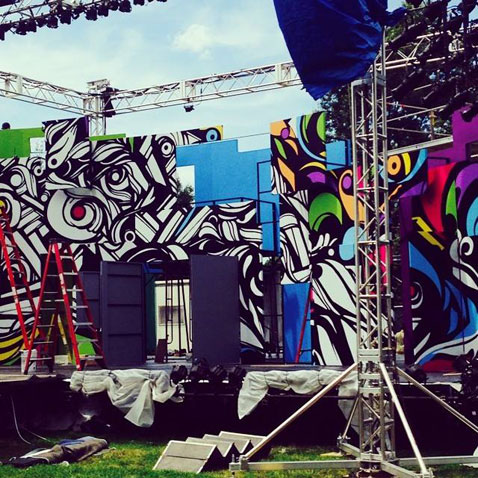 (Read Todesco’s explanation of the set here from a profile by Chris Harding in the Dorchester Reporter.)

If that sounds disappointing, of course it is. Even more so if you get a look at the cover of this year’s program, which shows an unmistakably contemporary woman in black leather, tights and tough high-heeled boots tucked mysteriously under an umbrella – pretty much the only feature you can make out is that she has unnaturally bright red hair – in front of a similarly unmistakably abstract backdrop suggesting a single face formed of two people standing lip to lip.

Where is the play represented by that program cover? It looks great.

If the company couldn’t deliver that with current funding, it might have been better to go with even less. Just some scaffolding and scrim, maybe lit by rear projections, would let audiences focus on the actors and action without wasting energy wondering whether the giant doodle plays a role as well. (Actually, it does: There’s a nice bit of physical comedy in Act II that uses the backdrop, but it smacks of a gag thought up after the backdrop was installed.) Saving money on the backdrop might have allowed finally for raising the set higher off the grass; it’s hard to see the action over the heads of fellow lawn-dwellers, and that’s a complaint familiar at least back to that “Taming of the Shrew” in 2006.

Instead, the set just adds another note of confusion to the affair, revealing a futuristic or nightclub-worthy bank of red lights every time a certain door is opened. Wherever we are, people dressed like Robin Hood sometimes exit a cartoon through a door to “2001: A Space Odyssey.”

There’s one way that giant doodle of a set is appropriate and the evocative program cover isn’t, and that’s as a signifier that what audiences are watching is a swirl of brightness and colors. The putative leads such as Duke Orsino (Robert Najarian) and Sebastian (Nile Hawver) are dull, and Viola (Marianna Bassham) isn’t far behind – a criticism for Shakespeare, not the actors – but Maler’s “Twelfth Night” excels at the comedy of Sir Toby Belch (Robert Pemberton), Feste (Remo Airaldi) and Sir Andrew Aguecheek (Conner Christiansen, trying to outdo Sean Hayes) and, when it comes time, even of Malvolio (Fred Sullivan Jr.) and to a lesser extent Olivia (Kerry O’Malley). Fortunately there’s plenty of it, but in a final sign of this production’s confused nature, the final bows keep presenting the romantic leads as stars when it’s the buffoons who outshine them.

“Twelfth Night” is free on the Boston Common from 8 to 11 p.m. every day until Aug. 10. (Sunday performances start at 7 p.m.) Find the stage roughly central in the Common, by the Parkman Bandstand, tennis courts and Earl of Sandwich sandwich shop.