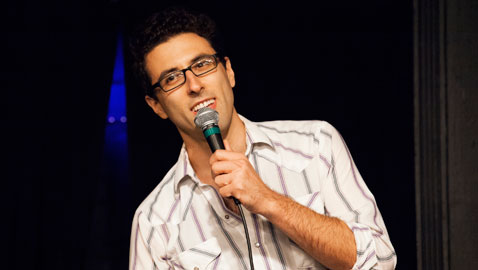 It’s hurts to contemplate, but maybe leaving for New York or Los Angeles is the smartest thing a Boston comedian can do.

And that can be said only because two of the smartest comedians you’ll ever see did just that – but are returning together for a Monday show at Central Square’s ImprovBoston comedy club.

Despite his New York base, Myq Kaplan may be no stranger to local comedy fans. In addition to regular visits at venues around town, he recorded an album in December 2011 at ImprovBoston with yet another formerly local comedian, Micah Sherman, and was back in April 2013 to film a one-hour comedy special at Boston’s Wilbur Theatre.

Kaplan specializes in desert-dry sardonic wit, and much of his shtick is explaining his alternative lifestyle choices – that is, veganism, childlessness and rationality – to a country that wants him to be fatter and act out more. In addition to appearances with Conan O’Brien, Craig Ferguson and David Letterman, he was a finalist on “Last Comic Standing,” has his own “Comedy Central Presents” special and two solo comedy albums.

Sherwin may be less familiar not just because he visits less, or less prominently, but because it wasn’t so long ago that he performed under another name and slightly different persona: MC Mr. Napkins, a rapper with a lot of hair.

Sherwin’s comedy is less cutting than Kaplan’s, but just as sharp, and his wordplay is as dazzling as any rapper’s but applied to topics you’d hardly expect Lil Wayne, Eminem or Childish Gambino to take on, including such various concerns as flag critiques, an explanation of the Israeli martial art Krav Maga and everyone’s favorite medical instrument, the sphygmomanometer.

Sherwin has dropped his rhyming wisdom on “The Pete Holmes Show,” “Totally Biased with W. Kamau Bell” and in the popular Web series “Epic Rap Battles of History” and has appeared on MTV, E!, and VH1.

Their tour together promises a night of the smartest comedy you may ever see.

Nick Ortolani, winner of The People’s Battle: ImprovBoston’s inaugural StandUp Tournament, opens the show, which is at 7:30 p.m. Monday at ImprovBoston, 40 Prospect St., Central Square. Tickets are $15 online, or $20 at the door.