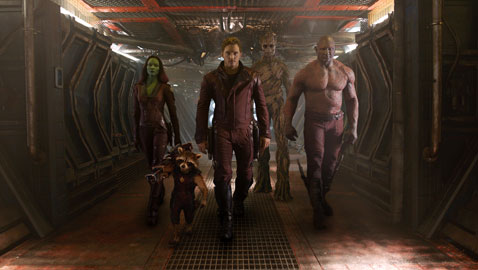 Finally a summer blockbuster worth our dime and our time. Okay, “The Edge of Tomorrow” and “Lucy” weren’t bad, but “Guardians of the Galaxy” is full of what made movies fun back when “Jaws” and “Star Wars” were igniting the genre. It also may be, or at least is to date, the best Marvel comic to make it to the big screen.Yup, better than “The Avengers” and, get this, it even takes place in the same universe/time continuum as “The Avengers” – there’s a series of mystical artifacts (infinity stones that can collectively give the one who holds them the power to rule the stars and beyond) that are spread throughout the various franchises. 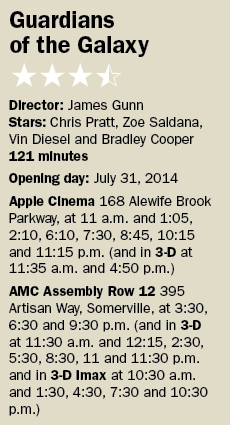 What to know: After losing his mother to cancer in the ’80s, Peter Quill (Chris Pratt of “Parks and Recreation”) is abducted by a spaceship. Flash forward a quarter-century to a galaxy far away in another universe, or something like that, and Quill is a treasure hunter seeking out high-risk items à la Indiana Jones, with the attitude to boot. Smugly he goes by the moniker Star-Lord as if he were Banksy, though no one knows who he is – that is, until he recovers an orb with some of the empowering infinity stones in it and everyone, including the evil Ronan (a cloaked and face-painted Lee Pace from “Halt and Catch Fire” ) and his overlord Thanos (voiced by Josh Brolin), want him and the orb.

As a result of all this cliché mumbo-jumbo (which would apply to “Star Wars” too, if you think about it), Zoe Saldana crops up as a green-skinned alien named Gamora who’s in the service of Ronan but bears a hidden agenda, and the voices of Bradley Cooper and Vin Diesel as a mutant talking raccoon (Rocket) and a brutish veggie stalk (think of a beer-swilling ent) who goes by the name of Groot (and says only “I am Groot”). The pair are bounty hunters after Quill too, but ultimately they, Gamora and a hulking humanoid named Drax the Destroyer (pro wrestler Dave Bautista) who takes everything literally – a trait that gets some punny good play – band together during a deep space prison riot to stop Ronan and his maniacal “Death Star” quest.

What makes “Guardians” such a grand summertime treat is the cheeky nuance imbued into the script by Nicole Perlman and director James Gunn, whose other most notable film was the sly horror flick “Slither.” They’re loyal to the comic book params, but play it loose with pop and sass. Just about every one of Groot’s leafy interactions has a payoff, and Pratt delivers an A-game hunky dork. His Quill rides cocksure through the film the way Harrison Ford’s incarnations did back as the ’70s melted into the ’80s. It’s a stellar hoot to see Quill’s confidence in his grand schemes give way to folly during moments of reckoning, not to mention that he cruises the galaxy tethered to an old-school Walkman soaking up ’70s and ’80s hits such as “If You Like Piña Coladas,” “More than a Feeling” and “Cherry Bomb.” It may sound like string cheese on paper, but up there in the stars where lasers blast and ships collide, it’s pure poetry.