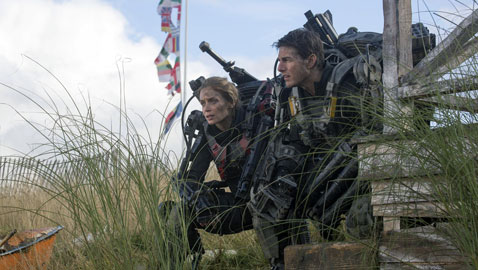 Say what you will about Tom Cruise the human, but up on screen the guy is a bona fide movie star. No question, no debate. Go back to “Risky Business,” “Top Gun” or “Rain Man” and the seeds of it were always there, and let’s not forget too that the man has cast flashes of thespian brilliance. I’ll cite “Magnolia” and “Born on the Fourth of July” and throw in “Tropic Thunder,” not only because his performance was so outright hilarious and poetically self-deprecating, but was also a gonzo reach that required balls. Thomas Cruise Mapother IV has done it all, lost it with Shelly Long and raised and reshaped the “Mission Impossible” TV series into a box office ringing machine marching into its fifth campaign and now hanging tight in the sci-fi genre. It’s not a new thing, mind you – just dial back to the earlier part of the century when he made a pair of aces with Steven Spielberg (”War of the Worlds” and “Minority Report”). The pleaser he notched last summer with “Oblivion” also served as an ominous and unintentional foreshadowing of things to come in “Edge of Tomorrow.” 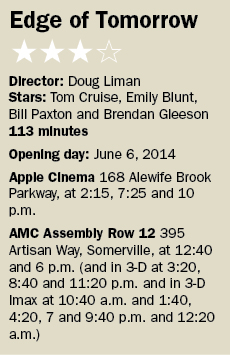 Besides being set in a harsh future where the threads of humanity claw and scrape to hang on, the two films boast multiple Toms. In “Oblivion” his Jack Harper is one of two human agents on a toxic Earth running seawater siphons to feed the rest of humanity on a housing platform in the near atmosphere (there’s more to it than that, and it’s a worthy watch) before coming shockingly face to face with another Jack Harper. In “Tomorrow,” Cruise is Major Cage, a cocksure military PR man who gets placed frontline in the battle against an invading alien species sweeping through Europe and poised to eradicate all of mankind – and he can rise from the dead. Cage can’t stomach the sight of blood and has never seen combat, but he gets demoted to private and injected into a troop of misfits as presumed fodder for the invading Mimics, which look like giant angry dust bunnies with metallic tentacles and a lion-like mug, when they take the beaches of Normandy. That presumption proves correct – initially – but after Cage gets laid to waste by an angry Alpha Mimic, he’s somehow imbued with the ability to pop back to life 24 hours before his expiration, or something like that.

The unexplained invasion takes place in the short near future (it’s based on the Japanese novel “All You Need is Kill”) and the worldwide military structure in place has responded with armed metal exoskeletons (think Matt Damon in “Elysium”) that allow soldiers to go iron fist-to-tentacle with the whirling dervishes of death. The one hero of the nascent campaign is a woman known as the Angel of Verdun, an elite combat soldier named Rita (Emily Blunt) who has taken out a few hundred Mimics in her robo-suit, but even she doesn’t get far on the beaches of Normandy. It’s up to Cage to keep coming back to get her and advance her so she can ultimately take out the mother of all a Mimics – a big pulsating brain referred to as the Omega.

Essentially what you get is director Doug Liman (a few of the “Bourne” movies and “Swingers”) channeling  the invasion scene from “Saving Private Ryan” against a “Starship Troopers” foe and with a “Groundhog Day” reset. If that sounds semi-hokey – and it is if you put your mind to the task – the charm here is all Cruise. His Cage is combat unworthy at first, but as he dies over and over he becomes imbued with foreknowledge and is trained by Rita, who is in on the time loop conundrum. The recursive plot serves up some great gems, most with a clever comic edge. Cage survives on base and beach by rote timing of events, and once he solves one dilemma it’s a pleasure to see the next unforeseen, such as when he finally, successfully dodges a missile it’s the flaming carcass of a falling fuselage that takes him out. The script, by Christopher McQuarrie (“The Usual Suspects”) bears a sense of humor and tongue-in-cheek game, most of which flows through Bill Paxton’s “Full Metal Jacket”-worthy Sarge and the thuggish misfits who tough-love squeaky-clean Cruise into combat readiness. Cage’s foreknowledge of a covert poker game and injections into Paxton’s fire and brimstone soliloquies offer increasing dividends, and the time-flipping plot never becomes cumbersome or confusing. It’s a tribute to writer and director, but mostly Cruise. Tom has stood the test of time, proving that true stars are hard to kill.