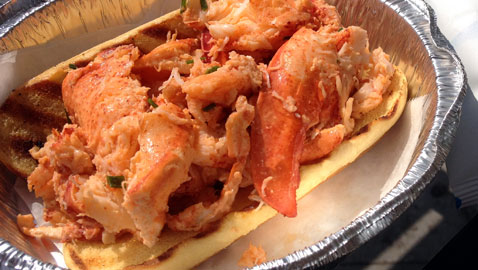 Don’t listen to the alarmists. Summer isn’t over yet. And maybe the best way to fight the fact you got back weeks ago from traveling and fall is rumbling nearer is to embrace the fact it’s still outdoor-dining weather and choose that most summery, beachy and vacationy (hey, it’s summer; we’re giving the dictionary some time off) of meals for a lunchtime break: the lobster roll.

This is not a meal people consider under normal circumstances; it doesn’t make it into reasonable debates such as whether to get the fish and chips or shepherd’s pie, any more than Las Vegas is an option equal to the Grand Canyon or Mount Rushmore. No, you go to Las Vegas for wholly different reasons, just as the lobster roll stands on its own as a destination food, rather than as an option. It’s simple and light yet just costly enough to seem like an extravagance, befitting a season when the rhythms and rules change, and being in New England we have plenty of choices. (And three of the five places to eat mentioned here are near ice cream shops. After sitting in the sun with your lobster, you may want to extend your mini-vacation.)

Not every lobster roll meal is equal, though, and here we look at various factors: How much you get on your plate for how much money you hand over, the quality of what you’re served and how it handles as takeout – and the nearest place to sit down and enjoy your summer on a bun. These are listed in order of our largely subjective suggestions, based on the factors run through in each entry. 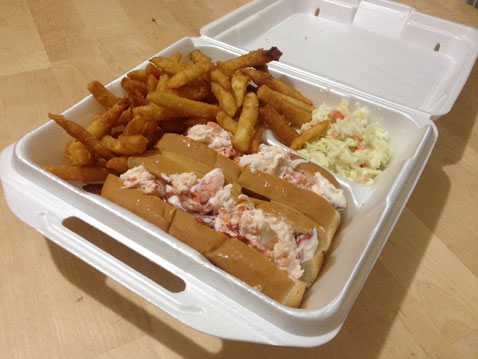 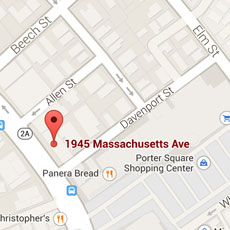 Newtowne Grille Food & Spirits, 1945 Massachusetts Ave., Porter Square.
Cost: $13.95 (or $14.93 with taxes)
Gets you: Two lobster rolls, sweet cole slaw and french fries.
Quality: There’s a generous amount of cool lobster atop these toasted “New England style” hot dog buns – meaning the kind that look like flat, split slices of bread – in a dynamic mirrored by the sizzling hot, savory fries served beside a perfectly contrasting cold slaw.
Where to take the food: Go two blocks down Massachusetts Avenue to Porter Square to find seats by Dunkin’ Donuts or Emack & Bolio’s ice cream (for after?) or by the T stop on either side of the avenue. Porter is always a little grimy, but the pleasure of a meal this good yet cheap will compensate.
Note: You have a 33 percent change of surly counter help, but it’s worth it. Newtowne’s takeout counter is a hidden-in-plain-sight townie gem. 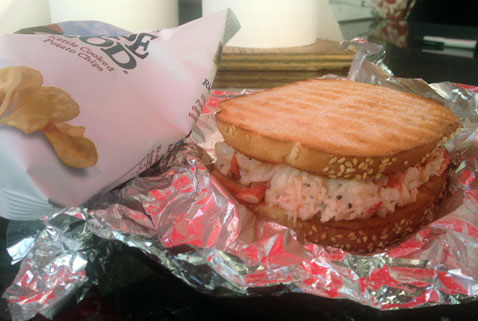 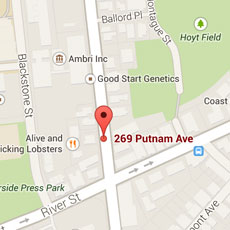 Alive & Kicking Lobsters, 269 Putnam Ave., Riverside.
Cost: $15.95
Gets you: One lobster sandwich, a one-ounce bag of Cape Cod potato chips.
Quality: Alive & Kicking deserves its raves for the sheer amount of lobster chunks and its freshness and purity, all clenched somewhat magically (and uniquely) between two slices of toasted white bread.
Where to take the food: There are tables at Alive & Kicking, but you can also walk back up River Street toward Central Square and take a left on Montague Street to get to Hoyt Field, where you can hunt up a table or bench, or walk down River Street to the even more pleasant Riverside Press Park.
Note: For the love of god, don’t call it a lobster roll. It’s a lobster sandwich. Please observe the T-shirt saying so at this ramshackle residential restaurant some 17 minutes’ walk from Central Square, although the visual aid matters not at all if you call ahead to try to avoid up to a 25-minute wait standard on weekends. 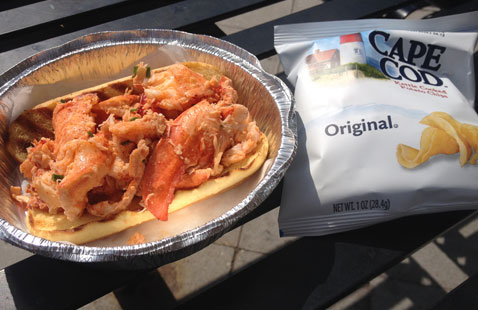 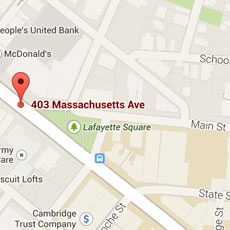 Cafe Luna, 403 Massachusetts Ave., Lafayette Square (near Central Square)
Cost: $17 (or $18.19 with taxes)
Gets you: One lobster sandwich, a one-ounce bag of Cape Cod potato chips.
Quality: This is the purest lobster after Alive & Kicking, and it comes bulging out of a soft, warmed yellow roll in astonishingly huge chunks with the barest touch of mayonnaise and chive.
Where to take the food: Jill Brown-Rhone Park is Cafe Luna’s front yard, and this plaza holds all the sunny tables and wide planter benches you could ever want to sit at. Bring chess pieces to entertain you (a few of the tables have a chessboard built in) and afterward you can get some ice cream at Toscanini’s on the next block up Main Street.
Note: The outgoing, neighborhood-style counter help set you up with fork and knife so you can eat some of the lobster chunks directly or take care of any that fall out of your roll. It’s going to happen. 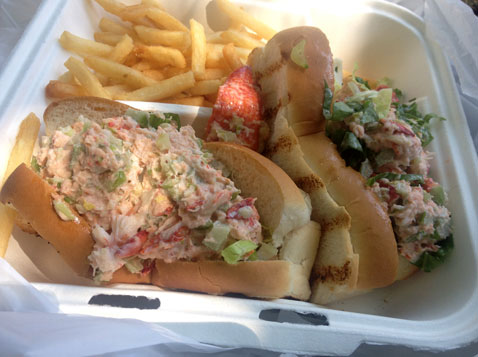 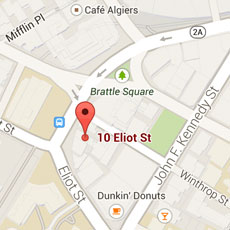 Charlie’s Kitchen, 10 Eliot St., Harvard Square
Cost: $13 (or $13.91 with taxes)
Gets you: Two lobster rolls and fries.
Quality: This is a lobster salad roll, not just lobster, and that means there’s a lot of celery and shredded lettuce mixed in with the lobster into a mayonnaise-based lobster slurry. There are a few solid, serious lobster chunks in there, and it tastes okay, but this salad served on barely toasted New England-style hot dog buns is also pushed up to the top of the roll by more lettuce at the bottom, and it gets sloppy fast.
Where to take the food: There are benches across the street by a bus stop, nicer grassy areas in Brattle Square (basically an intersection in the larger Harvard Square) to the north and you can take a U-turn down Winthrop Street to Winthrop Park only a block away, with benches, grass and a stone platform to sit on.
Note: Takeout food is picked up at the ground-floor bar. 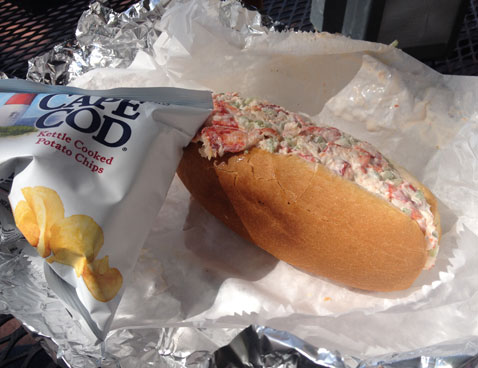 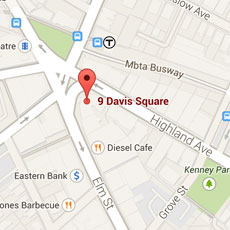 Mike’s Food & Spirits, 9 Davis Square, Somerville
Cost: $12.95 (or $13.86 with taxes)
Gets you: One lobster roll and a half-ounce bag of Cape Cod potato chips.
Quality: This lobster goes heavier on the mayonnaise than many in the area, with celery mixed liberally in. Worse, while the lobster salad bulges out the top of the nicely toasted roll, that’s because there’s a bunch of iceberg lettuce taking up space at the bottom.
Where to take the food: Eat in Mike’s outside dining area or walk over to the plaza in the heart of Davis, where there are benches, tables and other places to sit. There’s a J.P. Licks on the plaza where you can get ice cream afterward.
Note: This is a Davis Square institution with a massive menu, so the lobster roll hardly stands out as any more important than the next 100 items – and you won’t stand out as any more important than the 100 people in line around you. Be prepared to wait in good spirits.

Plenty of restaurants in the area have lobster rolls, but not all lend themselves obviously to takeout. And some that do also charge market rates. We called to find out the before-tax price of three takeout lobster roll options Tuesday and list them here in alphabetical order: