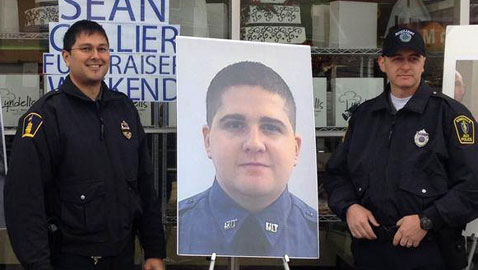 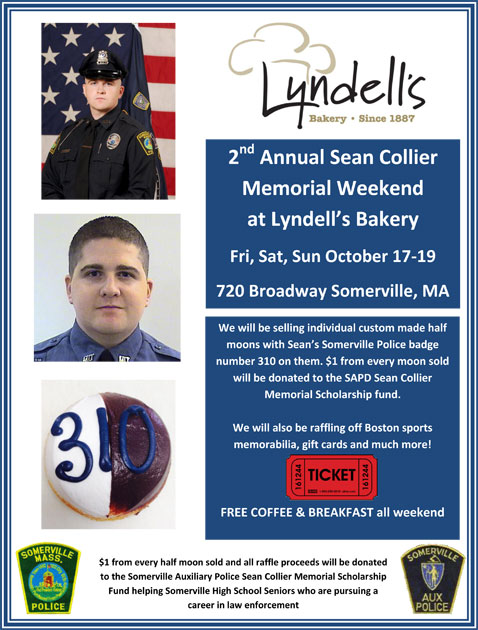 A fundraiser in honor of Sean Collier is back today through Sunday at Lyndell’s Bakery in Ball Square, Somerville.

The 127-year-old bakery plans a weekend sale in which sales of its half-moon cakes – dedicated to Collier and with his expected “310” badge number written on them in icing – go toward the fund. A dollar from every $2 half moon sold will be donated to the fund, said Dave Galatis, of the bakery’s founding family.

“Please come out and help us raise money and honor a local hero,” Galatis said on the bakery’s Facebook page. He appeared Oct. 9 on the community television program “Greater Somerville” with Chief Jerry Carvalho of the Somerville Auxiliary Police Department and host Joe Lynch to talk about the fundraiser:

In addition to the half-moon sales, there will be a weekend-long raffle including autographed sports memorabilia, gift baskets and gift cards from local businesses including Redbones, Highland Kitchen and Ball Square Wine & Liquors, and free coffee and breakfast will be served throughout, he said.

Collier, at the time a 26-year-old Somerville resident and police officer at the Massachusetts Institute of Technology, was killed April 18, 2013, in the aftermath of the Boston Marathon bombing – two months from a likely Somerville job offer after scoring high on the civil service exam.