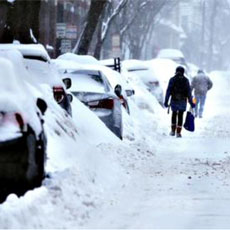 To deal with the nearly 90 inches of snow Cambridge has received over the past three weeks, the city is taking “extraordinary measures” to maintain emergency vehicle access to all roadways, Ini Tomeu, the city’s public information officer, said in an email late Monday.

There’s so much snow clogging city streets that public safety officials are converting some to one-way streets temporarily, starting in East Cambridge, Tomeu said. The program could “potentially expand to other streets as feasible” over the next few days.

In addition, the Snow Emergency Parking Ban that began at 7 p.m. Saturday “will remain in effect until public safety officials determine it is safe to lift,” and snow removal and hauling work begins again throughout the city at 9 p.m., with more than 100 pieces of equipment on the road, she said.

A team of operators will use bobcats, loaders and dump trucks to remove piles of snow, most particularly on corners and dead-ends as directed by consensus among Public Works, police, fire, emergency communications and city transportation experts “that widening the street is critical for maintaining emergency access and that standard plowing and salting operations is insufficient to achieve that access,” she said. “Given the huge volume of snow, the city is unable to provide removal and hauling at all streets.”

Also, Tomeu made clear, there is a different standard than might be expected in a more typical winter: Not all snow on a street will be removed; clearing will be done to ensure emergency vehicle access.

“Removal and hauling is primarily an overnight operation due to traffic challenges during daytime hours, though certain locations may be done during the day if feasible. This work is expected to take numerous evenings to complete, and may continue into next week,” she said.

The days will stay cold, according to forecasts, but there is only light snowfall expected this week: one to three inches Tuesday and perhaps an inch Saturday.

City offices and programs will be open Tuesday. Trash and recycling pickup is a day behind schedule for the week because of Monday’s Presidents Day holiday.

Here is a list and map of streets where parking is prohibited during the emergency ban; a map of replacement off-street parking for residents during snow emergencies is here.