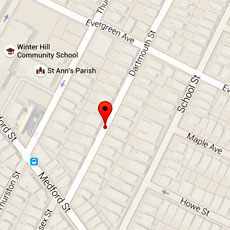 The man accused of invading a day care, attempting a kidnapping and struggling with police will be held in custody until his next hearing in June, a judge decided today.

At about 9:15 a.m Tuesday, the Somerville Police Department responded to a call at 17 Dartmouth St., Unit 2, for a report that a man had kicked the front door open to a day care center. The man, later identified as Corbelli, hit a woman, made contact with two children and, when police arrived, had one child in his arms, according to the office of Middlesex District Attorney Marian Ryan.

Police officers say Corbelli resisted arrested before he was subdued at the scene, describing the scene to media as officers arrived:

The sounds of screaming and struggling could be heard coming from inside. [Corbelli] had both of his arms around the child in a bear hug. The child was visibly in distress … At one point in the struggle, Corbelli managed to grab an officer’s gun. A protracted, violent struggle involving five to six officers took place in a narrow hallway on the second floor. In the struggle to subdue him, one officer was injured.

Neither of the children were hurt, police said. At least one was a 1-year-old.

Corbelli lives in the same building as the day care center. As of Wednesday afternoon, Ryan’s office couldn’t say whether he’s related to one or both children involved in the incident. The office doesn’t comment on whether suspects are being evaluated for mental status, said Jacquelyn Goddard, deputy director of communications for Ryan.