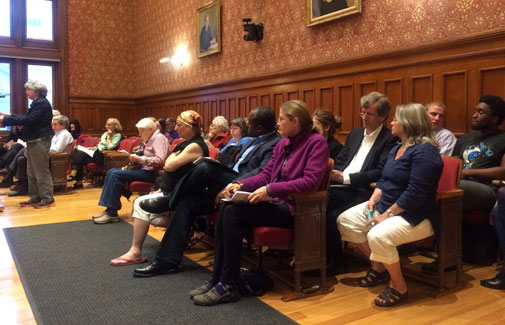 Many speakers on the Mass+Main building proposal persisted well into the second hour of comment at Monday’s meeting of the City Council. (Photo: Marc Levy)

The vote came after more than two hours of public comment and another two-plus hours of city councillor debate, questioning of the developers and their attorney, and on-the-fly modifications of legal language. Even with approval, there will be another two to three years of design review and construction before the tower can accept tenants, said the developers’ attorney, Anthony Galluccio.

In a bid to ensure passage of the special zoning, developers Normandy Real Estate Partners and Twining Properties offered four sweeteners Monday, potentially delaying or encouraging a City Council vote intended to take place in a matter of hours. But the matter was handled, taking up most of a 5.5-hour meeting.

“Not to be making a threat”

The document listing the offers arrived well into the meeting about razing single-story Quest Diagnostics laboratory space in favor of the residential tower, making 47 of its 232 units available for rent below market rate. Of that 20 percent, most would be considered affordable; the remaining seven would be considered middle-income.

Late in the meeting, when councillor Craig Kelley asked Galluccio what would happen if the council didn’t approve the project that night – although the zoning petition expires May 27, there is no meeting on the Memorial Day holiday of May 25 – the reply from Galluccio was that, “not to be making a threat, but this is an office building, quickly” as a Plan B if the developers were shut down on the current plan to build housing.

Kelley, saying he was “looking at a choice between office and lab space and this proposal,” affirmed that he supported Mass+Main.

A policy order addressing that conflict – saying special permits would be denied for any area “building where more than half of the new or substantially rehabilitated [construction was] intended for office or laboratory use” – was offered April 13 by councillors Carlone and Mazen, but every other councillor voted against it because they felt its writers hadn’t consulted their peers adequately.

Their votes in opposition Monday came after expressions of uncertainty about various aspects of the zoning. Mazen said a sticking point for him was the lack of investigation into whether economic “displacement” resulting from the arrival of the building would hurt more lower-income residents than were helped by its 47 units and recently added sweeteners.

giving the city the front part of 65 Bishop Allen Drive for the creation of even more affordable housing when the city identifies a “transferee,” and so long as as the developers get to keep the rear portion of the lot for parking and get their special permit. Later the conveyance of land was explained as coming after five years, when the developers felt confident they could give up the roughly 20 parking lots without affecting their tenants.

promises to set up an advisory committee to give input on which retailers get ground-floor shop space created by the Mass+Main project and programming for the seasonable public market that would be given a home. The advisory committee would meet annually for 10 years.

at least 8 percent of units in the proposed tower will be “micro-units” between 350 and 550 square feet, whose tenants won’t get to apply for a residential parking permit for a car.

The city gets the additional considerations if “no challenge” to them is made, or if a challenge is beaten back, and of course if the rest of the developers’ special permit goes through.

Such sweeteners are common in Cambridge development politics, and some residents speaking to councillors just after the document was passed out to the standing-room crowd commented on their appearance now.

“The last and best offer apparently wasn’t,” Heather Hoffman said, suggesting that councillors let the vote ride another to the next week’s meeting to give people time to consider the offers. “What else can you shake out of this allegedly empty pocket?”

Nancy Ryan said she hadn’t intended to speak, but was prompted to by getting the developers’ list of offers.

“You must delay,” Ryan told councillors, saying, among other issues, that the micro-unit language was troublesome because it set a minimum number, but not a maximum.

But Galluccio said the offers were all items that had been discussed over the past months and came in response to councillors’ wishes. “I apologize if this gives the impression of a last-minute deal,” he said. “None of these are last-minute deals, councillors.”

This story will be updated.