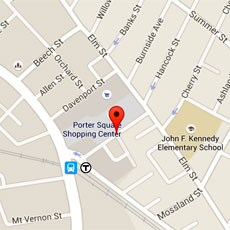 Cambridge Police are seeking a suspect involved in the stabbing of a Somerville resident at about 10:32 p.m. Tuesday in Porter Square.

“The victim was stabbed in the arm with a knife after a verbal exchange between the two known parties,” said Jeremy Warnick, director of communications for Cambridge police.

Police found the victim standing and bleeding from his left arm on White Street, where he was treated for non-life-threatening injuries and taken to a local hospital. “The suspect and another known party left the scene on bicycles and headed north on Massachusetts Avenue,” Warnick said.

An arrest warrant has been issued for Stephen Picard, 45, homeless, on charges of assault and battery with a dangerous weapon. Picard is described as a white male, heavy-set, wearing glasses and an orange shirt and often seen riding a mountain bicycle.

This is the second stabbing this month following an argument. In the May 8 incident, a man waiting for a ride-share service near a Mid-Cambridge bar tried getting in the wrong car and was stabbed, leading police to arrest a 65-year-old Belmont resident. The victim had been stabbed in the stomach.

If members of the public do come across Picard, police asks that they do not approach him, but immediately call 911 or (617) 349-3300.  Crime tips can also be sent anonymously via phone, email or text message by visiting www.CambridgePolice.org/Tips.