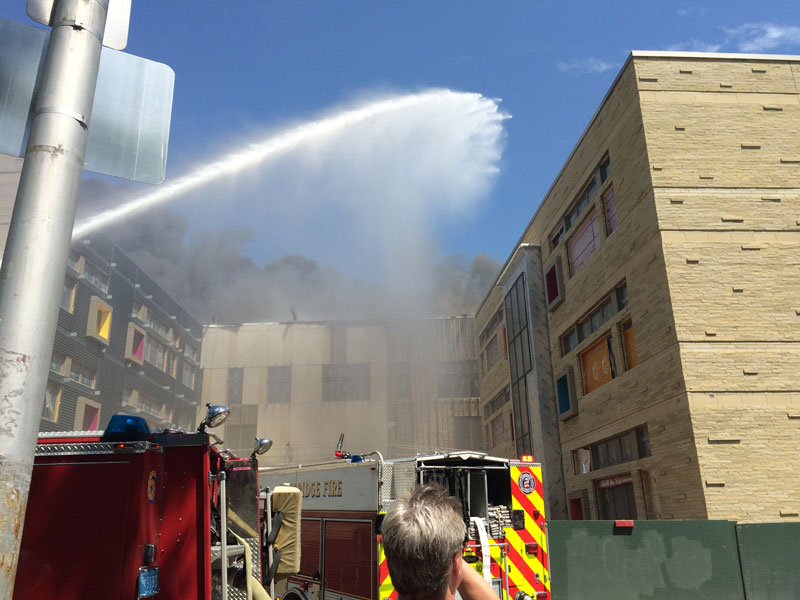 A three-alarm fire broke out briefly at the Martin Luther King Jr. School project on Putnam Avenue today, with combustible roofing materials being a suspect. The bulk of the building is unharmed.

The construction project at 100 Putnam Ave. was reported on fire around 1:54 p.m., said Jeremy Warnick, director of communications for Cambridge police. A half-dozen fire apparatus gathered to spray water and extend ladders to the roof for access. A Somerville fire vehicle responded as well, and the fire seemed to be well under control by about 2:30 p.m., with Warnick reporting it was knocked down at about 2:53 p.m.

Renovations of The Dr. Martin Luther King Jr. School are under way for a September opening at a cost of about $84.5 million. Cambridge Fire Department Assistant Chief Gerard E. Mahoney said the fire, including extensive smoke damage on the third floor, was estimated at about $2 million to $3 million, “and it could be a lot more.” A statement issued later in the day by Lee Gianetti, the city’s director of communications and community relations, put initial damage estimates at about $2.5 million. Gianetti affirmed:

“Damage to the roof is significant and the Cambridge Fire Department estimates that the roof covering and insulation, and a number of HVAC units will need to be replaced. Additionally, the third floor of the building has significant smoke and water damage.”

It was unclear whether the damage would affect the school’s opening date, with Maher mentioning, “they haven’t even started an investigation yet.” But with the school calendar not beginning until Sept. 8, there are three months for repairs to be made and time to be made up.

Gerald Yung, principal at the school, watched the end of the firefighters’ work from the sidewalk by Peabody Terrace housing, saying he was optimistic that the building would open on schedule, and Rossi said there was “no reason for us to believe that today’s fire will impact the proposed schedule for the King Open and Cambridge Street Upper Schools & Community Complex Project.”

“The firefighters on scene today did a great job extinguishing this fire given the difficult conditions. The city will need to conduct an assessment of the damage caused by today’s fire before we can understand any impacts that it may have on the opening of the MLK Jr. School. We will provide the public with an update once the evaluation of the building is completed.”

“All the workers in the building got out safe. There were no injuries, so that’s a good thing,” Maher said. Although there were several onsite, Mahoney believed no workers were on the roof at the time the fire started.

The cause of the fire wasn’t yet clear, but after discussion with Mahoney, the mayor noted that there was work on the roof being done, and “those materials are highly combustible.” High winds contributed to the difficulty of fighting the fire, Gianetti said.

“It’s really unknown,” Mahoney said, noting that it wasn’t even clear that there was power to heating and air conditioning equipment that could have contributed. The State Fire Marshal’s Office will be working with city fire investigators to determine the cause of the blaze.

As to whether the fire may have been purposely set or in any other way suspicious, Mahoney said it was too early to say.

“So sad,” resident Jenn Sutkowski said via Instagram. “They were almost done building it.”

The fire, with its billowing black smoke visible for miles, happened the same day that Veolia Energy conducted “steam blowing” at its Kendall Station power plant – a cleaning procedure that results in large clouds of steam that people sometimes mistake for fire. 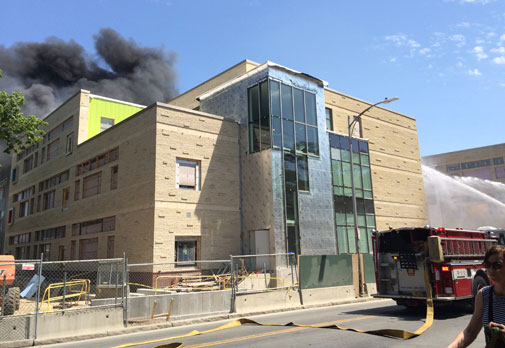 Smoke billows from the school roof at around 2 p.m. Saturday.